A nod to brewing history is back on display in Reading, PA 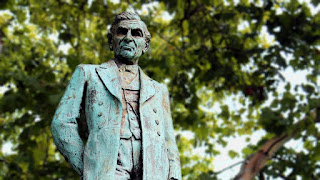 (photo credit: Brewers of Pennsylvania)
There are casualties during every Philly Beer Week. Often times they are related to missed e-mails and missed events. This one was out in the home turf of my youth, Berks County. Sorry to have missed the unveiling, but still nice to hear of this happening. Cue the press release. (and also, a nice news video from WFMZ)

Frederick Lauer Monument Restoration Complete
Rededication Ceremony Set for Friday, June 8th
HARRISBURG, PA (6.4.18) – After more than two years of committed work, the Brewers of Pennsylvania, the state’s official brewers guild, announces today that the Frederick Lauer Monument in Reading’s City Park has been restored. Lauer, the first national president of the U.S. Brewers Association (BA) is considered to be one of the early driving forces in establishing what would eventually become modern day brewing.

To commemorate the brewing pioneer’s trailblazing leadership and dedication to the local community, the BA constructed a monument in his honor in 1885 and gifted it to the City of Reading. It was the city’s very first statue. In early 2015, the monument was vandalized, and four bronze plaques were removed from its base. In 2016, the BA, the not-for-profit trade association dedicated to small and independent American brewers, donated $25,000 to Reading to restore the statue and the Brewers of Pennsylvania (BOP) collected donations from local breweries for repair work. In 2018, the BOP also donated $3,000 to the restoration project. The final round of fundraising came in the spring of 2018 when members of the Berks Brewers Guild produced a collaboration brew, Lauer’s Fellowship Ale. For each pint sold, participating breweries donated $3.50 to complete the restoration. The group raised over $5,000.

“As the state’s official brewers guild, the BOP felt it was our duty to do our part in helping restore the
monument honoring Frederick Lauer, a local and national icon whose dedication to the craft of brewing beer helped pave the way for so many of our members as well as those beyond our Association from coast to coast,” said Chris Lampe, President of the Brewers of Pennsylvania and Co-owner and Production Manager at Weyerbacher. “Those who understand the craft beer industry know we all stick together, and we consider it a privilege to have teamed up with the Brewers Association and the Berks Brewers Guild in restoring this important piece of history.”

The first phase of the restoration project was completed in 2016, and involved replacement of the stolen bronze plaques and preservation work to the statue. This second phase focused on releveling the stone post and pier base, which had settled unevenly over the years, as well as replacement of the soil at the base, improvement in the drainage inside the base, and replanting the area with Sweet Woodruff, which will eventually spread and provide an attractive and low-maintenance groundcover. In addition, decorative stone was set in place to beautify what had previously been unattractive exposed stone aggregate beneath the statue.

Born in Germany in 1810, Lauer immigrated to the United States at age 12. He learned the brewing
process at an early age from his father. By age 16, he was foreman for his family’s brewery, and at 25, he became the brewery’s proprietor. For decades to follow, through innovation, hard work and business savvy, Lauer established himself as a brewing pioneer not only locally, but throughout the country.

Lauer’s commitment to pioneering the brewing industry was matched by his devotion to Reading. As
noted by the Berks History Center, Lauer was a key figure in changing Reading from the status of a
borough to a city in 1847. He helped to organize the Berks County Agricultural Society and the Board of Trade. Lauer also helped finance the Reading and Columbia Railroad, and he was a member of several charity groups, including the Reading Dispensary, Reading Relief Society and Reading Benevolent Society. His dedication to civic involvement led him to donate part of his seven-acre lot so that it could made into a park for community recreation.

About the Brewers of Pennsylvania - The Brewers of Pennsylvania is a 501c6 trade association that brings together leaders of Pa.-based breweries in order to promote and protect the brewing industry in the state. The Brewers of Pennsylvania, a strong and influential organization, serves the consuming public of Pa. by encouraging brand diversity in the market. BOP members employ an estimated 10,000 employees earning $296 million in wages and generating $1.1 billion in direct economic benefits to communities throughout the state. Its signature annual event is the popular Meeting of the Malts. #supportPAbeer
© Bryan J. Kolesar and The Brew Lounge, 2018. All content is owned and uniquely created by Bryan J. Kolesar. Unauthorized use and/or duplication of this material without express and written permission from Kolesar is strictly prohibited. Excerpts, images, and links may be used with advance permission granted and only provided that full and clear credit is given to Bryan J. Kolesar and The Brew Lounge with appropriate and specific direction to the original content. Contact Kolesar at TheBrewLounge@gmail.com