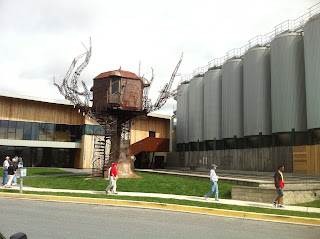 While Dogfish Head is on my mind, particularly after dabbling in its Philly Beer Week annual collaboration with a Belgian brewer — in this year's case, it was Browerij De Brabandere — it reminded me to pass along one of the more recent press releases I've received. This one announcing the current status of DFH's growth in its home state of Delaware over the last three years. If you visit Rehoboth Beach, you likely are already aware. If not, read on.


Dogfish Head Celebrates Completion of Three-Year Journey Bringing Together all the Goodness in Rehoboth
Opening of new courtyard, merchandise store and brewing and distilling systems

Rehoboth Beach, Del., May 29, 2018 – After 23 years of serving original beers and spirits, wood-fired food and world-class music, Dogfish Head is embarking on a new era of creating more goodness as they celebrate the completion of a three-year journey at the location where it originally began on Rehoboth Ave.  The beautifully landscaped courtyard, new brewhouse and distillery operations, and Off-Centered EmPOURium store is the final stage in bringing together the downtown restaurants,  Brewings & Eats – an off-centered brewpub, and Chesapeake & Maine – a geographically inspired seafood restaurant, and establishing it as the heart for all things Dogfish.

The project commenced in 2015 when they first began construction on Chesapeake & Maine, then went on to build a new, world-class Brewings & Eats in the former parking area. Dogfish then tore down the original pub to make way for the new courtyard and operational enhancements. “From the world-class stage to the killer brewing and distilling program, guests can truly experience 360° of Dogfish in the same place we first began our story in 1995 as the smallest craft brewery in America,” says Sam Calagione, CEO and founder of Dogfish Head Craft Brewery. “I’m most proud that over the years we’ve been successful in building our Rehoboth restaurant brands as top beer destinations in the Mid-Atlantic region, and by coming together, and connecting our beer, food, spirits, music and merchandise – we can provide a world-class, panoramic, multi-sensory experience for folks to enjoy at our downtown properties.”

The charmingly landscaped, dog-friendly outdoor patio area seats 36 guests and serves as a passageway connecting Brewings & Eats and Chesapeake & Maine. The menu offers a full selection of food and drink offerings from the pub.  With a rustic wooden exterior and large glass windows framing the courtyard, the gathering space offers behind-the-scenes views into the brewing and distilling production areas along with allowing guests to see bartenders and mixologists serving drinks and chatting up customers through the windows of both restaurants.  Nestled in the corner of the patio is a beautiful, 14-barrel mash tun dating from the late 90s.  Handcrafted in the UK, this wooden relic was Calagione’s dream mash tun back in the day when he first opened the doors for business in Rehoboth.  When the opportunity to purchase the brewing equipment became available, Calagione jumped at the chance to bring it home to Dogfish and plans to incorporate it into the off-centered outdoor garden as a beer-inspired rain barrel of sorts.

To celebrate the opening, Dogfish Head Distilling Co. is debuting Lemon & Peppercorn Vodka, a spirit that captures the essence of both restaurants as it contains the quintessential seafood seasoning found at Chesapeake & Maine, with a wood fire smoked twist done at Brewings & Eats. Using Analog Vodka as the base, they distill dried lemon peel and a medley of peppercorns. This citrus-peppery spirit is used to macerate hand-sliced, wood-fire grilled lemons from Brewings & Eats. Lemon & Peppercorn Vodka will be exclusively available in the restaurants.

For those looking to take a little bit of the Dogfish Head universe home, guests can swing into the Off-Centered EmPOURium to purchase Dogfish merchandise, including exclusive Rehoboth t-shirts, hoodies and hats. Folks can also find keychains, stickers, coasters and glassware.  Keeping the spirit alive from the original Brewings & Eats, the counter top in the Off-Centered EmPOURium is the old bar top from the 1995 pub.  Bike racks and stroller parking are also available.

For more information about Dogfish Head Craft Brewery, Dogfish Head Brewings & Eats, Chesapeake & Maine and the Off-Centered EmPOURium, visit dogfish.com.
Dogfish Head:
Dogfish Head has proudly been focused on brewing beers with culinary ingredients outside the Reinheitsgebot since the day it opened as the smallest American craft brewery 23 years ago. Dogfish Head has grown into a top-20 craft brewery and has won numerous awards throughout the years including Wine Enthusiast’s 2015 Brewery of the Year and the James Beard Foundation Award for 2017 Outstanding Wine, Spirits, or Beer Professional. It is a 300+ coworker company based in Delaware with Dogfish Head Brewings & Eats, an off-centered brewpub and distillery, Chesapeake & Maine, a geographically enamored seafood restaurant, Dogfish Inn, a beer-themed inn on the harbor and Dogfish Head Craft Brewery, a production brewery and distillery featuring a tasting room and food truck.  Dogfish Head supports the Independent Craft Brewing Seal, the definitive icon for American craft breweries to identify themselves to be independently-owned and carries the torch of transparency, brewing innovation and the freedom of choice originally forged by brewing community pioneers. Dogfish Head currently sells beer in 42 states and Washington D.C. and will expand into additional states in 2018. For more information, visit www.dogfish.com, Facebook: @dogfishheadbeer, Twitter: @dogfishbeer, and Instagram: dogfishhead.