The Brewer's Art in Baltimore, MD

Although this visit to The Brewer's Art was made all the back in the first week of August, it made such a favorable impression on me that I feel compelled to write about it even now. And, of course, the more I dwell on it the more I want to schedule a follow-up visit a.s.a.p.!

My visit came before we got this site up and running, so I don't have any pictures to post except for the ones that I lifted off of their site. I was in Baltimore on a day trip for business and I didn't complete my business day until around 4 p.m.

So, what to do? Of course, I could get on the road and try to get a jump on rush hour traffic. Eh, boring. Or I could reward myself for a good presentation with a trip to The Brewer's Art to sample their beers which I've only flirted with from afar in Philly.

I believe until that point, I only had their beers at the Bishop's Collar bar in the Fairmount section of Philadelphia. Plus, the reputation of the Ozzy beer and the Resurrection are well documented. The only thing I'm left curious about is the name of the brewery and their website name.......Brewer's Art and belgianbeer.com. Hm, I just can't get comfortable with the use of those names, but I digress. I can get way comfy with their beers, so here goes :)

I was their first customer of the day as they opened their doors at 4 p.m. They are a bit off the beaten path, north of the downtown area of Baltimore and on the

way to the Johns Hopkins University. I was a little skeptical of the area, not in a scared kind of way, but there's really nothing else in the area to draw you there except for the bar.....so, I park the car and inside I go. It was a sweltering hot day, so the frigid air conditioning was a relief.

The "front of the house" (actually, it is a converted rowhouse) is a comfy bar/lounge area, perfect for grabbing some after work brews and light food. Natural light (no, not the beer) pours in through large windows facing Charles Street. The middle room provides some more comfortable seating while the back room serves as the dining room. Downstairs is a dark and cozy bar area which reportedly gets quite popular later in the evening. As you probably tell from this paragraph, my overall impression of the ambience is....comfortable! 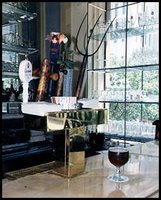 Well now on to the beers. I got quite a bit of attention in my first hour as the only customer at the bar. As the bartender was prepping the bar for the evening, he was pleasant to chat with me about the brewing operations, the beers, the food, and the Baltimore beer scene (which I believe is greatly improving as of late).

I started with the Ozzy because I have such fond memories of it. It most certainly is a good start as a full-flavored Belgian ale. (Think how quickly this beer disappeared since I had been speaking all day long!) I then moved on to a couple of unknowns, the Wit Trash (witbier) and Sluggo (APA). Both lacked in flavor and body and were otherwise forgettable.

I then moved to another that I had only heard of previously....the Proletary Ale. While I remember it being a dark and heavy beer, I don't recall much else about it. However, it was still a major improvement over the previous two. Then, I figured if I was going out, then I was going out with a bang.....with the Resurrection and the Ozzy (again, ha!) I've had the Resurrection (dubbel) in Philly and was so happy to again have this mouthful of barley malt bursting with flavor. It's a tough call between this ale and the Ozzy for my favorite beer from The Brewer's Art.

Oh, and in the middle of all this beer, I did manage to have some food! Dinner hadn't yet started but I tried some bar food. Actually, a bit better than typical bar food, I had an overflowing, seemingly bottomless, bowl of plump mussels in a delicious broth. Also, an order of fries (regular and sweet) and leeks with a tasty side of aioli dipping sauce. Unlike my experience at Dogfish Head Alehouse in Montgomery County, MD, I was able to take growlers of beer home with me. Fortunately, I had called ahead on this topic and learned that they'll fill your growler for you.....but they don't supply any of their own. So, phew, I brought two growlers with me for some more Ozzy and Resurrection at home, woohoo!

Soooo, the moral of the story here is when in Baltimore, leave the Inner Harbor and head north to The Brewer's Art. This is definitely beer that I wish we had better access to in Philly. I suppose, though, that it makes it all the better when I do finally get the chance to have some of their brews. And from what I understand, the relatively new chef is making high marks by turning out decent dinners from the kitchen. You should not be disappointed.

Ressurrection Ale is regularly on tap at North 3rd and I have also seen it recently at The Abbaye, in Northern Liberties.

It shows up occasionally at Bishop's Collar. And, I've seen it somewhere else recently, just not sure where...maybe The Drafting Room in Exton last week..not sure.

Thanks for the tips; it sure is a nice beer!

FYI - the restaurant is in the northern part of the "Mount Vernon" section of Baltimore - yes, this area is "off the beaten path" if your experience of Baltimore is the the ballparks, the harbor, and the aquarium, but this section of town is known for its nightlife, restaurants, bars, etc. It's just north of the Washington Monument near the Belvedere hotel - a great part of Baltimore well worth the visit.