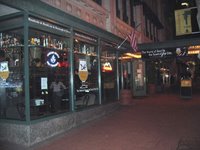 So what are two hard working business people with a bit of time to spare who just put in a long day of presentations to do in Washington, D.C. on their way to Union Station? Well, of course, stop at Dave Alexander's R.F.D. for a couple of celebration brews!

I've been here before and have read plenty about the place, but I still can't get a good handle on the name. Is it D.A.'s R.F.D.? Is it Dave's R.F.D.? Is it Dave Alexander's R.F.D.? Technically, for those who care, R.F.D. stands for Regional Food and Drink. Personally, I think this is one of the stranger names for what is hands-down one of the best beer bars that I've ever been to.

While there is a good representation of regional beers, the other couple hundred of beers are well outside the region and the country. Ok, so let's move past the name issue, right? (I hear you: "Get over it!")

The draft list is nicely varied with different styles of beer. The bottle beer list is phenomenal, boasting over 300 varieties. My colleague, Melissa, and I had some time to kill before our Amtrak train left Union Station. For anyone who knows her, they understand that it did not take any arm twisting to get off the Metro train at the Gallery Place/Chinatown stop (under the MCI Center, home of the Wizards and Capitals).

From there, it's just a short walk down the block on 7th street to Dave's. Many people will often list Dave's and Brickskeller as the two best beer bars in D.C. I tend to favor Dave's. For one thing, your first step in the door you realize that the bar area seems more spacious and inviting. We were quite comfortable dragging our baggage and shoulder bags to the bar and stashing them while we had drinks.

The second reason that I favor Dave's is for the ample selection of draft beer, as opposed to just bottles at Brickskeller. Lastly, Dave's is in a convenient location where you can easily walk between the Metro station, retail shops, restaurants, and other bars. Brickskeller, on the other hand, leaves you feeling a bit out there with not as many other options within walkable distance. 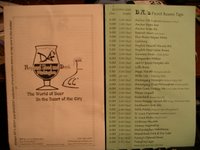 Without getting into naming specific beers available at Dave's (since just about any that you might be looking for are on the list :), I'll just mention that Melissa had this year's Anchor Christmas ale and Unibroue Maudite. I started with the Unibroue and finished with Ommegang's Three Philosophers (don't believe I've ever had it on tap). Melissa and I both agreed that the Maudite is a strong ale, although so very smooth and drinkable with flavorful hop notes. It has some of the characteristics of a belgian but with a bit more hops than you'd expect in a typical belgian beer.

So far, Dave's had not disappointed me in my visits. I highly recommend a visit if you're ever bopping around D.C., at the MCI Center for a game or concert, at the convention center just blocks away, or simply passing through like we were with some time to spare. Did I mention, it's only 2 stops on the Red Line from Union Station?

Everytime you post one of these I want to make a road trip :-)