Thirsty? What's in the fridge?

We've been lagging here for the past week. So, since I don't have anything intelligent to say at the moment, I thought I'd let you peak into my refrigerator and see what tasty beverages await. 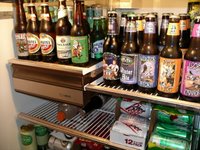 Hm, looks like some beers from Clipper City in Baltimore: Peg Leg Imperial Stout; Winter Storm Category 5 Ale; Loose Cannon Hop3 Ale. How about some Winter Ale from Blue Point on Long Island. There's a few leftover Oktoberfests like Erdinger, Paulaner, and Spaten. Then there's some two year old Rudolph's Reserve and last year's Rude Elf Reserve, both from Bethlehem Brew Works. And, of course, some old standbys like Amstel Light and Rolling Rock for the less adventurous. Whoa, wait a minute, where did those Wexford Irish Cream Ale's come from?!?! 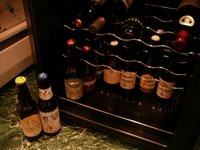 Then, upstairs sneaking into our wine cooler are some quality brews from Dogfish Head (60 minute IPA and 120 minute IPA); Rochefort 10; Chimay (all 3 varieties); La Trappe Quadrupel; and Abita Turbodog.

Oh, and just for good measure there's some Sly Fox Christmas Ale, Sly Fox Saison Vos, and Southampton Saison hanging around, but too lazy to join in the picture.

Well, that's all that I have to amuse you with for the time being. Stop by if you're thirsty ;-)

Now just where exactly is this refrigator and are there any snack foods to accompany there beverage treats. No Tetley ?

Mark...I know where they are. I'll stop and get some munchies. I get first dibs on the Rochfort