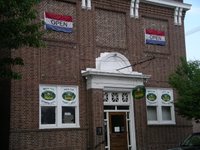 Oh, Destiny brewpub, how we hardly knew ye. This will be a short review of the short-lived brewpub in Phoenixville, PA named Destiny.

Patty and I were there just once in fall 2005. My plans had always been to return; I always told Adam that we needed to go, give it a chance, and support the local craft brew scene. But, somehow the weeks and months went by....other beers, pubs, festivals occupied our time and now Destiny has closed.

Let me start by saying that I always, deep down in my heart, wanted to give Destiny the benefit of the doubt. There were so many things I always felt were such ominous signs. (Of course, my foresight is always 20/20 ;-). But, seriously, I don't want to sound pompous about it; especially given that I have never run my own business.

From the initial design of the website announcing the plans for the brewpub and the plans for drumming up investment, it just had the wrong sound to it.....gold doubloons....really? I realize many bars have membership clubs and promotional types of things, but this just seemed too curious from the get-go.

Then, there was the location. I had a very hard time getting by the fact that the plans were to set up shop in the basement of a former Moose Lodge building. I have written before how it takes something real special to pull of a bar business below ground with no windows. You need something special about your environment to keep people interested. Otherwise, you need windows out to the world to provide distraction and entertainment.....Or, something....I don't know.

In any case, the vibe was not working, the bar was underground, my math says it is not going to work out. Finally, a comment about the service the one time that I was there.

The owner/brewmaster's nephew (I believe that was the relationship) was the bartender. We were there on a Saturday night around 9pm. Only 4 other people were there. The bartender said it would probably get more crowded, but that the business is sporadic and difficult to predict. So, he kept us company and as I plugged away at him for information about the bar, the brewing, and the history, I could tell that he certainly was not the guy you would want representing your business from behind the bar. He proceeded to paint unflattering pictures of the various brews that would not be considered "mainstream." Nothing like selling the product, eh?

This, to me, may have been the most damning part of my Destiny experience. I suppose I would have to say that of the several beers that we tried (some full, some sample size), the Dry Stout may have been the most interesting and enjoyable. The others basically just appeared to be simple, easy-drinking interpretations of their respective styles.

In a sense, I am still a bit disappointed that I never took the opportunity to go back once more and try, at least to confirm my first impressions. I must say the most interesting thing about Destiny was the incredible collection of breweriana around the inside of the bar. The walls, tables, and bar were all decorated with tap handles, posters, coasters, kegs, and trays.

From what I understand from others accounts, Emerson is a good and talented guy. I wish him well and hope to see him try something again. Though, Phoenixville brewpub market is about to get a bit more daunting with Iron Hill due to open soon.