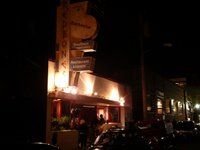 RedBones BBQ is just off of Davis Square in Somerville, MA. This means that it is easily accessible from Boston's "T". If you are in downtown Boston, or anywhere near the subway lines, just get yourself to the red line and in mere minutes (approximately 15 from downtown) you will be walking up to RedBones, home of great southern food (ribs, brisket, and everything barbecue) and even better beer (approx. 24 tap lines and many more bottles). 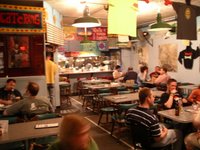 Allow me to make this statement upfront: I do not know if I would rather go to RedBones for their beer selection or their food menu. This is quite a statement to make once you understand how highly they are rated for the excellent tap and bottle list that they maintain. But, then you take a look at the food menu and it is easy to see how you can fill up on cornbread, ribs, coleslaw, etc. before you have a chance to finish even your first beer. I know, I know...you're brain is saying "tell me about the beer", but your stomach is saying "mmm, no, tell me more about the food." The food menu is stuffed with all types of southern-style delicacies. Ribs prepared every which way....Memphis, Carolina, Arkansas, Texas, and so on. Maybe you can see where this is headed....it happened to us! The thing is, even if you were not in the mood for beer (say what?!....hold on, just go with it :) you would still want to go to RedBones for an excellent dinner. 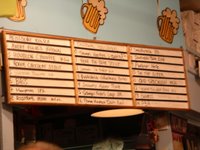 Ok, now that aside, there are a couple of dozen beer lines and many bottles to choose from at RedBones. On this particular evening, a sampling of the draft list included: Reissdorf; Avery; Rogue; Berkshire; Bear Republic; and Smuttynose just to name a few. With all of these beers to choose from, they have a unique approach for those who cannot decide. There's a large wheel behind the bar that they spin. The pointer stops on a particular beer and that is the one you get. How's that for decision-making? Though, for those of us who know what we want it's a different story. So, with dinner we chose the Reissdorf Kolsch, the Bear Republic Stout, and the Houblon Chouffe. All very tasty and great accompaniments with the feast. Unfortunately, our stomachs were filling up, time was ticking, and we still wanted to stop off at John Harvard's in Cambridge before heading back to the hotel. 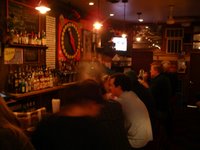 We concluded with a descent to the expansive downstairs, home to another bar and plenty more dining room seating. As you may be able to tell from the pictures, the atmosphere is very casual and very fun. The pretention is low, but the beer selection is high. We were also fortunate to have a waitress well-versed in the beer selections. 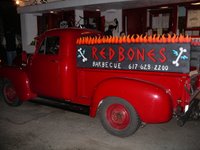 When in Boston, RedBones is surely a beer bar that you will not want to miss. Don't be concerned that it is in the neighborhood of Somerville outside of the city. It's just a short and easy subway ride away. The Davis Square and Porter Square neighborhoods rival any area within Boston and have more than enough eating, drinking, and nightlife to keep you occupied. My advice, though, would be to learn from our mistake. This is definitely a place that you will want to hang out at for a few hours. Go for a beer or two before dinner, have a nice leisurely dinner, then finish with a couple more brews. Soak up the atmosphere and don't try to visit any other establishments in the same night......unless it's The Burren across the street (but that's a different story for a different day!)
Click Here For All Brew Pub & Beer Bar Reviews
Written by Bryan Kolesar at Thursday, June 01, 2006