Back from San Francisco, but first a note for Bill Brand 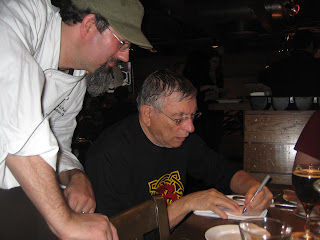 Over the next week, I'll share my thoughts of San Francisco's Beer Week.

But, first and most importantly, for those who have not heard the reports, one of the industry's respected voices was critically injured last Sunday evening after leaving a beer dinner in San Francisco.

William (Bill) Brand was hit by a San Francisco Muni Metro train after leaving the Homebrew Chef Beer Dinner at the 21st Amendment Brewery and Restaurant. For me, this came as even sadder news the following morning as I had shared a table with Bill and six others at what was a tremendous dinner of fellowship, food, and beer.

For someone with whom I'd only shared email correspondence in the past, Bill was quick to engage me as well as the others around the table. I was so pleased to finally meet him in person. He was an active part of everyone's dining experience at our table, even as he set about with his notepad to document the many facets of the evening. The beer was an equal part of the night, if not perhaps less so to him, with the food and the people and their stories. This was evident in the questions he asked as well as the frequent use of the "dump bucket" in the middle of the table.

The picture above is of him discussing the components of the evening with Sean Paxton (aka The Homebrew Chef).

After dinner, as he was leaving he made sure to turn back to me to say, "Bryan, I'll see you in Philly." I'm holding him to that and ask that we all keep him in our thoughts and prayers for a quick return to spreading the message of good beer.

For more complete coverage of Bill's progress, be sure to follow the sites listed below. As you'll see mentioned in more than one place, nightly toasts have been held in Bill's honor since Sunday. I participated in Toronado's on Monday, which was led by proprietor Dave Keane. I encourage others in the Bay Area and beyond to continue to do the same. Cheers Bill!

Bill Brand's and Jessica Yadegaran's Bottom's Up Bill's Facebook page (updated by his wife, from what I understand) Jay Brooks' Brookston Beer Bulletin Jesse Friedman's Beer and Nosh (with a great across-the-table picture of Bill at work)
Written by Bryan Kolesar at Friday, February 13, 2009