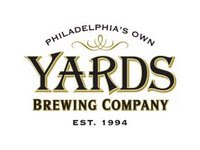 Yards Brewing is getting its brew kettle footings firmly under itself as it comes up on its first year anniversary later this year. If you can't find a Yards beer or employee during this year's PBW, you're doing something way, way wrong. Click here for a 2009 updated Profile of Yards.

An addition to the profiles this year will be an interview with a key "player" at each establishment. Only problem is, I'm still trying to determine exactly who it was at Yards that sent these responses to me. Kehoe, Mashington, or some combination thereof? The words are put together too well for it to be a random word generator.
The Brew Lounge: During last year's PBW, you guys were just getting your legs under you. Has the last year met expectations for the first year of operations? What level of capacity are you guys at by now?
Tom Kehoe, maybe: We are just now hitting the 6 month mark for full production since the move and we couldn't be happier. We are about to re-open some of our old markets (NJ, Pitt, etc.) which is a great thing for some of our neighboring areas. We have increased our capacity from our previous facility and we have a lot more room to grow in our new facility.

TBL: What's been the biggest surprise and, if any, disappointments?
Yards: The Phillies winning the World Series and the Eagles losing to the Cardinals? We haven’t had too many surprises since construction. There are always unforeseen hiccups in production, but those are anticipated surprises (check Websters for that!). No disappointments that I can think of, unless you count when Mashington cut his hair into a mullet.

TBL: Have you been getting mostly positive feedback? (i.e. seeing Yards again, cask ESA, etc.)
Mashington, huh?: The feedback has been overwhelmingly positive. We have had countless compliments on the improvements in the beer, especially the ESA. Our brewing staff has done a fantastic job and I’m really happy to see the firkins gaining popularity around town.

TBL: The industry is full of characters. Name some of your favorite characters you encounter around town...owners, bartenders, reps, brewers, etc.
Yards: Well, Fergie is always quite the character. His quick wit and humor are always appreciated. Wendy from Dogfish has an obsession with the quesadillas at the Bishops Collar which manifests itself rather comically. Tom Buonano from Muller might be the epitome of the word character. Just look at our brewery, that place is full of interesting characters. We’ve got a diverse crew who all share the same passion. The individuality of all the personas in this industry is what makes the craft beer segment so fun.

TBL: How about back in the brew house? What gets you guys through the day? Who's keeping it loose and who needs to loosen up? Do you brew to music and who gets to choose the genre?
The Night Watchman: Our guys love what they do and that is what keeps them motivated. Everyone who works at Yards has the same dedication and commitment. They all realize that everyone is responsible for the finished product and they all take it very seriously. Otis keeps it looser than anyone, that’s why we bought him suspenders. Sometimes I have to remind Andrew to loosen up a bit, but his love for death metal and German beers keeps him focused. We don’t brew to music, but we do make boxes and keg with a radio in the background. The guys choose their own music, which is funny. Half of our staff listens to jam bands (Grateful Dead, Phish, moe, etc) and the other half listens to metal. I listen to the 80’s. The running joke is that creates the balance. I know Tim used to wait until some of the metal guys were up on the scissor lift painting and then switch it to the Grateful Dead.

TBL: Has the yeast bank project begun yet? What are your expectations in that regard and who will be in charge?
Yards: It hasn't started yet, but it will sometime this year. Frank will be handling that and our entire lab related concerns.

TBL: The Smoke 'Em event looks great as, of course, does the Real Ale celebration. Is there anything in particular you'd like to share regarding these events? And, is there anything else around town that you're especially looking forward to during this year's Philly Beer Week?
Kehoe, probably: Smoke ‘Em is going to be a blast. I was a little apprehensive when Mashington came up with the idea, but it’s turning out to be a great event. We have something like 22 smoked beers! The Real Ale is going to be even better this year. We have nothing but impressive casks lined up and we’re limiting ticket sales again. I’m thrilled about it. With respect to all the other events, where do I begin? City Tavern is doing a great dinner feature every night. I’m not gonna lie to you Bryan; I can’t wait for the wrestling match with Jim Kirk. We have some of the IPA’s dressing up like Geishas and I’ve been in training for two months. He’s gonna get pained! We’re also doing a beer dinner at the Four Seasons that I think is going to be incredible.

TBL: Will there be any Mini-Mash t-shirts this year? Or are we on to a new theme?
Yards: God, I hope there are no more Mini-Mash shirts! One is more than enough! Mike Fava, Casey Hughes, and Mashington have been working on a shirt. Fava has a local artist doing some cool sketches and the shirt is going to look awesome. That is going to be one heck of a night; hopefully I can catch up with those guys at McGillin's.

Just in case you think life is not worth to be taken too seriously, please come to our brand-new blog and share a beer: