For the Part 1 beginning of this San Francisco Beer Week story, click back here. Monday, A Quieter Day Just because I didn't run on Monday, doesn't mean I didn't get my exercise time in. There was a mid-afternoon "neighborhood walk" in the Haight beginning at Magnolia, so I figured that there was probably no better way to spend a Monday afternoon in San Francisco. Plus, afterall, it was Magnolia and I think if you've been reading here long enough, you know how I feel about Magnolia. 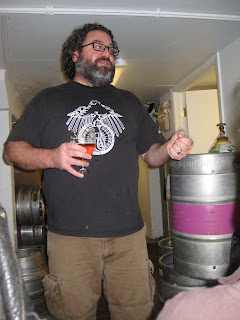 (Dave McLean in Magnolia's brewhouse)
Dave McLean, Magnolia's proprietor, was in charge of the walk and he kicked things off with a brewery tour of his own. I've tippled many a cask at Magnolia in the past, but have never wandered downstairs into what may be one of the tightest and most cramped breweries I've ever seen. Though, square foot for square foot, you've got to figure they're making the most out of their investment. 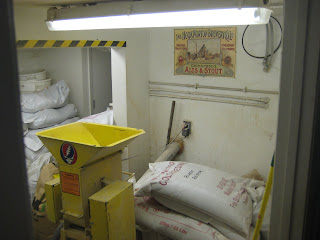 (It's obvious what music the Grain Mill does its work to)
Signs of the Grateful Dead are, of course, everywhere in the Haight/Ashbury District...even in the brewery. The Dead is a huge influence on McLean and he described some of this during our walk down Haight Street. He pointed out along the way a former residence of the Dead on Ashbury Street. Along the way, he also spoke of the struggle between those (including himself) who are trying to, while respecting the past, push the neighborhood into the future and others who refuse to step outside of it. Instead of relying on tired images and stereotypes of the neighborhood, McLean and other residents and businesspeople are trying to create a new neighborhood of self-reliance to ensure the uniqueness of itself well into the future. 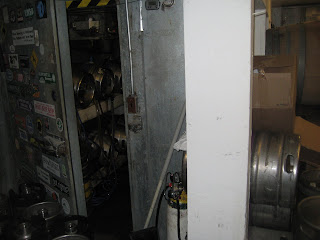 (Just a tiny peak inside of where the famed Magnolia casks are housed)
So, the afternoon walk didn't really amount to much more than a brewery tour of Magnolia, a several block walk down the street, and conversation with a couple of complimentary brews at McLean's sibling establishment, Alembic. And, duh, no one complained. This time, I smartly chose to begin my session with the recreated New Albion Pale Ale, before biasing my palate toward other beers of various strengths and flavors. Now I could render my verdict. The New Albion Pale Ale is, in my book, an easy-drinking session type of beer that has a mildly noticeable hop profile. I have more notes on the recipe and the ABV if you're interested, drop an e-mail to me and I'll be glad to send it along to you. To me, it was somewhat reminiscent of a lightly hopped German Pilsener, which could be attributable to German malts that were used. 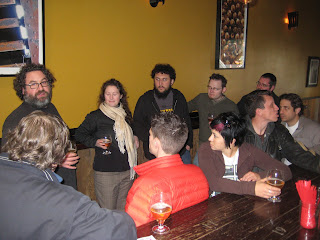 (Dave McLean regales the afternoon walkers with stories of The Haight, The Dead, The New Albion, and other stories to pass the time with good beer)
Alembic carries a mixed bag of both Magnolia brews and other beers from both near and far. Since I wasn't sure that I'd be making back to Magnolia again, I opted for The Other One and then a Cole Porter once we meandered back to Magnolia. When in Haight... When near Golden Gate Park and Haight/Ashbury, if you don't make a little time for Dave Keene's legendary Toronado bar in the Lower Haight district, well then you must have a time management or a prioritization issue. By this point on Monday, I was making a habit of running into Chaz from Alaska. After the Walk with McLean, Chaz and I headed down to Toronado (this is a short walk downhill, much more pleasing than the walk in the opposite direction). Rob Tod was doing a Meet the Brewer type of session and this helped me make up for missing him over at The Trappist on Saturday. His arm was still hung in a sling after an unfortunate keg accident, so I didn't twist it too hard to share a beer and light conversation with him. 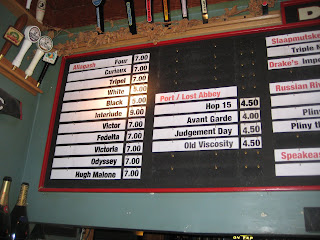 (I haven't seen an Allagash lineup like this on the West Coast. Mighty impressive.)
I was planning to have dinner with Patty back in the East Bay, so it was just enough time to give the Fedelta a try, take in some chat time with Tod and Keene, and raise a toast led by Keene to Bill Brand. During the remainder of SF Beer Week and up until his death on 2/21, nightly toasts to Brand became a habit worth making. 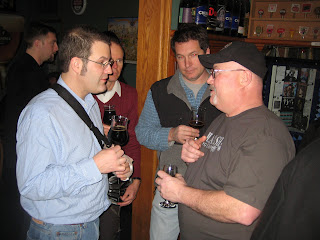 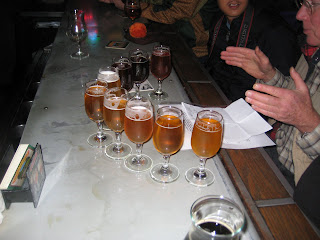 (One man's attempt to contrast and compare...and still stand at the end of the night)
Then, I was off, only a half hour or so behind schedule to catch the train and join Patty for a Spanish/Mexican dinner at Maria Maria in Walnut Creek. Not much to report on beer-wise at Maria Maria, but a very good dinner (and music) nonetheless. From what I understand, the Dogfish Head dinner at 21st Amendment was underway and everyone was bringing it just short of Biggie/Tupac style. But, seats were snatched up and distributed amongst a very select group long before I ever decided to head to the Bay Area for SFBW. Guess they didn't hear that I was coming to town ;-) An industry private party that I was, however, invited to was taking place at Alembic later in the evening, but based on my whole 'train and where I laid my head that night' scenario, joining the party people at Alembic just wasn't in the cards for me. From what I heard later in the week, they did just fine without me there too. A Day to Ourselves 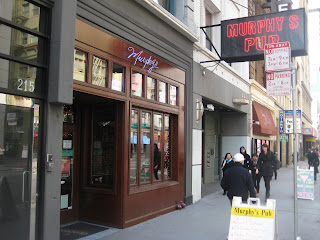 (Murphy's Pub in the Financial District on Kearney Street)
Tuesday had a Barrel-aged festival thing going on at Triple Rock and Jupiter again in Berkeley, with a format much like the Sour Ale Festival on Sunday. There was another neighborhood walk based around Beach Chalet and the Golden Gate Park. Patty was able to get away and she joined me on our own walking tour that began in the Financial District. We purposely did not do any official events on Tuesday, but did manage to make a few stops for beers and food at establishments that participated in Beer Week. It was good to get to see them during some of their down time. 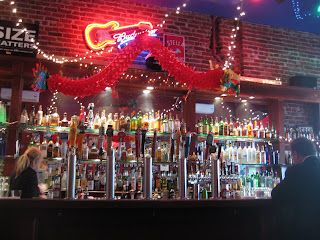 (A full complement of good beers at Murphy's watering hole)
We got off the train at Montgomery Street and wandered a few blocks over to Murphy's Pub. I'd never heard of Murphy's before, but sticking with one of my philosophies for how to approach these Beer Weeks, I wanted to search out places new to me. They were running a daily special focused on different breweries each night at the Pub...like Anchor and He'brew, for example. When we showed up for lunch, they were still pouring all of the Anchor drafts from the previous night so it seemed prudent to start with a Liberty Ale. But many taps are flowing at Murphy's, so any night after work in the Financial District would seem a good time to stop and enjoy something from Deschutes, Alaskan, Stone, or Avery. There's a pool room downstairs as well to keep the clientele entertained. 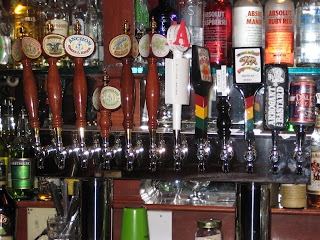 (The best lineup of Anchor outside of Anchor?)
San Francisco's Beer? They may carry the name, but I'll bet you'd name 5 other beers as being "San Francisco's Beer" before SF Brewing. I wonder even how many know that SFBC exists? Nonetheless, they live on Columbus Blvd. near the entrance to the North Beach neighborhood in a one hundred year old restored saloon building. They make a varying range of beer styles, some definitely better than others. When we stopped in mid-afternoon, we were attended to by a lovely bartender who was proud to sample her just-cut demo disk of jazz music (if I'd made a note of her name and band, I'd be more than happy to plug it right here). That, plus a bock, an anniversary ale, and a Holiday Cheer, made for a nice interlude on our way to Rogue Public Ale House. 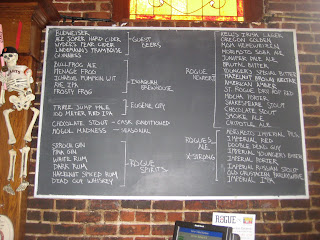 (Enough beer for all of Rogue Nation at their Public Ale House)
Just a few more blocks up Columbus, past clubs of varying repute and Italian restaurants, we ducked into Rogue's Public Ale House. I've been there a few times before, but this was the first time with Patty. Also the first time for getting a "membership card" into Rogue Nation. While I believe my palate has moved on from the Hazelnut Brown Nectar of years past, I was particularly struck by the seasonal Mogul Madness for the perfect balance of "seasonal subtlety." (The famed Coit Tower is only blocks away from La Trappe and Rogue, with a little speed bump in between) 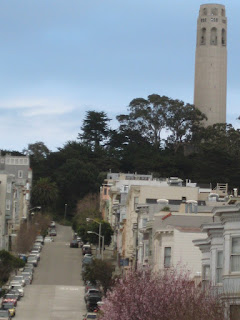 (La Trappe was closed, but it's high on the list for the next visit to the North Beach neighborhood)
Cheryl, a longtime employee and formerly from Oregon, chatted us up at the bar and gave us recommendations for our next stops. Unfortunately, La Trappe didn't open until 6pm and would have been too tight of a jam based on our train back out to the East Bay. So, we took her next recommendation and stopped in instead at the barely two months old Church Key, a couple of blocks closer to Coit Tower, on Grant Avenue. 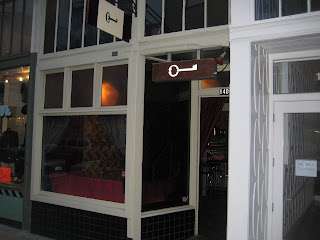 (Church Key on Grant Avenue, San Francisco)
Great find! Though I've heard varying degrees of opinion with regard to the nighttime crowd, we found Church Key the perfect place to put back a couple glasses of Unibroue (Maudite and La Fin du Monde) before heading back to the train. The owner and a new hire bartender were there to chat with us about Beer Week and their plans for the new bar. 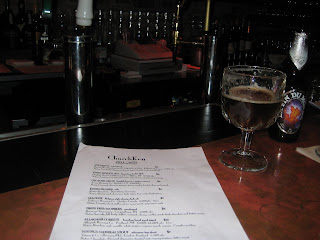 (Church Key's beer list)
It was then a quick cab ride back to BART's Embarcadero station where we caught the train to our last dinner in the East Bay. Some backyard grilling of steaks, beer, and wine to unwind with the family before switching to our last night in the City. In the last installment of this three parter, I'll wrap things up with highlights from the Cask Ale Festival at Thirsty Bear and a few more notes from around town.
Written by Bryan Kolesar at Friday, February 27, 2009

Hey I figured maybe you'd be interested in checking out breweriana week on my site. We're featuring a diverse group of collectors of beer stuff. Check it out: http://www.collectorsquest.com/featured-week/Breweriana.html