I'm going to keep this one short, because I'm in deep with the Ebenezer's crew and Sean Paxton for still not sharing all the goodness that was my New England journey and Ebenezer's Belgian Beer Feast/Festival. This Monk's review will now be the second food/beer event that I've covered since returning from Maine. I promise that one day very soon you'll get to hear all about it. Just think, all of the internet hubbub will have died down by then and you'll be all refreshed and ready to hear about it all over again! In case you lost track, after the tragedy above Monk's Cafe (which, emphasis added, had nothing to do with Monk's itself) over a week ago, Monk's was reopened this past weekend but didn't want to impact its customer base yet another day. So, the scheduled dinner with Scott Vaccaro of Captain Lawrence in West Chester county New York was moved to its sister restaurant, The Belgian Café. 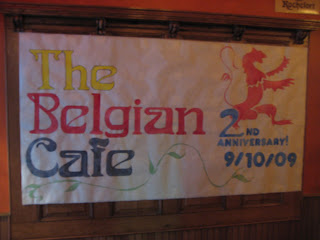 Scott's a great speaker who brought a lot of energy, passion, and expertise to the beer dinner. After being introduced by Fergie Carey (proprietor) and George Hummel (emcee...but, had never had a Captain Lawrence?!), Scott jumped into his background in brewing and the history of the brewery. Having started homebrewing at 17, making his way through UC Davis brewing school, and making a pitstop at Sierra Nevada, Scott opened Captain Lawrence on a shoestring budget in 2005. 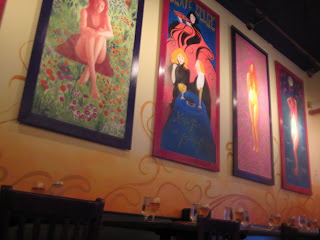 Fast forward a few years and Scott and his team are making some of the country's most interesting and celebrated beers...beers that often involve less-than-ordinary ingredients, collaborations with other brewers, barrel-aging, and blending. It didn't take long for his brewery to be recognized for its award-winning brews at the Great American Beer Festival in both 2007 and 2008. 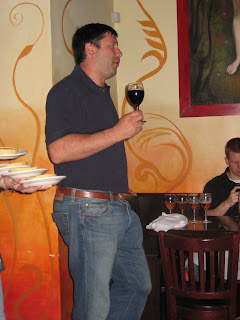 Like I said, I'm going to keep this (relatively) brief. Suffice to say that this was an all-star dinner of brewers, writers, beer geeks, and...well, who else would there be? I've sprinkled a few pictures below, and I'm sure you'll recognize some of the rock stars. Without further ado, here's the menu with some shorthand notes from yours truly. Enjoy... 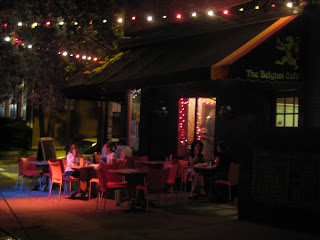 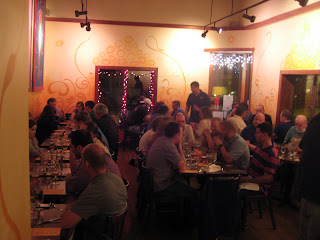 First Course Grilled Watermelon; basted w/Cuvee de Castleton, thai basil, orange zest & ginger ~ paired with Cuvee de Castleton; made with muscat grapes & brett. aged in oak Notes: Batch #3 of the Castleton; watermelon done grilled didn't tickle me much in any way, but the beer was perfect and actually went even better with the dessert (read on) 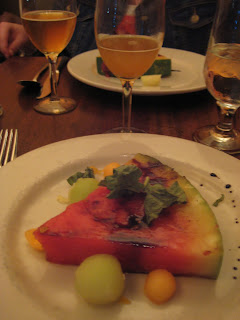 Second Course Lancaster County Frittata; with local eggs, corn, tomatoes, & zucchini ~ paired with NY3; a 6% dry hopped amber farmhouse collaboration ale (between Southampton, Ithaca, and Captain Lawrence) Notes: I love me some breakfast for dinner, so the frittata worked very well for me; this beer, brewed for NY Beer Week, sourced with New York State hops and honey, dry-hopped with Willamette, and finished a "Belgian Yeast that Phil Markowski found" got better as it warmed, losing its initial ash-y taste and letting the honey come through a bit later on 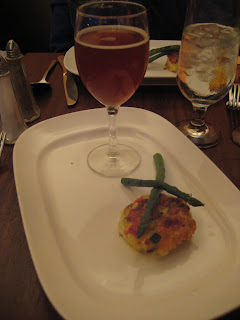 Third Course Roasted Quail; stuffed with wild rice, walnuts, & local peaches; lacquered with xtra gold and pureed peaches ~ paired with Xtra Gold; a 10% Triple that has tons of hops Notes: "tons of hops"? sure thing...as in Amarillo. Even though I'm not always a fan of picking apart a small bird, sifting through its bones, this was a tasty dish. Another beer that might actually had been better paired with the dessert. Fourth Course Cioppino; local tomatoes, clams, mussels, shrimp, & cod ~ paired with Captain's Reserve IPA; an imperial IPA Notes: Though this IPA might have gone better with the quail than did the Triple, this here was probably my favorite pairing of the evening. The pineapple sweetness and bursting hops were nicely balanced, barely disguising this as an "imperial" IPA. Chinook, Columbus, Cascade, and Amarillo if I have my notes correct. 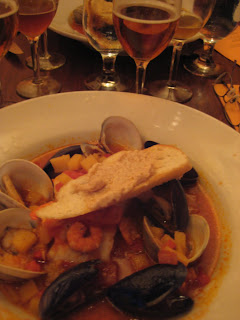 Fifth Course Pear Tart; w/ bleu cheese crust ~ paired with Smoke from the Oak; smoked porter aged in apple brandy barrels Notes: 125 cases were made and its official release will be at the brewery this coming Saturday, 9/12. Nice beer, went pretty well with the dessert, the crust bursting with bleu cheese. In my opinion (is this where I put FWIW? or IMO?), the Cuvee de Castleton and its fruit flavors and moderately funky edge went even better with the fruit tart and its funky bleu cheese crust. 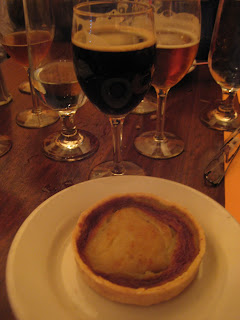 Oh, and since I really didn't comment above about The Belgian Café's ability to pull off this dinner, allow me to do so right about here and now. This dinner cruised along nicely with an ending time just shy of two hours after its beginning. The staff worked the square room effortlessly and efficiently. Perhaps the only drawback was the at-times overbearing din of the high decibel crowd. But, at the same time, have you ever seen everyone who attended the same Monk's Beer Dinner as you? With the dining crowd stretched out from the "exclusive" front window seating to the sometimes-participating back room at Monk's, and the tables in between, you just never will see everyone attending the dinner all at once. That was no problem at The Belgian Café. Come to think of it, I wouldn't mind more dinners moved up the Art Museum neighborhood to mix things up from time to time at Monk's. 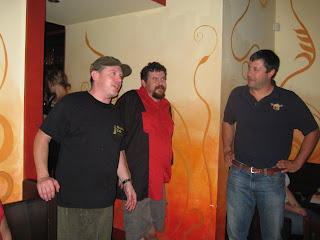 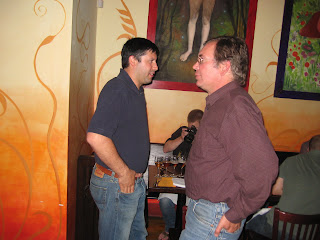 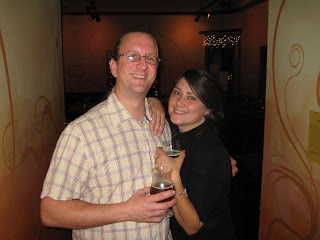 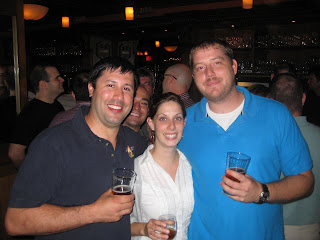 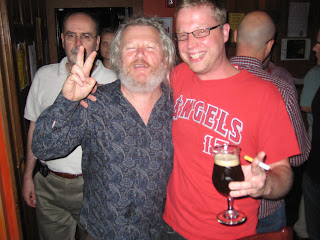 Sounds like a great evening. Anyone know where I can get bottles of Capt. Lawrence?

sounds like some NY3, Xtra Gold, and Imperial IPA remain from the dinner at The Belgian Cafe as of this afternoon. They, presumably, are "giving it away" ;-)