Beers from the past 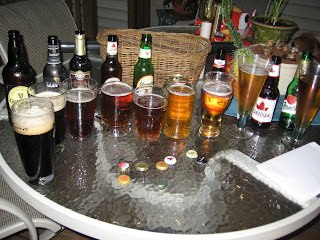 This story started originally over at The Washington Times where I write this little beer column for The Communities section called After Hours. Instead of loading up on too much beer description and photos over there, I decided to put together more of the details here in this space, complete with (not quite) stunning photos of each beer, and link the two articles together. So, do the old click here to see the back story to this story and then come on back to read about all the fun I had with this concept. It would probably be even more revealing to have done this little experiment in a more true blind tasting fashion. But, none the less, frankly, I think it's something that many of us should do from time-to-time. 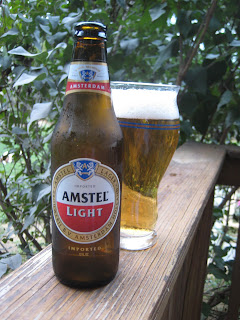 Amstel Light- Admittedly, I originally drank this many years ago for two reasons: "it's an import" and "it's low calorie". Two of the less-proud reasons that I could have for drinking a beer. How does it drink today? My experience with mass-produced light beers is as weak as it's ever been, but I'd have to say that this Amstel Light was the thinnest, most water-like, beer on the table. It had an unfortunate slight metallic taste to it. At 95 calories, I suppose you might say you get what you pay for. Though, remember, image should never be one of those things that you pay for. 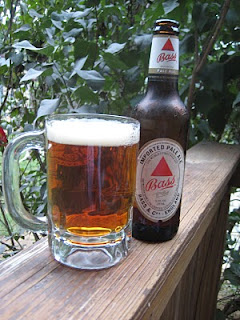 Bass- My father-in-law always had this available when my wife and I would pay him a visit. It was one of his favorites, and that bode well for me since it was one of the first English ales that I really enjoyed. I'm glad to see that, though I rarely am heard ordering this beer, it still drinks much like I recall. Basically, this beer still was a pleasant drinking beer, if not a tad too sweet for my liking. Hm, English ales, that reminds me I'd like to track down John Courage and see what I would think of that here almost twenty years later. 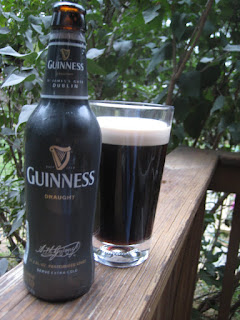 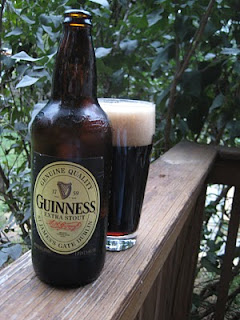 Guinness- The "meal in a glass" thing? At 125 calories, the Guinness Draught is not nearly as filling as many believe it to be. With the widget in the bottle, it certainly does deliver the creamy softness when served on nitrogen draft. The Extra Stout version does weigh in a bit beefier at 176 calories. In both cases, this has always been, and continues to be, a very drinkable roasty stout. Though, it was interesting to note the smokey characteristic in the Draught version and a bit of an nicer balance between the malt and hops in the Extra Stout big-boy version. 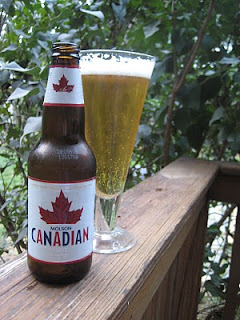 Molson Canadian- Here is another qualifier in my early days due to its import status. Put it up there, I suppose, with the Mooseheads and Becks of the world that I used to think were important to have in my fridge. Come to think of it, it was more likely the Molson Golden, but we're probably splitting hairs at this point. Tasting this nowadays, I can't imagine why I ever liked this beer. It had the ever-so-tiniest hint of pleasing malt, but not much else. 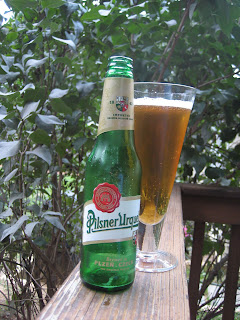 Pilsner Urquell- This Czech beer hearkens back to my father's heritage and a time in my life, as I mentioned with Amstel Light, when I ascribed a bit more quality to (untasted) beers that came from anywhere but the States. This Pilsener style beer goes down easily, but many American-crafted Pilsners are tasting much better to me these days. Plus, they're made much closer to home; always a plus for beer. A true Pilsener, I should note can only originate from the town of Pilsen in the Czech Republic. All others are referred to as Pilsner-style; notice the subtle spelling difference.\ This beer ranked as one of my favorites on the table during this evening sampling. It smelled and tasted like I just walked into a brewpub and the brewers were beginning their brew day. How awesome is that, right? And, on the hops side of the equation, it definitely had a bigger hop presence than I recall in my early days of drinking this beer. But, then again, it's been so long since I've ordered and drank this beer that I probably don't accurately recall much about this beer. This has definitely moved up my list of beers to try again soon. Samuel Smith Nut Brown Ale- My wife and I went through a period where we loved this beer and always picked up at least a six-pack of it when out beer and wine shopping. I can't recall whether the clear bottles ever resulted in a skunked Nut Brown Ale from this English brewery. Between the clear bottle and the lengthy trip from brewery to U.S. retail shelves, it would not be unexpected. Fortunately, the bottle that I sampled for this column came in a brown bottle. How did it stack up? It's still as roasty and pleasant of a brown ale as I recall and would gladly have another bottle of it. 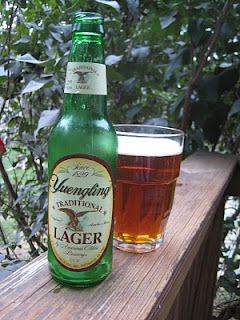 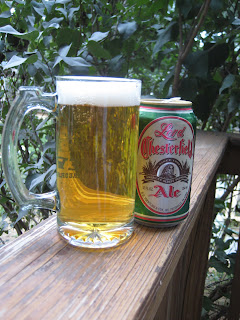 Yuengling Lager and Lord Chesterfield Ale - Ah, here in Pennsylvania we've been the envy of the beer drinking world ever since Yuengling took on an almost cult-like status fifteen, or so, years ago. Was it the unique name? I'm not quite sure, but I never took much of a liking to the flagship beer, simply called Lager. And that opinion still holds today. All I wrote on my tasting notes was simply "Nothing". As in, I got absolutely nothing from this beer. I'll admit I was a bit surprised by this reaction as I certainly did not expect the beer to be so vapid. Lord Chesterfield, however, was a totally different story. This beer and the Black 'n' Tan from Yuengling were two of my early favorites from this Pottsville-based brewery. This particular tasting I did was from the can and it made for a real pleasantly balanced beer with just a little extra kick of hops to keep things interesting.
Written by Bryan Kolesar at Monday, September 13, 2010