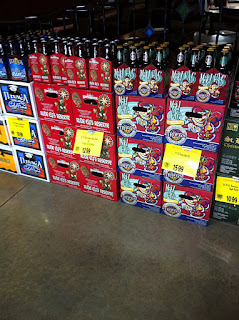 You may now resume your holiday imbibing with the elves in peace.

Actually, I'd wondered recently how many even knew of the legal storm when it began brewing earlier this year. I'd mentioned a couple times in the past week or so to various people in the biz who basically shrugged and said something like "huh, dunno...kind of forgot all about that. Weird, though."

So here we are. The Fegley's crew continues their thing in the Lehigh Valley with a successfully growing empire of locations, complete with coffee and burritos to round out the brewing and restaurant operations. Tröegs has its shiny new operation in Hershey as the envy of many in the industry.

Mad Elf. Rude Elf. I'm happy with them both. And comparing isn't really fair given that they're quite different beers.

There above is a picture of them living side-by-side at Wegmans when they both first made their annual reappearance back in October. I'd wondered at the time if the retail beer staff at Wegmans stuck them side-by-side with any intended message.

Tröegs is a bit more expensive. Given the recipe, you might imagine that. 33% more? Hard to say. 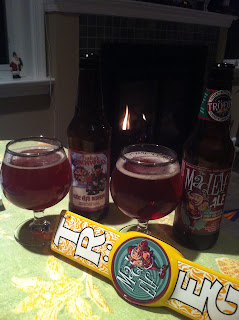 Here they are at home with me. I like 'em both. But, they're different. Rude Elf is more cinnamon and more allspice, but yet a quite drinkable "Christmas beer", particularly at 10.5% ABV.

Mad Elf is more honey and muted sweet cherries. Also, quite drinkable and, yet, 11% ABV. I prefer the latter but would not think of turning away the Rude Elf. Like I said, no reason to since they are so different.

While I'd like to be hopeful that these kind of legal actions do not become the norm, similar proceedings between other breweries in recent years suggest that may be wishful thinking.

Neither of the breweries are saying anything. Anything. I tried. I tried my "nice cop" approach and got nothing from either. It must have been part of the settlement, whatever that may have been. The extent of what I got was, and I quote, "We have nothing to add." (Tröegs) and "We are very happy that it has been resolved and have no further comment on that matter. We are proud that Rude Elf's Reserve always seems to prove a winner such as its 2002 World Beer Championship win and 2009 GABF win. This years batch is destined for greatness as well." (Fegley's)

Here's the official press release copy from Fegley's.
Fegley's Brew Works is pleased to report the litigation with fellow Pennsylvania Brewer, Tröegs Brewing, has been resolved and Fegley's Brew Works will continue to sell Rude Elf's Reserve. When asked to comment on this matter Jeff Fegley responded, "We have no further comment. You may direct any questions to me via email only at jeff@thebrewworks.com" When asked if Tröegs would be attending the Allentown Brew Works Beer Festival this Saturday, December 3rd, Fegley responded, "Unfortunately no, they are tied up with their new brewery expansion."

When asked about this year's batch of Rude Elf's Reserve, Fegley noted that it is "better than ever. We added two new 30bbl fermentation tanks this year and are really happy with how the complexity of the flavor profile has come together. The 1999 recipe has only been tweaked slightly over the years as the equipment changed, and was a Medal Winner at the Great American Beer Festival in 2009." Like many craft breweries, in 2011 Fegley's Brew Works has seen a giant increase in business. "We are at full capacity projected to brew about 3,800 barrels of beer in the next 12 months at our Allentown facility alone. We are adding 3 more 30 barrel fermenters in the next few months." said Fegley.

There are only limited quantities of this year's Rude Elf's Reserve left so get them while they last! Or sample them at the annual Allentown Beer Festival this Saturday afternoon with almost 30 other breweries attending. Look for Fegley's Brew Works products at Shangy's Beer Authority, Whole Foods, Wegmans and Tanczos, or sample their fine brews at locations like PJ Whelihans (Allentown and Bethlehem), Dunderbaks (Whitehall), Porter's Pub (Easton), TGIFriday's (Quakertown), Wise Guys Beer Depot (Allentown) and a distributor near you.