Dock Street and The Four Seasons. Old Neighbors back together again. 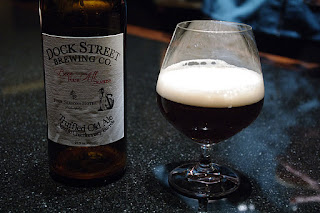 Dock Street and The Four Seasons began their relationship over 20 years ago when the brewery and restaurant opened just around the corner on 18th Street in the space that is currently occupied by Public House. Much looks very familiar at the old brewpub, but Dock Street has certainly taken its spirit in a different direction than its original Center City location suggested.

Dock Street has been at 50th and Baltimore in West Philly for the past five years after Rosemarie Certo took back the reins of her restaurant and brewhouse. After a few noteworthy brewers, Scott Morrison has reemerged as head brewer from the brew kettle's shadows. It seems that barely a few months pass without a beer forum thread asking a question along the lines of "What ever happened to The Dude?" or a beer writer making passing reference to potential plans of his to open his own brewery here or there. 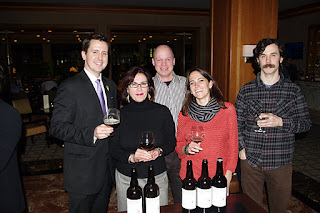 Morrison's been manning the mash paddle at Dock Street since Ben Potts left a few months ago. At one point, Morrison did have designs on opening his own brewery and had the whole brewhouse in storage awaiting that day. Though, for the foreseeable future, he is back in the fold at Dock Street, having recently sold the brewing equipment to an outfit in Alberta.

To bring this all back to 2012, Dock Street has partnered with The Four Seasons on a planned series of beers paired with the seasons of the year. The first one up is available exclusively at the hotel's Swann Lounge and Fountain Restaurant beginning Monday, January 30.

The beer is called Truffled Old Ale and is much like the name suggests. All the recipe details are up on Dock Street's website, including words like "malty", "chardonnay barrel", "winter truffles", "vodka" that are sure to peak your palate's interest.

I had a chance to preview this beer at the hotel's Swann Lounge last night. It's still rather remarkable to be drinking quality craft beer in a setting as warmly rich and comfortable as The Four Seasons. I'd first done this with Fritz Maytag three years ago during Philly Beer Week. At the time, I'll admit that I was nothing more than skeptical of The Four Season's intention of getting involved with Philly Beer Week. Really? It had to be nothing more than a marketing ploy, right? Would they really represent craft beer throughout the year? Then, they really stepped up their involvement during last year's PBW with a daily focus on various local craft breweries. Now this. Color me convinced. 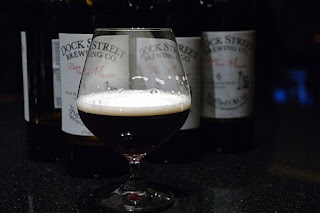 (A glass of beer. Certainly more interesting to drink than to look at.)

So, what's the story with the beer, you ask? Any fears that this is just a novelty beer should quickly subside after the first taste. The truffle essence is rather subdued and plays just a hinting role in the flavor of the beer, instead letting the hallmark English maltiness and slight bitterness remind you that this is a beer. A beer, in fact, of which you can have more than one. The truffle essence comes out so slightly as the beer warms, as does the chardonnay characteristics.

Only on January 30, the 750ml bottle will be available at The Four Seasons for $16. There are somewhere around 15 cases, give or take (depending upon, of course, how much we drank last night), available for sale.

Expect more from the collaborative series beginning with a spring release -- style still yet to be determined by Morrison and Chef. 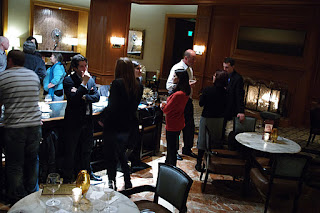