A weekend that epitomizes Philadelphia beer and its landscape

If you weren't looking carefully enough, you may have thought that the big event on the Philly Beer Calendar in the month of January was already behind us at The Grey Lodge's Friday the Firkinteenth extravaganza a couple of weeks ago.

Or you might have been lulled into looking forward to February after the weekend of Tripels (Johnny Brenda's), Ommegang Brunch (Grey Lodge), Buggy Beers (Iron Hill, NJ), and even an event called Big Ass Beer Fest.

For the past several years or so, as many of you know, the last weekend of January is reserved for Iron Hill's Belgium Comes to West Chester madness. The last Saturday has also seen an annual meetup called Stone Soup of BeerAdvocate.com members. A few hearty souls from this meetup typically find their way in to West Chester late in the afternoon in search of leftovers from the Iron Hill event that draws nearly two dozen guest brewers and close to 30 incredibly funky, sour, tart, or some combination thereof, Belgian-influenced beers.

Complicating matters this year -- or adding to your gustatory delight, depending upon your appetite and tolerance -- was an event at TJ's in Paoli with an all-star line up of beers from Shelton Brothers Importers. Think Mikkeller, Cantillon, Struise, Jandrain, Dieu du Ciel, and To Øl to name just a few of the breweries represented amongst the standout, highly-sought-after beers.

And, then...you may have caught wind of the annual mayhem that is the HopSlam release from Michigan's Bell Brewery. After just hitting the street over the past couple of weeks in Pennsylvania, bars have been putting their allotment on tap, some on short-notice (Twitter- and word of mouth-driven basis). This past Saturday, Teresa's Next Door had scheduled it to be poured along side Founder's Double Trouble and Russian River's Blind Pig and Pliny The Elder.

Virtually impossible to hit them all, particularly with any acceptable degree of personal social interaction while at these stops, my trip took me from Iron Hill for a full-on palate assault to TJ's for dinner. Along the way, I learned that The Drafting Room was doing a surprise tapping (well, a few hours notice, at least) of their own HopSlam. It was more or less along my straight line home to check in on the dogs first before TJ's -- or, at least, moreso than heading to Teresa's Next Door. So a HopSlam was in order as was -- wait for it -- a platter of Portuguese Sliders, my go-to "snack" at The Drafting Room, if you haven't caught on to that yet.

Back to West Chester. BCtWC was everything that it's always been. I've talked about it back in 2007, in 2008, in 2009, in 2010 (the epic year, for at least one reason), and again last year. Those are links to my reviews behind each of those years that I just listed, in case you're new around these parts :)

It's a bunch of interestingly creative beers, some with flavors that you may have rarely, if ever, encountered in beer before.

It's a process of serving over two dozen beers that the Iron Hill staff continues to get more efficient with every year.

It's a gathering of brewers from Virginia to New England and all of the Iron Hill locations that have contributed beers for the event.

It's a celebration of local brewers, regional brewers, and a nod to Belgian brewing roots that inspires creativity in the brewhouse.

It's a bit too social of event (at least for me) to really focus on critiquing the beers much past a basic "I like it" or "Not so much" or "Wow, that's an incredible flavor or aroma of XX or YY". Some folks hunker down at a table to do their ticking and note-taking. I may have eventually tasted around half, or so, of the 29 that were available on draft.

Then a brief pitstop at The Drafting Room, where every bar and table seat appeared to have at least one glass of the hop juice from Michigan in front of them. Solid crowd, but not an overwhelming crush, which made it real nice. No doubt, due in part to the wide stretch that beer geeks were spread across on this fine weather Saturday.

As I said, I stopped in at home to get permission from the dogs (aka, let them outside to take care of nature's business) for few more hours and then took up refuge at TJ's for dinner and a few more tasties from the Shelton Brothers stable. I can never get enough of one of the finest coffee beers there is, Peche Mortel, from Dieu du Ciel in Montreal. Turns out HopSlam made a return appearance at TJ's as well, but I'd never say a trip to The Drafting Room was wasted.

More beers, more good times just as TJ's does without compare. And then something happened. Speaking of Michigan, that guy Dr. Joel (from New Holland) -- you know, the guy that had what seemed like countless "farewell" parties -- walked through the door. Then a guy named Hughes (Flying Fish), Woods (Allagash-Suzy and her Iron Hill beau, Lappy), Ohst (Sly Fox), and Hamel (Harpoon). Let's see, did I miss anyone? Kevin Brooks. He was repping Shelton Brothers.

Casey attempted to take the party to the next level, but the gents behind the bar were having none of that. They stopped doing shots a long time ago. 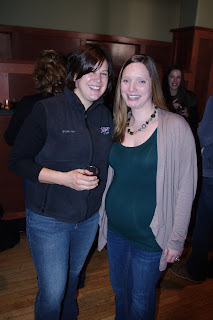 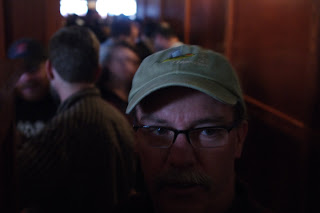 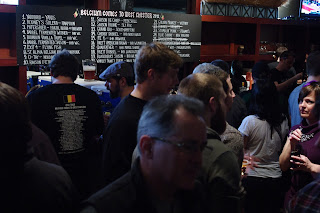 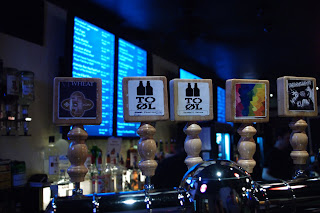 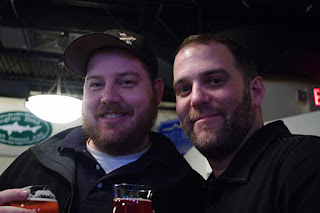 (Every once in a while, you'll catch a picture of me in these pages. Here's one with Flying Fish's Casey Hughes, left) 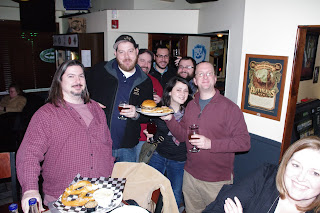 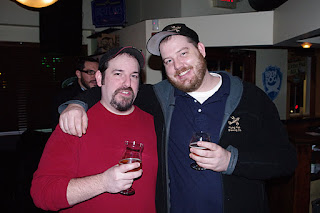 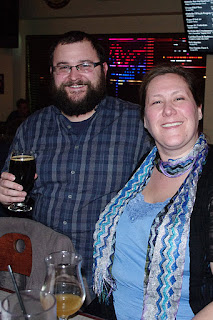 Has it really been this long since I've last featured Sam here in these pages? Can't be, but this is the first image that came to mind.
Written by Bryan Kolesar at Monday, January 30, 2012