What is the etiquette for Russian River beers not consumed?

Jason Harris said something helpful to me the other day. "Why don't you just put up a link to your columns at The Washington Times? I'd read them if there was a link on The Brew Lounge."

Hm, let's see, how difficult could this be?

Here goes. There was a dinner at The Yardley Inn last month featuring Russian River Beers. You know, the really geeky stuff that most beer enthusiasts can't get enough of.

There's a picture I didn't share in that review article. It's a picture of the table behind us where they left almost every Russian River beer on the table, barely any of them even touched. Yes, there is no trickery here. This was a picture after almost everyone else had left the room and the dinner was over by at least 20 minutes. The party-poopers were seen later in the bar with wine. Go figure.

So, remember, the deal here is that you help me out with some clicks over at TWT. Share the link too; spread it around. Show them that we love to read about beer and not just politics, pop culture/entertainment, and religion. 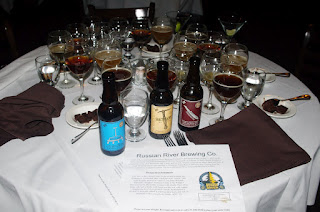