While this series of Writing the Ship could go on for a baker's dozen, I'm really trying to get this done with and in our collective pasts (unless, of course, I'm the only one reading them) in ten episodes.

So I'm combining these two — Providence and Manchester — into one. They should fit quite nicely with each other since neither one alone will make this entry into The Brew Lounge burst at the seams.

But, as I've said plenty in the past, there's nearly nowhere you can go in this fine country these days without finding some sort of a better beer scene. Whether they're importing decent beer or making it, most places you could ever imagine finding yourselves will be able to pour you something decent.

Providence. I feel I've spoken in dribs and drabs of Providence through the years. For my day job, I've been there many times in the past six years or so. Enough to determine that, when there, I rarely want to be anywhere other than Julian's. 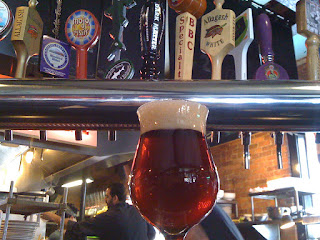 (The always stellar draft tower at Julian's in Providence, RI)
Julian's for their breakfast, lunch, dinner, live music, indoor seating, outdoor seating, cozy/friendly seating the small bar overlooking the kitchen, or sitting in the comfortably eclectic one-room restaurant. The beer list is as interesting and diverse as the food menu. 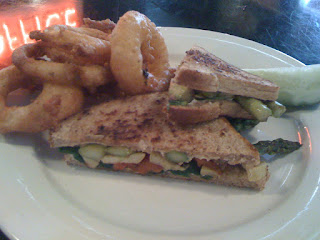 (A creatively satisfying sandwich off the specials menu at Julian's in Providence, RI)
Every time I'm there, without fail, some sort of interesting conversation takes off at the bar and a few decent beers are consumed. I've been to a handful of other spots around town, Julian's remains my favorite. 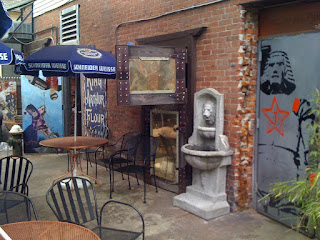 (Out back of Julian's in Providence, RI) 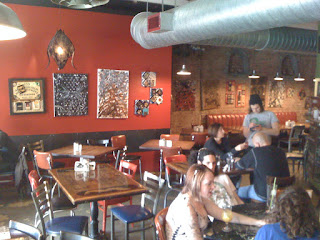 (The dining room at Julian's in Providence, RI)
Those others? Well, there's been the John Harvard's at Union Station (nice location and atmosphere in a former train station with decent enough beers). There's the "local-themed" Local 121 which has a nice lineup of beers on tap to keep things interesting amongst an even more interestingly-conceived food menu of fresh, seasonal, and local.

Turns out, I later learned that there's an ownership relationship between the Trinity Brewing Company just around the corner and Local 121. Trinity has been around for a while and delivers some decent beer in what comes across as a younger, more "hip" environment. Their Irish Stout and IPA have treated me consistently well in the past. 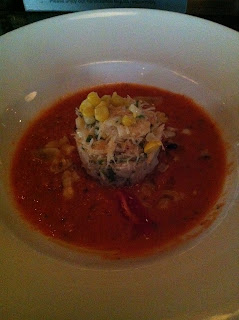 (An excellent seasonal corn and crab soup at Local 121 in Providence, RI)
For retail beer, there are two on opposite sides of town that have served me well through the years. The first, Nikki's Liquors, is on the edge of North Providence (that's a separate city, btw, in case you need to know this sort of thing). Tucked away in an unassuming strip mall, Nikki's is stocked with a good representation of regional beers as well as an impressive inventory of beers from around the world.

Closer to the airport in the area of Cranston is Wines & More of Rhode Island. More alcohol supermarket-style in layout, they have row and cooler after row of beers from around the region and world at competitive prices. Conveniently located next to a Whole Foods Market, it makes for a great one-two shopping stop for beverage and food.

The one place to close out the discussion of Providence with is nearly just across the street from airport. If it came to it, walking from Track 84 to the front door of the T.F. Green airport is not impossible at just under a half-mile. But, did I use the word unassuming above? I'll use it again where here it is probably even more appropriate.

Track 84 sits, appropriately, along the railroad tracks leading from the south into Providence and up eventually to Boston. If I had a picture (oh, what the heck, here's a Google street view), I'd show you how nondescript of a small building it is.

But inside, you'll find friendly service with a local flair, a simple but sufficient and satisfying sandwich menu and free popcorn, a decidedly local crowd of no-nonsense but friendly folks, and a beer list that rivals some of the best around. There's a kick-ass jukebox as well to keep the energy flowing.

But, don't press your luck, as I did, and get ensconced in happy hour revelry and run the risk of missing your flight. I took my trust of the flight tracking app on my phone as far as I should and made my flight by the slimmest of margins. Still, I wouldn't trade those last memories of beers in Providence (or Warwick, if we're being more specific) for sitting at the gate any day. Don't believe me, check out the draft list via this link.

Up the road a piece in New Hampshire is Manchester, a town to which I'd never been until late last year. I can't tell you that there's much happening in Manchester but, then again, I can't tell you that there's not much happening there either. It was just one night passing through on the way to Boston, but that was enough to check out Strange Brew Tavern and Milly's Tavern.

Strange Brew is in the heart of downtown and while the city streets appear sleepy (though, I suppose I can give them a break, it was bitterly cold after all , the hustle was bustling inside. Every Sunday, they run a special that's hard to beat. $3 draft specials and 1/2 price appetizers. With a few White Birch beers on the draft menu at $3, my mind was made up right quickly. With a very solid draft list (with great regional representation from breweries like Smuttynose, White Birch, Shipyard, Magic Hat, Otter Creek, and Trout River and a food menu consisting of solid pub favorites like fried pickles, wings, nachos, and quesadillas and heartier dishes like meatballs, fish tacos, short ribs, jambalaya, and Shepard's Pie, this is a dependable recommendation for any thirsty beer traveler passing through the region.

Over by the campus of University of New Hampshire-Manchester along the Merrimac River, Milly's Tavern is an interesting spot. It is Manchester's only brewery so that is certainly part of the initial draw. Finding it is not an obvious slam dunk, though I'm sure the second visit would be easier than the first.

Once you find your way to a parking spot and down the few steps into Milly's, you'll find yourself in room with a stage in the front and a bar in the back. There they combine live music, some decent beer made on-premise, and a satisfying food menu of standard pub grub, salads, wraps, and sandwiches.

While the Oatmeal Stout and Red Tail were solid and enjoyable beers, after putting away the BLT sandwich, it was time to head out as Sunday night head-banging (and mediocre, to boot) music was not high on my list of wants. Still, if in Manchester, not a bad place to stop, but certainly don't bump Strange Brew for it.

That's about all I can share from Manchester, unless you count the attempted visit to The Tap in Haverhill along the Monday evening drive to Boston. CLOSED MONDAYS?! Yes, that was my exclamation (question mark and incredulity included) when arriving at a darkened downtown storefront whose beers I've had numerous times at Ommegang's summertime BCTC festival. Here I was a bit excited to consume some on site and CLOSED MONDAYS. Sheesh.

Well, that door closed, so the one that opened was up the street at Krueger Flatbread, which must be said was an excellent stop for pizza (er, pardon me, flatbreads) and a Sierra Nevada before heading off to Boston.