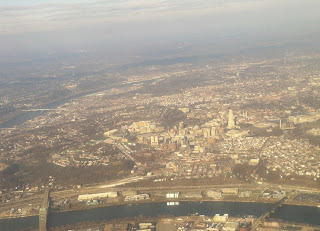 (University of Pittsburgh from the air. No kidding, right?) 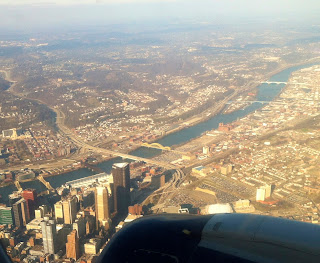 (Bridges over the Allegheny River. A keen eye for breweries may be able to pick out Penn Brewery on the North Shore.)
All you need to do is Google "brewlounge.com pittsburgh" to find that I've written quite a bit over the years about our sister city on the other side of the state from Philadelphia. I could link you over to any number of articles I wrote about my beer-y travels around the City.

I've been there for work a number of times. Flyers/Penguins, Eagles/Steelers, Phillies/Pirates weekend trips. And as you read this, I'm prepping for my third running of the Pittsburgh Marathon. Suffice to say, I've had a chance to take the pulse of the city, its beer, and the bar scene.

And, although, I'm not a typical proponent of rooting for one's enemy (e.g. would never, ever root for the Giants in the Super Bowl, the Mets in the World Series, etc.), I actually did find myself not hating the Penguins for winning the Stanley Cup the other year. But maybe I won't let our Pittsburgh friend, Brian, hear that. Though, my opinion of Sidney Crosby remains still just as negative.

But, about the beer scene, I've had plenty to say. If you do that Google search I mentioned above, you'll find a bunch of references. My records show, though it seems light, that I've tagged 19 articles with the word Pittsburgh. Here's one that, back in 2009, did a pretty good job of summarizing the beer scene around the 'burgh at the time.

And now? I was last there back in November on a simple one-nighter along the way to Chicago. So it meant time for just a well-executed plan of hitting up Fat Head's, Piper's Pub, and Smokin' Joe's.

They were all predictably excellent stops based upon my past experience and short amount of available time on this one particular evening. A few things I was struck by that are worth sharing with you. 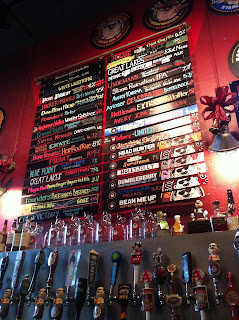 (On the South Side, Fat Head's beer menu never fails to impress.) 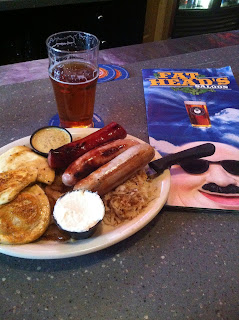 (Never any shortage of food at Fat Head's. Here's the 3 Little Pigs plate which, even listed as a "munchie" on the menu, is more than any one average person really needs. But, oh my...)
It seems that the number of Fat Head's-brewed beers on the tap list (from its production facility outside Cleveland, OH if you didn't know) increases every time I visit the pub on Carson Street. This time, it as first time run-ins with both the Sunshine Daydream and Bumble Berry that kept me impressed as always with the brewery's solid brewing record. 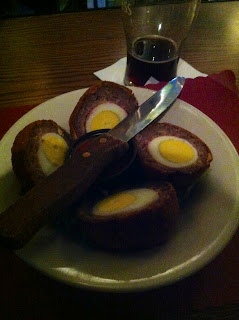 (Scotch Egg at Piper's Pub with a locally-brewed East End Snow Melt.)
Across the street at Piper's, they still make a strong case in my book as one of the friendliest pubs in town. Comfortable bar atmosphere, European soccer/football on the television, and interesting and easy conversation with both the staff and fellow customers. A must stop for pub and beer lovers...and Scotch Egg lovers. Also, a dependable source of decent cask-conditioned beer.

Then, a few more doors down Carson Street, Smokin' Joe's still a great place for beer, darts, and pool.

But, the real surprise during this trip came to me after I figured my run-ins with food and/or beer to report back to you were complete. The Pittsburgh airport, what would you expect? Bar Symon? As in the award-winning chef and culinary personality Michael Symon. 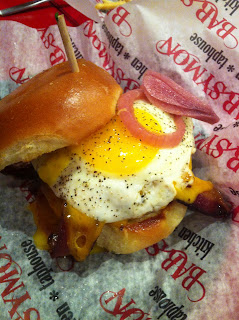 (The Lola Burger at Bar Symon at Pittsburgh International Airport)
Since I'd just days earlier conquered the Harrisburg Marathon, I felt justly deserving of the Lola Burger (with fried egg, pickled red onions, thick bacon, cheddar cheese, on a challah bun), Rosemary & Parmesan Lola Fries, a superb Fat Gary Brown Ale, and a Breakfast Stout to go. Yes, to go. Because that's the way many airports roll; you just have to ask.

(That reminds me. Have I ever shared with you what is likely the greatest compilation of airport beer information on the Web? I contribute to it as often as I can in order to help the cause.)

Decadent, it surely was. And the service was top notch, speeding the beers and the food even on our barely 30 minute window. If you're traveling through the Pittsburgh airport, you probably can't do much better for both food and beer. 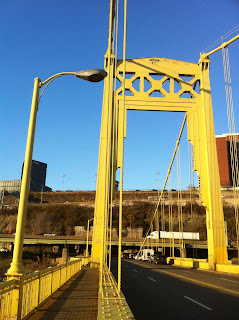 (Looking back at the Armstrong tunnel under Duquesne University from one of many, the 10th Street, steel bridges.) 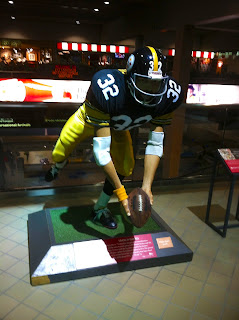 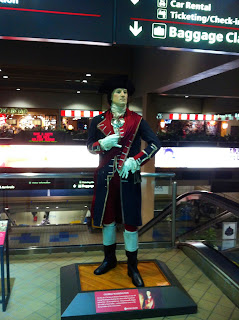