After having moved through Atlanta (I've refrained from any "marching" analogies) with Part VI, (also check back on the "Intro", Part I, Part II, Part III, Part IV, and/or Part V if you just joined this meandering party and wondered how we got here) this Brew Lounge caravan moved on to Orlando.

Yes, home of the mouse ears. But, The Brew Lounge smartly avoided all of that mess and instead, (duh?), focused on the beer side of the city. For this particular trip last October, that meant checking out Redlight Redlight, The Imperial Wine Bar and Beer Garden, and scooping up some take-home bottled beer from Knightly Spirits.

For full disclosure, I should also add that upon my late arrival I found a Miller Ale House. I hadn't realized what a large enterprise it is — and that there are a few locations in the Philadelphia region — but, I had cautiously set my expectations even before arrival. It happened to be less than a 1/2 mile walk from my hotel. Nonetheless, while it fit the bill for consuming something at that late hour, if it wasn't for the friendly bar service, the experience would have been a total loss.

Let's move on in the spirit of good taste. Work ensued for a couple of days and that meant not much, actually anything, in the world of better beer. Florida has come a long way, but they still are playing catch up. That opened up a night of mojitos at a group dinner with colleagues at the fairly decent Padrino's Cuban Bistro in the Hunter's Creek neighborhood south of Orlando.

Before the trip came to its conclusion, though, I was able to fit in two high quality beer stops. The first was within a home furnishings store called Washburn Imports. Yes, you read correctly. The Imperial Wine Bar & Beer Garden and its bar and tables is set amongst high-end home furnishings available for sale. 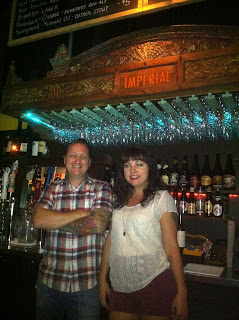 (Brett Banta and Jen Macanufo at The Imperial Wine Bar & Beer Garden in Orlando, Fla.)
Husband and wife team, Brett Banta (GM) and Jen Macanufo, were on hand this particular evening running the friendly (and popular, as I was soon to find out) spot on the northwestern edge of the city in the Ivanhoe District, conveniently easy to remember just off Lake Ivanhoe. I was the first customer of the day when they opened at 5 p.m. and the place, with an outdoor seating area as well, slowly, then quickly, filled up. The beer list (both bottle and draft) is well-considered and the small plates of available food make for a perfect pre-dinner or nightcap kind of spot. They have a separate street entrance so they are not tied to the hours of the home decor store. 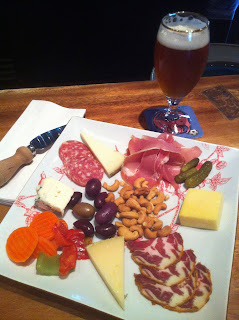 (The best bites at The Imperial Wine Bar & Beer Garden in Orlando, Fla.)
While I was there, they shared that they were nearing an announcement regarding another establishment. Since I can't find any evidence of that online, I can't say much more about that at this point. My hunch is that with their personality, beer knowledge, and industry ties, they should do just fine if and when a new venture comes along.

I asked Brett and Jen for a recommendation of that "one last stop" that a beer traveler should make if they only had an hour or so before heading out of town. A couple came up. They recommended both Tap and Grind and The Gnarly Barley, but both agreed that I should probably want to check out Redlight Redlight. Plus, a social media tip from a couple of friends back home also confirmed Redlight Redlight as my next stop. It's located on the very edge of the city northerneastern limit just down the road from their previous home in Winter Park.

I guess you could say I'm glad I made the stop. Though, the location and the atmosphere wouldn't be what hooked me. I suppose that with the rapidly expanding better beer scene and what is available in Florida, Redlight Redlight and its selection looks to be about the best around. The somewhat character-lacking bar is set inside of a former Weathermasters/Carrier air-conditioning and heating storefront within a mini-strip mall. The service is at least adequate. But when the joint is crowded with enthusiastic beer lovers and the list is dominated by great breweries from up and down the East Coast and a smattering from the West Coast and overseas, it still adds up to a good night and worth a visit if you're in the area.

Locally, Cigar City gets pretty decent representation. So for me, it was another local that I love to come across when in Florida, Saint Somewhere, and an unexpected Swamp Head Saison du Swamp. The latter blew me away and put me on a mission to bring some home with me.

Before catching a flight back home, I hoped to bring home some Swamp Head and Cigar City. The good folks back at The Imperial, apparently acting as my beer tour guides and thankfully so, recommended hitting up Knightly Spirits just west of the airport. Good deal and done. I was able to procure the Swamp Head beers that I was looking for and a couple of Cigar City beers (Bolita and Cucumber IPA, which I later learn has medaled at GABF just weeks earlier) that I'd not seen before, stash them quickly in my checked baggage, and get out of Orlando just in the nick of time. Oh and a couple of Lazy Magnolia's as well, since I don't see them all that often other than during my deep south trips.

As I've said in the past, places like Orlando, for example, are numerous around the country where the hardcore beer geek may not find everything they're looking for, but the availability of better is much greater than ever before and continues to grow and impress. 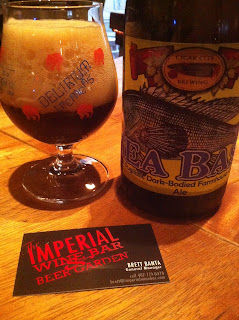 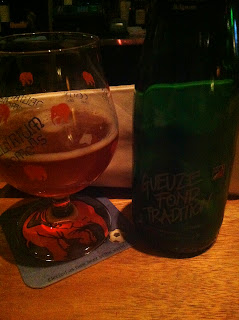 (One of the best from Belgium at The Imperial Wine Bar & Beer Garden in Orlando, Fla.)