Writing This Ship: Part 1 - A Return to BCTC at Brewery Ommegang 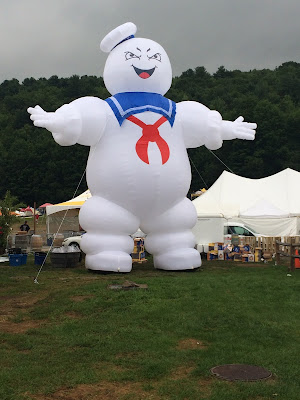 (Click for a full gallery of BCTC weekend pictures)
You may recall last week when I referred to getting my posting mojo back here in this fabulous space of The Brew Lounge, now crossing into its 12th year. Got the events calendar rolling again first after an uncharacteristic two months off.

Now I've got quite a laundry list of material to share with you. And instead of beginning with the oldest first, how about we kick things off here with a look back to last weekend and the annual Belgium Comes To Cooperstown (BCTC) at Brewery Ommegang in Cooperstown, NY.

I haven't been to Ommegang's hotly sought-after BCTC event since 2013. Needed a couple of years off to focus on writing and selling this little book project that I was working on if you recall ;-)

So of course I was looking to see how much the weekend of festivities had changed in three years. Glad to report that save for the seemingly always-increasing price (this year, $275 for the full-weekend-VIP and $110 for the Saturday tasting tent only), not much has changed...and that's a pretty darn good thing. While the price almost always goes up from year to year, the spirit has remained the same (more on that later). Full disclosure: my admission was provided by the brewery and my +1's was not.

Back in 2013, one of my oldest friends accompanied me to the over-the-top celebration of beer, food, and life in Cooperstown. This time it was my nephew's turn. Me having been to the festival, now, nine times, it's refreshingly interesting to see the festival through a first-timer's eyes and glass. But the routine was the same as always. Check in. Get credentials. Stake out a flat piece of campground. Set up. Grab a beer (or is that vice versa?) and begin to unwind and settle in. Tip #1 to newcomers: This is a must before the afternoon and evening get away from you, darkness falls, and you find your tent and bedding not set up.

As with every other year, making friends out of perfect strangers camping in close quarters was not a problem at all. By the time the tent and canopy was set up, before you knew it, our campsite was nearly one with the good people from NYC and Baltimore that we became friendly with and shared our first few beers - the first of many during the weekend.

Then it was off to the Retail Shop for some purchases. Tip #2 to newcomers: Make your retail purchases at Ommegang's shop on Friday and miss the crowds in there on Saturday. Because, if the night's weather is chilly and you need a hoody, they'll most likely be sold out by Saturday.

A few more beers, a few more friends, and a bit more walkabout and it was time to indulge in the decadent six-course meal that runs the better part of 4-5 hours by the time all is said and done and eaten and drunk. No shortage of beer (Ommegang and Duvel beers only during dinner) or food, live music, and good times to get the night into full swing.

The nighttime is much as you've probably heard - lots of campsite sitting, campsite wandering, beer sharing, bonfire watching, music listening and dancing, and plenty more. My nephew noted that it's really not a lot different than the atmosphere of overnight music camping that he's done in the past.

Saturday morning's cobweb clearing came courtesy of the quaint village of Cooperstown, less than two square miles but home to a beautiful lake, museums, the Baseball Hall of Fame, a farmers market, and more baseball-themed businesses than you could probably imagine. Some went to the lake, some went to the Hall of Fame, my nephew and I went to the farmers market (and brought back some corn-on-the-cob and Camambert cheese from a local farmer for some later campsite cooking), took in some sightseeing (his first time to Cooperstown), and watched a couple innings of baseball at Doubleday Field.

We even squeezed in two beer stops during our excursion in to town. The first was a surprise from a new-ish farm-based brewery in nearby Oneonta/Milford called Willow Creek. Enjoyed the Pale Ale and Stout enough to bring a four-pack home with me.

Then, finally after all these years of passing them by, we stopped and spent around 45 minutes in Cooperstown Brewing Company's tasting room. Learned that the parent company of Cooperstown had recently acquired their contract brewer - Davidson Brothers in Glens Falls. That little newsy bit coupled with a new brewer (since I'd last tasted beers from them), the story became more intriguing for me. Then I tasted the beers and was floored; what an improvement. The Nine Man Golden Ale makes for a tasty, low-alcohol summer refresher. The Backyard IPA is an excellent, English-leaning IPA (not enough of these around imo). And the Old Slugger leans English Pale as well. So happy to have taken the time to get to know these guys all over again.

That was the perfect segue to lunch, a few beers and ciders on the patio with the Duvel/Ommegang family, and ramping up the energy for the mid-afternoon tasting portion of the festival. The Saturday tasting has always been a significant portion of the weekend; now, however, it's bigger than ever. Two full-size tents of breweries and now focused more sharply on New York State breweries - or does it just seem that way just because there's more of them than ever? That was a good thing. Though I miss brewers and reps from breweries no longer participating in the festival, my focus was able to become more trained on the up-and-coming guys I hadn't previously seen. Which made the four-hour session go by seemingly faster than ever.

In this growth, however, a bit of what put the Belgium in Belgium Comes To Cooperstown has slipped. I drank beers ranging all across the spectrum, not just Belgian or Belgian-styled. Yes there were plenty of abbey beers, funky beers, saison, etc. But I also drank lagers, bocks, and saw way more IPAs (and other hop centric beers) than I needed to.

But that didn't make it any worse and, in fact, in some cases was nice to have a "calibration beer" to reset the palate along the way. In alphabetical order, ones that stood out to me included:
And apparently there were nearly another 400 beers from close to 100 breweries. If I'd found them all, I probably still wouldn't be upright to share them with you.

There's probably much more to say, but you likely have already stopped reading. I'm constantly amazed both at the number of first-timers that I encounter at the festival. And also amazed at how many I still hear talk about the festival as a bucket list-type of beer event for them.

No doubt it continues to be an unforgettable experience and a Top 10-style beer event experience in the country. Is it the same as attendees recall 10+ years ago? Not in scale or price, but in the spirit, camaraderie, and celebration of great beer, food, and people - Yes, absolutely it is.
Written by Bryan Kolesar at Monday, August 15, 2016