Writing This Ship: Part 9 - Speaking of growth, how about Tröegs? 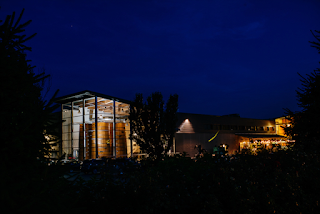 (photo credit: Tröegs Independent Brewing)
The other day, I shared the continued growth of the Iron Hill family and their newest location in Huntingdon Valley, Pa.

On yet a larger scale, out in Hershey, Pa., Tröegs has unveiled its spectacular new addition, the Splinter Cellar. They sure have come a long way from the humble beginnings in Harrisburg. Ordinarily I wouldn't simply repost a press release, but since I have yet to develop any first hand experience at the Splinter Cellar, it makes more sense just to get this out there for you.

Read the interesting and information-filled blog post and hang in there until the end where they discuss plans for 2017. Yes, I get excited for both greenspace and parking.

I haven't been to the brewery since earlier in 2015 just as they were breaking ground for the Splinter Cellar. When I return there later in October, I'm sure I'll have plenty more to share. Until then...

MEDIA ADVISORY: (July 14, 2016) Tröegs Independent Brewing has opened the doors to its wood-aging dream space, the Splinter Cellar. With three new 9,300-gallon foeders, the Splinter Cellar is a home for wild yeast and a wide-open canvas for creative cellaring. To celebrate the opening, Tröegs is releasing a limited amount of Wild Elf, a Pennsylvania Wild Ale made with local cherries and the microflora that hitchhiked in on them.

Our wood-aging dream space, a little something we’re calling the Splinter Cellar, is now open, and to help celebrate this milestone, we’re releasing a Pennsylvania wild ale called Wild Elf.

Back in 2010, brothers Chris and John Trogner were sketching their vision for a new brewery on the back of a napkin. If you’ve been to Tröegs, you know what they came up with: a large central Tasting Room, an open brewhouse, a self-guided tour path around a Quality Control lab, plenty of room for fermentation and a General Store for beer and goods to-go.

They also pictured a space dedicated to wood-aging. It would be a sanctuary for strong ageable ales, a home for wild yeast and bacteria, and a wide-open canvas for creative cellaring. From this space would grow a new series of Pennsylvania wild ales brewed with the fruit and microflora from our backyard.

Over the years we’ve given a home to nearly 300 wine, bourbon and virgin oak barrels, as well as three small oak tanks called foeders, but the dedicated wood-aging space kept getting shelved for another day.

That day has arrived. [Read more at the brewery's blog]