Beer books for Christmas - From the Mid-Atlantic to The World, read all about it 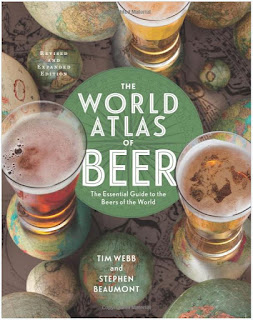 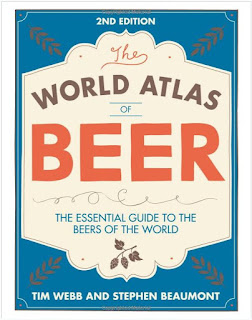 (UK cover)
There's nothing like a good beer book to gift for those beer friends, and even yourself, at this holiday time of year. I'm sure you expect me to promote mine and I will later down below. But much more significantly is the second edition of the comprehensive second edition of World Atlas of Beer.

I've finally had some time to dig into the World Atlas of Beer, given to me when authors Stephen Beaumont and Tim Webb visited Philadelphia two months ago. Of the two covers above, I have the UK version which I actually prefer to the US version.

It had been four years since the first edition was released and, hard as it might be to believe, much has changed in the world of beer since then. Beaumont and Webb took notice in the foreward where Webb acknowledges that "Our greatest challenge has been to present the different types of ale, lager, lambic, and mixed-fermentation beers that populate a beer market liberated from the constraints of uniformity." In the introduction, Beaumont adds that "Today, we cast our gaze upon twice that number, including Switzerland and Poland, China, and Israel - nations that previously merited but a sentence of two and now boast their own sections."

The book then dispenses the requisite definition of beer, its ingredients, and the brewing process. An interesting twist is found on page 35, where beer styles of the world are contained within one table and annotated with six columns comparing the associated "folk origins", "classic status", "extreme credentials", "alcoholic strength", "serious intent", and "historic influence". Webb and Beaumont, no doubt, think about their beer as much as they drink it.

The remaining 200+ color- and fact-filled pages traverse the world by continent, country, and sometimes region/style within country, leaving no pallet unturned. Each section melds discussion of both the styles, breweries, and people sigificant to the beer culture of the area. Here in the northeast, veteran brewers from Yuengling to Allagash, Boston Beer, Brooklyn, Dogfish Head, and Victory are spotlighted as are new breweries in the past five years such as Bluejacket, Double Nickel, Maine, and Tired Hands.

Even when eventually getting to areas of the world with little to speak of beer-wise, "The Rest of the World" captures some nuggets worth knowing in "Israel & The Middle East", "India & Sri Lanka", "South Africa", and "The Rest of Africa".

The book concludes with a useful and comprehensive "Enjoying Beer" section that covers buying, storing, pouring, and pairing beer and even includes a couple of valuable pages concerned with the identification of off-flavors in beer.

It will take me some time to get through the entire book, but Webb and Beaumont as world tour guides have made the journey much more tastefully enjoyable. 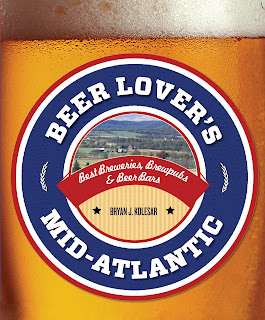 Then there's my book — Beer Lover's Mid-Atlantic. As you know if you regularly check in here at The Brew Lounge, I've barely slouched at all in promoting it during the last year-and-a-half since it was first released. There's a risk that these kind of books can look dated over time.

I'm quite pleased to say that it now - two years after the manuscript was submitted to the publisher - continues to stand the test of time rather well. While I obviously have no control over openings and closings, I included in the book roughly 320 establishments that I vetted for the sake of being concerned about just this point. Of course, plenty of places have opened and I accounted for those that I knew about in 2013-2015. As we all know, many more have come since then.

As for closures, I'm happy to report that only three places have closed that I included in the book. Baying Hound in Rockville, Md. Gamble Mill in Bellefonte, Pa. And, Nodding Head in Philly. Not too bad if I do say so.

While I claim to have nothing close to any talent in the realm of the guys behind the World Atlas of Beer, my book project represented a similarly ambitious endeavor focused on the beer world of Delaware, Maryland, New Jersey, and Pennsylvania. I sure hope you have your own copy. If you don't, click here for quick delivery from Amazon, or drop an e-mail to me if you're local to southeastern PA and I'll personally hand off a signed copy to you in time for the holidays.