Conshohocken Brewing has a Brewpub in Bridgeport 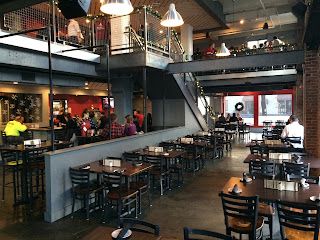 I was quickly reassured that I could easily be excused since it's only been about ten weeks. Well, whaddya know, I suppose that with its brewery HQ along the Schuylkill River Trail in Conshohocken nearing the third anniversary, my perception of time is a bit askew.

Regardless of the when and how of it all, I was pleased to find myself at the brewpub this past weekend after an invitation from brewery investor (and sports writer and talk radio host, plus Philadelphia Jewish Sports Hall of Fame inductee) Glen Macnow. Not surprisingly, the friends and family list of Macnow's includes a distinguished list of local notable sports figures, both on and off the field.

But that wasn't the nature of my visit (well, aside from personal pictures with Mike Quick and Ray Didinger - not that it really requires disclosure, rather an FYI, I suppose). I've been a steadfast follower and appreciator of the solid beers that Conshohocken has been putting out in the market. The Puddler's Row ESB has been a past occupant on my kegerator's tap tower at home. Its one of their flagship beers that deserves all the attention that it gets (as well as plenty more that it deserves to get if "true" beer fans open their minds and palates). I went as far to include it on my list of 20 beers that attendees should seek out when in Philly earlier this year for the Craft Brewers Conference. 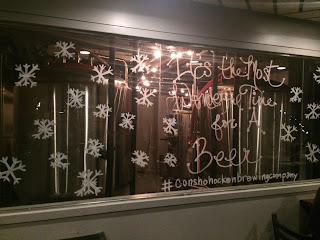 (A 3-barrel brewhouse (6-barrel fermenters) helps satisfy thirsts in Bridgeport.)
The brewery's collaboration with La Colombe - Tandem "Belgian-style Coffee Ale" - has been a dependable favorite of mine as has Island In The Sun Double IPA (8.9% with fresh pineapple). At the new Bridgeport brewpub, you can expect to find these plus core brands in addition to plenty of experimentation with new beers and styles from the on-site three-barrel brewing system (six-barrel fermenters). It's just large enough to supply the pub and, every once in a while, send some kegs back to the brewery's Taproom in Conshohocken.

The Head Brewer, Andrew Horne, is responsible for both locations as they bounce brewers between the two locations on an as-needed basis. At the Bridgeport Brewpub, the standards flow from the tap but beer lovers will also notice a couple of barrel-aged beers. As of my visit, Ten Ton Hammer (8.6% - bourbon barrel Doppelbock) and My Sweet Shadow (10% - bourbon barrel Baltic Porter) were impressing the crowd as were three others north of 8% ABV. The two barrel-aged beers are also available in a gift pack (plus glassware) perfect at this time of year.

Standouts new to me on the remainder of the draft list included the easy-drinking Ghost Bear Golden Ale (5.4% and available in 16-oz. cans), the roasty and chocolatey Henning's Stout (4.5% with English malts), and Red Eye Red Ale (4.5% deftly combining chocolate and crystal malts with Simcoe, Mosaic, and Chinook hops). Also on the menu, but untried by me, was Horne's first release of a kettle-soured beer - Shot Through The Tart (6.1% with Jarrylo and Mosaic hops). If I do some straight-average math on the non-Imperial draft list, it comes out to 5.5%. Not too shabby in my opinion. 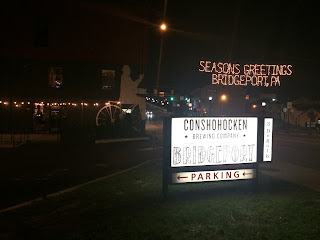 (Welcome to Bridgeport and Conshohocken Brewing's newest location.)
The ambiance, as you should be able to glean from the lead picture here, is quite comfortable. An open, airy two-floor layout has great sight lines that showcase the depth, the height, and generally speaking, space of the brewpub. For those that love the beer, but find the production brewery and its Taproom lacking for food or comfortable space, the brewpub satisfies on both counts.

Did I mention they have a fairly substantial parking lot? That they have something called Burger Mondays and Taco Tuesdays? That they have a kid-friendly menu? That truffle fries (with Pork Belly Bits?!!) scream out from the menu? And that on the 2017 wishlist is an outdoor beer garden with views of the Schuylkill River, which runs adjacent to the parking lot?

Conshohocken has been nicely growing its brewing presence in the region over the last couple of years and I look forward to the team solidifying its position as a go-to local brewery that comes to mind when discussing the best our region has to offer. I owe it to myself to return soon for a fuller experience with the kitchen menu and, naturally, more beer sampling. Until then, I'm interested to hear if you've been there and your opinions. 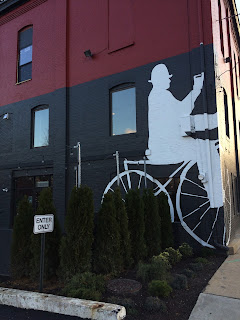 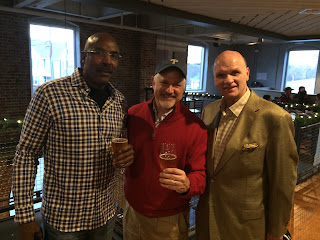 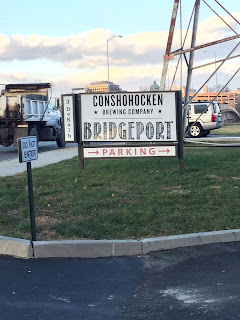 (Just the Bridgeport edge of the Schuylkill River sits the new Bridgeport Brewpub of Conshohocken Brewing Company, with plenty of parking.) 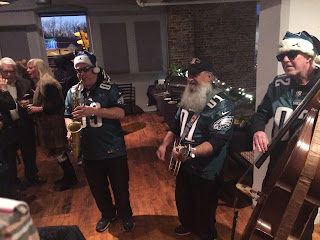 (The Eagles Pep Band showed up to fire up the crowd.)