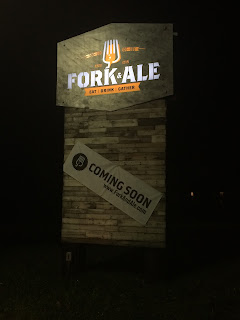 (Fork & Ale no longer coming soon, now *very* soon in Douglassville, Pa.)
A second soft opening for me in one week? Lots of year-end activity going on around here. (Not sure of what I speak? Check my Flying Fish Crafthouse opening update from earlier this week).

You'll be glad to know the Coming Soon sign is about to be changed to Now Open. The long-anticipated second location for Gary and Melissa Fry — Fork & Ale — has fired up the kitchen, turned on the draft lines, and had a couple of soft openings, one of which I attended last evening.

No specific date has yet been made public for the public grand opening, but you'll want to use your resources — driving by, checking social media, picking up telegrams, etc. — to find out how soon you'll be able to hunker down at the bar on the edge of Douglassville and Birdsboro for a plate of savory food and glass (or three) of exceptional beer from around the area and the world alike. 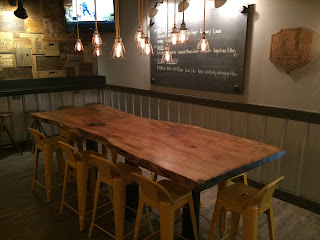 (A lot of personal sweat equity and touches went into the new Fork & Ale in Douglassville, Pa.)
That last sentence really hits home for me as my youth was split between Douglassville and Birdsboro and Fork & Ale is barely a mile as the crow flies from my Birdsboro house. Other than two breweries — Hidden River (3.6 miles away, I was informed) and Sly Fox (twice as far), and two bars — Liberty Taproom (near Reading), and Union Jack's (farther out near Boyertown) — I'm hard-pressed to think of many other good beer-and-food destinations in the nearby area. (Hopefully, I'm not setting myself up to be burned on that comment.) That should bode well for the Frys.

Another thing that should bode well for Fork & Ale is the proximity to the Schuylkill River Trail. In my upcoming article in County Lines Magazine, I mentioned the recreational trail with a burgeoning beer presence along it. From Manayunk Brewing in Philly out to Conshohocken Brewing to Iron Hill in Phoenixville to Tuned Up Brewing in Spring City, we can now add Fork & Ale to the list. The trail cuts directly along the property line and its trailhead parking lot provides riders, runners, etc. easy access to a year-round restroom facility, a bike repair stand, and now Fork & Ale's bar, restaurant, and outdoor bar convenient for the sweaty set.

But what of the kitchen and bar, you ask? For starters, the sweat equity put in by Gary, Melissa, and their friends and family is immediately evident when arriving through the front doors. There are coolers of beer just like at the sister restaurant — Craft Ale House — adjacent to the bar. The lighting, the handcarved table, the woodwork, and the birch tree branches (perhaps my favorite of the tasteful touches) all combine for a comfortable atmosphere. 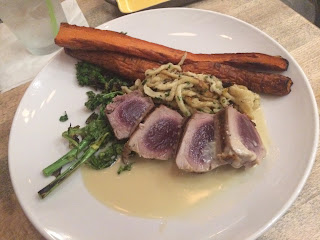 (Tuna with roasted carrots.)
Last night, I had the opportunity to dive into a couple of beers and a bunch of plates of food, courtesy of my wife Patty/BPIL (barstool partner in life as I referred to her in my book) and that guy, Matt Guyer, who always seemed to be pushing a plate of food my way. If there was a disappoint on the menu that Gary says will change frequently (more frequently than just seasonally), I didn't have it. Shrimp & Grits, Mushroom Soup, Oxtail Pappardelle, Deviled Eggs, Steak Frites, Cioppino, Tuna...I tried 'em all. If I had time here today, I'd go into detail. But I don't, so I can't. The recommendation to you, though, is to make a mental note to try any of them when you find yourself there.

At the bar, you'll find 15 draft beers (plus, one on nitro) from nearby, around the country, and from overseas. You can expect to see two wines on draft as well. At the soft opening last night, there were also three "craft cocktails" available — one with bourbon, one with rum, and one gin-based. 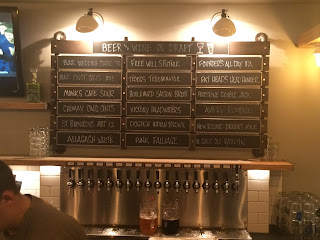 (A draft board plenty full of goodness at Fork & Ale in Douglassville, Pa.)
Veteran barstool hoppers that know Craft Ale House will see similarities in both the bar and kitchen menus; but yet they're almost entirely different. The decor and layout is definitely different, but otherwise locals will choose their favorite spot. One other difference will be the schedule — Craft Ale House will continue to be closed on Sundays while Fork & Ale will be closed on Mondays in order to take advantage of open hours during Sundays and the expected trail user crowds.

It was a labor of love that played out over the last two years to finally open Fork & Ale. From first impressions, it seems that the blood, sweat, and (were there?) tears, should pay off in short order. 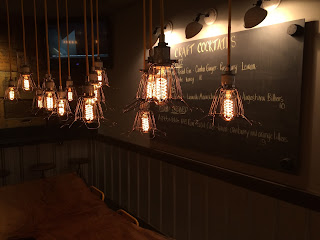 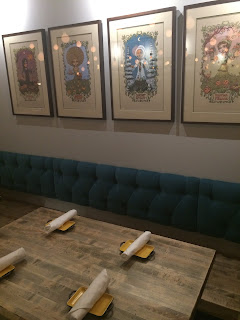 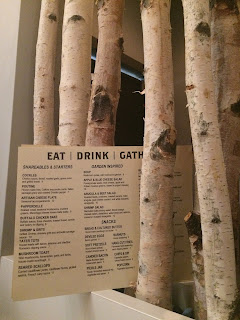 (The birch twigs - one of my favorite touches in the comfortable new Fork & Ale in Douglassville, Pa.) 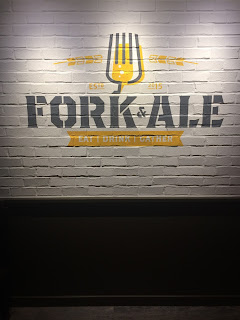 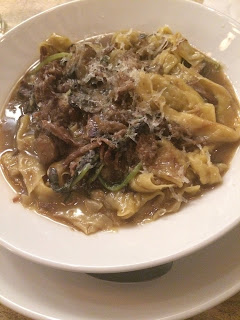 (Pappardelle with oxtail and mushrooms) 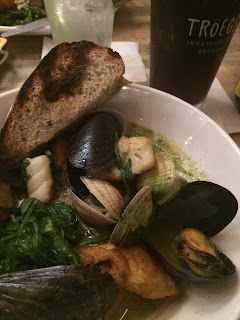 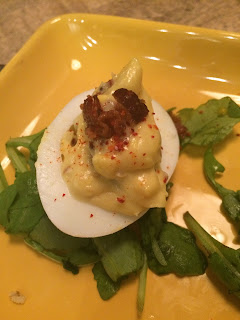