Not for lack of quantity during the last week, these were the lone three that stood out based upon quality. Presented alphabetically by brewery. 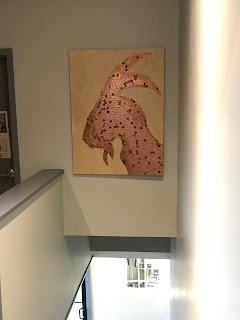 (If I don't have a picture of a beer at La Cabra, then the next best thing is the Cabra itself.)
~ Cecilia Saison, by La Cabra Brewing Company (Berwyn, Pa.)
Had this one a few times now. A very nice classic 5.5% slightly spicy saison which means it goes quite nicely with the jerk chicken tacos. Hope to see this one more often than not this summer. Oh, and on a related note, I'd like to see the Cubano a few more times as well. 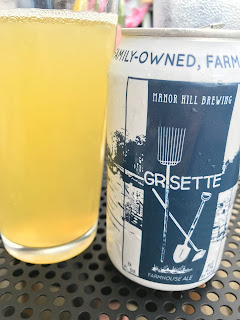 (Manor Hill's Grisette perfect for dockside drinking.)
~ Grisette Farmhouse Ale, by Manor Hill Brewing Company (Ellicott City, Md.)
Like Ruddy Duck below, I'd learned of the young Manor Hill while researching my book back in 2014. The farm-based brewery was in the planning stages and connected to the ambitious family behind the excellent Victoria Gastro Pub in nearby Columbia. Two years later, it looks like they've been doing quite well - brewing up a storm, growing plenty of their own resources, and packaging quite a bit of beer for the market. Like this excellent Grisette (4.7%), which was nice and refreshingly easy after a 4-mile walk to begin our weekend in Solomons. The Mosaic hops might have had something to do with this. It was enjoyed dockside at Kingfishers Seafood Bar & Grill along with a dozen local oysters. 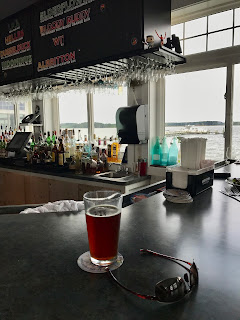 (Ruddy Duck Seafood & Alehouse has both good looking beers and a good looking backdrop.)
~ Dussel Duck Altbier, by Ruddy Duck Brewery (Solomons, Md.)
I'd originally discovered Ruddy Duck during my book research in 2014. They've since opened a second location in St. Mary's County, way down south on St. George Island. What a picturesque setting for a plate of seafood and a few beers! Particularly if it's the Altbier (5.2%), with a solid malt profile and ever-a-whisp of smoke. This was a very worthwhile diversion during last weekend's holiday getaway.