Remember how, if we throwback to the ancient days of yesterday, I mentioned getting some better content besides event calendars out here in this wondrous Brew Lounge space? How about we try a second consecutive posting day?

Out there in the strange social media world, I'll frequently put out snapshots of beers enjoyed at any given moment. A few astute, naturally, but brief comments. How about I share them with a bit more context here? Let's give this a try in a weekly format. The number of beers will vary from week to week, depending upon circumstances. But the idea will hold that I share some good and interesting beers and a few notes about the liquid or the people behind them.

Last week, I was in San Francisco for work with my day job's clients. Think I found some great beers along the way? Indeed I did.

In alphabetical order by brewery:

Hell or High Watermelon Wheat, by 21st Amendment Brewing (San Francisco/San Leandro)
I've long maintained that this is one of very few beers that makes perfect sense to be served with a piece of fruit on the rim. Take a bite of the sweet watermelon and then chase it with the beer that has a touch of refreshing tang from the the rind. And, it should go without saying, that it tastes even better at the airy 2nd Street brewpub. Next up for me - a long overdue first visit to the new production brewery across the Bay in San Leandro. 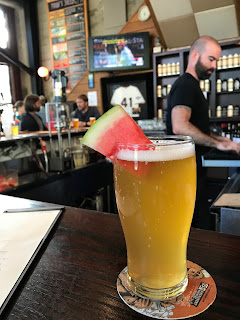 (The poster beer for 21st Amendment Brewery just a few blocks from the home of another city icon, the San Francisco Giants.)
Imperial Coffee & Cigarettes, by Cellarmaker Brewing (San Francisco)
Another batch of Taco Hands (collaboration with Philly-area Tired Hands) was on tap, so was the excellent Dank Williams. Better still, though, was the imperialized version of a the coffee beer original at Cellarmaker. Seems everyone is trying to find their way here, but a Thursday evening was near capacity yet comfortable with quick, attentive service. 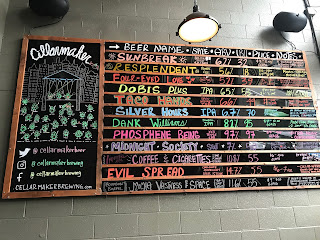 (Cellarmaker, one of the city's youngest and most sought-after breweries. Plus, just around the corner from City Beer Store.)
Citraison, by Faction Brewing (Alameda)
I'd heard enough of the great views and unique location of Faction Brewing. It's Rodger Davis' place of his own, who has a long history in brewing, most recently at Triple Rock in Berkeley. A two-hour "session" on Alameda Island (just south of Oakland) had me enthralled with the Pils, the Stomper Pale, and the Anomaly (pale) Milk Stout. Not to mention the entrancing views look back west toward the skyline of San Francisco. But the one I had two of was the perfect Citraison - with Citra hops, rose hips, and oh yeah, it benefits those with breast cancer. 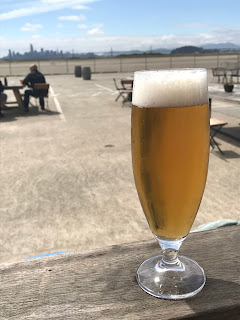 (A view of great beer and a great city from Faction Brewing Company in Alameda, Calif.)
Hitachino Nest Ancient Nipponia aged in Red Wine Barrels, by Kiuchi Brewery (Japan)
The new Hitachino Nest location on Post Street a few blocks from Union Square pretty much lived up to exactly what I was hoping it would be. Small plates of enticing food. The seductive cuts of Wagyu beef; I had Beef Tongue on a skewer. Plus, the usual suspects from the brewery in addition to some more special-than-average ones, such as Espresso Stout. But, I'm betting if you like the Nipponia Ale that, like me, you'll really love the red wine barrel-aged version. 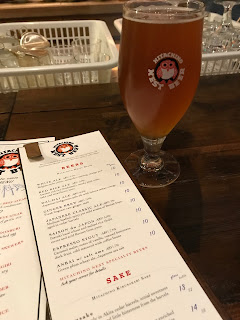 (Hitachino Nest, from Kiuchi Brewery, has its first home outside of Japan.)
Ashbury Alt, by Magnolia Brewing (San Francisco)
I was recently having a conversation back home in Philly about classic styles, Altbier being one of them that I love to find. Düsseldorf is the home of this wonderfully malt-forward style. Domestically, though, here in the States, there aren't many noteworthy ones of which to speak. The Ashbury Alt is certainly one that appreciators of the style should search out. And, if you're at the home of Magnolia beers at Smokestack, pair this with some ribs and brisket and you'll be quick to thank me. 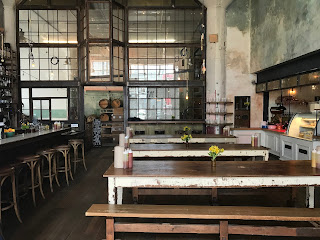 (A comfortable space in the Dogpatch neighborhood is home to Smokestack barbecue and Magnolia beers from owner/brewmaster Dave McLean.)
The 49er, by Thirsty Bear Brewing (San Francisco)
One of my last visits during this San Francisco trip was at the invitation of the good people of Thirsty Bear, who have been doing their Spanish tapas-and-beer thing on Howard Street very close to the Moscone Center for over twenty years. Brenden Dobel has been brewing there since 2002 and they went organic in 2007. This year for American Craft Beer Week (May 15-21), they're paying homage to the California Common indigenous yeast strain in three new beers. Dobel shared with me the California Common (already on tap) and the Cable Car IPC (still in the brite tank at the time and released this week). Both very, very well done and deserving of multiple glassfuls, but the one that caught my attention was the crisp, clean, and refreshing The 49er - showing a solid Pale and CaraPils malt bill with a tasteful hop kick from Magnum and Perle. Still want something more, something more unique? Check them out on Sunday evenings for live Flamenco dancing. 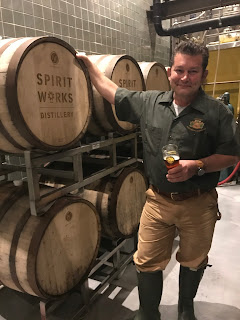