Alrighty, I enjoyed doing this last week so much, I'm gonna keep it going. As many of you know, "favorite" beers are often found in the context of people and place. This past week, for me, was no exception.

Again, in alphabetical order by brewery: 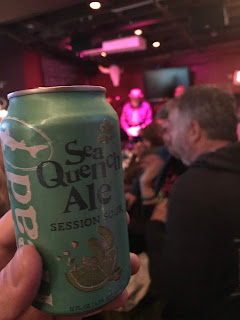 (SeaQuench takes center stage at Jose Pistola's.)
~ SeaQuench Ale, by Dogfish Head Craft Brewery (Milton, Del.)
A few weeks back, brewery sales rep Wendy Domurat tossed a couple of these at me. Lime and sea salt dominate this refreshing "session sour" (4.9%). Since then, a couple more six-packs have found their way into my cooler. In the past week, Men's Health, for what it's worth, gave it their nod of approval. This was a weekend pleaser too (see Free Will, next) during/after plenty of vigorous outdoor work. Plus, I took this one to my book signing too (see Spoonwood, further below) and the attendees were likewise pleased. Seems like this one will be around for a while. 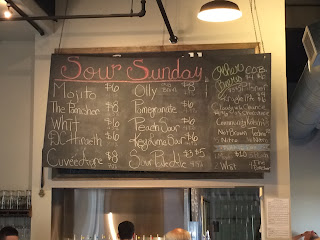 (Don't overlook gems such as the Kölsch.)
~ Community Kölsch, by Free Will Brewing Company (Perkasie, PA)
So much outdoor work got done this last weekend and early Sunday evening made it all worth it with this really nice and clean Kölsch (4.8%) with mild fruit notes from a brewery that gets plenty of attention for its sours. 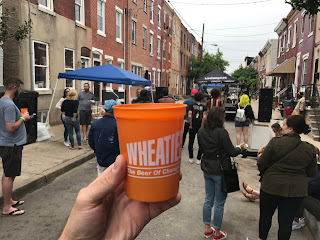 (The best meal of the day...and pleased to have finally made my first visit to the SPTR Wheat Beer Fest.)
~ Wit Or Wit Out, by St. Benjamin Brewing Company (Philadelphia)
Before heading off to the festival at Citizens Bank Park, my pal Greg and I stopped for a couple beers at South Philly Tap Room's annual Wheat Beer Fest. Only had time for two beers and some live music so I made one of them the St. Benjamin Wit or Witout. Gave me a chance to meet a new crew member at St. Ben, Shawn, and toss back a beer that I haven't had in a while. It's a solid and refreshing Belgian Golden (4.6%) with extra, but subtle, spicing. 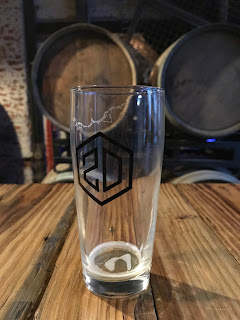 (This is how good it was.)
~ Meta Shepherd, by Second District Brewing Company (Philadelphia)
And after the festival at the ballpark, it was time for some South Philly neighborhood action. Only my second time at Second District, but both visits have been home runs. Any idea what goes extremely well with the Jalapeno Popper Grilled Cheese on the menu? This "smoked porter conditioned on juicy pineapple puree" (6%). Say what? "Weird and wonderful", perfectly described by the brewery. Really wonderful. 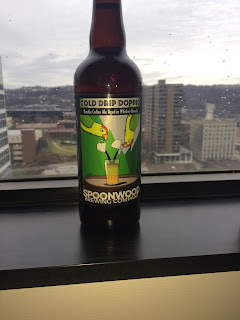 (A picture of Cold Drip Doppio before leaving Pittsburgh.)
~ Cold Drip Doppio (Wigle Whiskey barrel-aged), by Spoonwood Brewing Company (Bethel Park, PA)
Did you see the beers I was serving during my book signing last week? There was this one that really stood to both the attendees and me. It was this wonderfully layered strong coffee beer (8%) with whiskey barrel notes, all so well balanced and nothing overpowering. So smooth, so nice.