In Memory of Jack Curtin, part 1: "The Long and Sordid History" 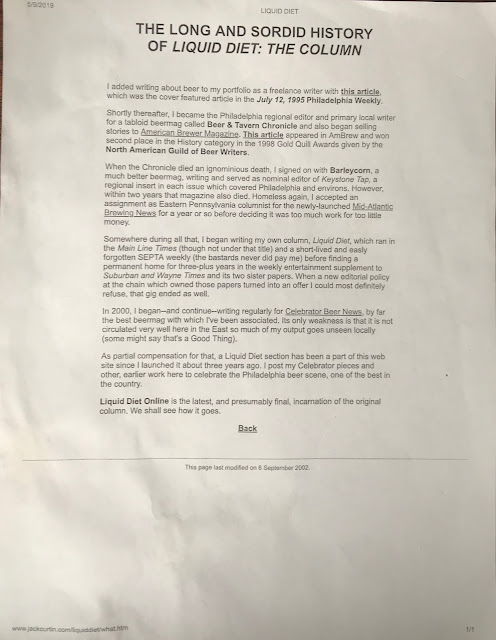 Here we go, off and running with the first part in the series that looks back on Jack Curtin as seen through his beer writing. Figured starting off with basically what was his About page on his blog would be the best place to begin. Earlier today I introduced my motivation for this series, which is still under development.

In this first entry, long-timers can fondly reminisce about Jack's past beer writing endeavors and newcomers can learn about the role he played in the craft beer segment's journey to where it is today.

On the page, it indicates it was "last modified on 6 September 2002". While he may not have updated it since then, we do know of course that he returned to MABN and set down roots as its Eastern PA correspondent for quite some time and worked with Sly Fox, Beer Yard, and numerous other freelance relationships.

This was short enough to re-type (incl. his original formatting), so I took that on myself. Don't get used to it for future postings because, based on some of their lengths, Jack would've told me that was a foolish waste of my time for which I wouldn't be paid!

The Long and Sordid History of Liquid Diet: The Column

I added writing about beer to my portfolio as a freelance writer with this article {no link available}, which was the cover featured article in the July 12, 1995 Philadelphia Weekly.

Shortly thereafter, I became the Philadelphia regional editor and primary local writer for a tabloid beermag called Beer & Tavern Chronicle and also began selling stories to American Brewer Magazine {no link available}. This article {no link available} appeared in AmBrew and won second place in the History category in the 1998 Gold Quill Awards given by the North American Guild of Beer Writers.

When the Chronicle died and ignominious death, I signed on with Barleycorn, a much better beermag, writing and served [sic] as nominal editor of Keystone Tap, a regional insert in each issue which covered Philadelphia and its environs. However, within two years that magazine also died. Homeless again, I accepted an assignment as Eastern Pennsylvania columnist for the newly-launched Mid-Atlantic Brewing News {no link available} for a year or so before deciding it was too much work for too little money.

Somewhere during all that, I began writing my own column, Liquid Diet, which ran in the Main Line Times (though not under that title) and a short-lived and easily forgotten SEPTA weekly (the bastards never did pay me) before finding a permanent home for three-plus years in the weekly entertainment supplement to Suburban and Wayne Times and its two sister papers. When a new editorial policy at the chain which owned those papers turned into an offer I could most definitely refuse, that gig ended as well.

In 2000, I began -- and continue -- writing regularly for Celebrator Beer News {no link available}, by far the best beermag with which I've been associated. Its only weakness is that it is not circulated very well here in the East so much of my output goes unseen locally (some might say that's a Good Thing).

As partial compensation for that, a Liquid Diet section has been part of this web site since I launched it about three years ago. I post my Celebrator pieces and other, earlier work here to celebrate the Philadelphia beer scene, one of the best in the country.

Liquid Diet Online is the latest, and presumably final, incarnation of the original column. We shall see how it goes.

<<<--- Back to the Intro post
A link for you to head off to Part 2 --->>>
© Bryan J. Kolesar and The Brew Lounge, 2020. All content is owned and uniquely created by Bryan J. Kolesar. Unauthorized use and/or duplication of this material without express and written permission from Kolesar is strictly prohibited. Excerpts, images, and links may be used with advance permission granted and only provided that full and clear credit is given to Bryan J. Kolesar and The Brew Lounge with appropriate and specific direction to the original content. Contact Kolesar at TheBrewLounge@gmail.com