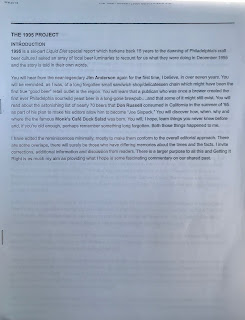 Fitting that this 6th entry in my Jack Curtin-In Memoriam series is a 6-part series of Curtin's — The 1995 Project. Actually, it was part of my decision to run this series. On Facebook, Don Russell (aka Joe Sixpack) made passing reference to Curtin's writing during this era. Turned out I had printed copy of all 6 installments of The 1995 Project that had been used during his retirement party last year.

Unlike other tribute pieces I've put up here for Jack, there's no way that I'm retyping 26 pages of his words. However, if you click the picture above, just as with the other re-postings of his past work I've done here, you can download your own entire PDF version of the original if you prefer. I'll lead off below with his verbatim Introduction and then will type out a few significant bits and bytes from each of the Project's parts. Also, you should read my comments after Part 6; they're quite excellent, if I do say so!

Really, there is great stuff in these 6 parts of The 1995 Project. It's both informational, historical, a great reference document, and at the same time entertaining. When I first introduced this project a couple weeks ago, just days after his death, that last attribute was a hallmark of Jack's that I pointed out as somewhat rare. If I could've weaved in that missing element of entertainment to my reality/fact-based writing, I might've made something of myself and my own writing.

This was exclusively blog content, best I'm aware, and not published in any of the typical beer rags.

The 1995 Project: Introduction
"1995 is a six-part Liquid Diet special report which harkens back 15 years to the dawning of Philadelphia's craft beer culture. I asked an array of local beer luminaries to recount for us what they were doing in December 1995 and the story is told in their own words."

"You will hear from the near-legendary Jim Anderson again for the first time, I believe, in over seven years. You will be reminded, as I was, of a long forgotten small sandwich shop/delicatessen chain which might have been the first true "good beer" retail outlet in the region. You will learn of a publican who was once a brewer created the first ever Philadelphia sour/wild yeast beer in a long-gone brewpub...and that some of it might still exist. You will read about the astonishing list of nearly 70 beers that Don Russell consumed in California in the summer of '95 as part of his plan to make his editors allow him to become "Joe Sixpack". You will discover how, when why and where the famous Monk's Cafe Duck Salad was born. You will, I hope learn things you never knew before and, if you're old enough, perhaps remember something long forgotten. Both those things happened to me."

"I have edited the reminiscences minimally, mostly to make them conform to the overall editorial approach. There are some overlaps, there will sure be those who have differing memories about the times and the facts. I invite corrections, additional information, and discussion from readers. There is a larger purpose to all this and Getting It Right is as much my aim as providing what I hope is some fascinating commentary on our shared past."
-----------------------
from Part 1, the Promoter: "Being a Better Beer fan in Philadelphia December 1995 was as exciting as things get. We were on the verge of this great positive shift, microcosmic of what must be going on in Russian and China now, fifteen years later. It was all happening very quickly. To those of us on the ground, it meant that the things we wanted were finally coming to us. Carefully planned trips to Old Bay and Stoudts were turning into impromptu gatherings at Dock Street Brewery & Restaurant or Samuel Adams Brew House." (Jim Anderson)

from Part 2, the Publicans: "It was nice to have Sundays off. Many Sundays were spent over in Tom's house in Collingswood It was usually Aimmee Prozan (who bartends at Nodding Head still), James Fernandes (now our managing partner at Grace Tavern), and me, visiting Tom & Barbara. I was such a city rat back then I thought that Tom lived in the country. He had a fridge paced with brewed goodies in his garage and it was very educational, although I will admit that I would forget most of what I learned until the next time. We explored many different Belgians and also a fair amount of American craft beers, especially from the West coast. I do remember trying beers from Anderson Valley, North Coast Brewery, Anchor beers, and much more. Sierra Nevada Pale Ale in bottle was our 'Budweiser' back then. One Sunday, late in the evening we all were famished (read that as you will). Tom has some duck breasts in the fridge. I thought we were going to fry them and eat them on Kaiser rolls. No, Tom worked his magic and cooked the duck perfectly, served it on a salad with goat cheese, spiced walnuts, and raisins with a vinaigrette. This was the first appearance of the famous Monk's Cafe Duck Salad." (Fergie Carey)

from Part 3, the Founders: "1995 was my first winter in Manayunk. Back then I was driving a Nissan 300z, I almost killed myself trying to navigate the Polish Alps of Philadelphia. Within a week, I was driving a Isuzu Trooper. The window of the brewery and the door was always steamed up from the boil kettle so it always seemed really cold outside. I worked on Thanksgiving after an early dinner so I could have off Black Friday. Jon and I were invited to the Dawson Street Pub Christmas party/dinner seemed like a good fit. We came out with our first Christmas beer, a dark mild, in one liter flip-top bottles and it had a red and green label, and we gave it out to bar owners, friends, and the press." (Tom Kehoe)

from Part 4, the Brewers: "I was racking a Bock beer out of a grundy under the tutelage of Phil Markowski at the Brewer Bier House in Merrimack NH. When I unhooked the hose improperly, I was thrown across the cellar by spraying bock beer. It took me an hour to clean up the mess, all the time under the assumption that when Phil found out I would be let go. He never came by during that hour. After all was put away, and I had washed half my body and my hair in the bathroom sink, I found Phil and told him the news. He laughed and simply said, "I bet you won't do that again." I worked extra hard for the next few weeks thankful that he had given me a free pass." (Brian O'Reilly)

from Part 5, the Ladies: She and husband George Hummel were perhaps the ultimate enablers of dreamers hoping to create a new beer culture via their Home Sweet Homebrew shop. "I remember that 1995 good beer was almost like a secret society—a small interconnected polygot of those of us with an esoteric appreciation of these weird hard-to-get beers that defied any real classification, and like the burgeoning appreciation for interesting foods and cuisines, set us all apart from the mass approach of even the hard to obtain, yet often unexciting, imports. The willingness to try something that hadn't been attempted before (draft Belgians, anyone?) germinated in the late 90s, and the idea that anything was possible. Startling to think that the ensuing generations, those that have never known a world without craft beer, were barely entering their teens then, and really don't have an appreciation of how this current bounty came about." (Nancy Rigberg)

from Part 6, the Enablers: "I'm usually a bit reticent about discussing events 15 years past, as beer memories tend to get a bit fuzzy (as in, nobody really 'defected' to Sugar Mom's, but several friends worked at both bars). I really just have a mathematical formula, thus - "Jesus Lizard + Old Crustacean + Guided By Voices + Fullness (1/2 Fuller's ESB, 1/2 Guinness) + fascinating co-workers and friends/customers = Khyber Pass Pub." (Chris Morris)

© Bryan J. Kolesar and The Brew Lounge, 2020. All content is owned and uniquely created by Bryan J. Kolesar. Unauthorized use and/or duplication of this material without express and written permission from Kolesar is strictly prohibited. Excerpts, images, and links may be used with advance permission granted and only provided that full and clear credit is given to Bryan J. Kolesar and The Brew Lounge with appropriate and specific direction to the original content. Contact Kolesar at TheBrewLounge@gmail.com
Written by Bryan Kolesar at Thursday, September 17, 2020