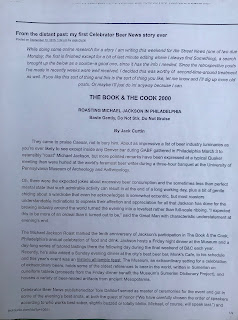 This unofficial memorial that looks back on the life of Jack Curtin as seen through his beer writing got off to a great start last week. Thanks to the many of you that have followed along thus far, sharing and commenting on the first couple pieces that I put up. Follow this link where you'll find more about my motivation for this series, which quite honestly still continues to evolve as I work through this largely on the fly. (I know Jack, no doubt, would be impressed, ha!)

In today's entry, I take you back to an article he wrote for the April/May 2000 issue of Celebrator Beer News. It was entitled "The Book and The Cook 2000: Roasting Michael Jackson in Philadelphia. Baste Gently, Do Not Stir, Do Not Bruise". When he re-posted it in 2015 on his Liquid Diet blog, he referred to it as his "first Celebrator Beer News story ever" and one that he "decided was worthy of second-time-around treatment".

They came to praise Caesar, not to bury him. About as impressive a list of beer industry luminaries as you're ever likely to see except inside any Denver bar during GABF gathered in Philadelphia March 3 to ostensibly "roast" Michael Jackson, but more pointed remarks have been expressed at a typical Quaker meeting than were hurled at the world's most foremost beer writer during a three-hour banquet at the University of Pennsylvania Museum of Archeology and Anthropology.

Oh, there were the expected jokes about excessive beer consumption and the sometimes less than perfect mental state that such admirable activity can result in at the end of a long workday, plus a bit of gentle chiding about a wardrobe that even he acknowledges is somewhat eccentric, but most roasters understandable inclinations to express their affection and appreciation for all that Jackson has done for the brewing industry around the world turned the evening into a lovefest rather than a full-scale ribbing. "I expected this to be more of an ordeal than it turned out to be," said the Great Man with characteristic understatement at evening's end.

The Michael Jackson Roast marked the tenth anniversary of Jackson's participation in The Book & The Cook, Philadelphia's annual celebration of food and drink. Jackson hosts a Friday night dinner at the Museum and a day-long series of tutored tastings there the following day during the final weekend of B&C each year. Recently, he's also added a Sunday evening dinner at the city's best beer bar, Monk's Cafe, to his schedule and this year's event was an historic all-lambic feast. The Museum, an extraordinary setting for a celebration of extraordinary beers, holds some of the oldest references to beer in the world, written in Sumerian on cuneiform tablets (proceeds from the Friday dinner benefit the Museum's Sumerian Dictionary Project), and houses a variety of beer-related artifacts from ancient Mesopotamia.

Celebrator Beer News publisher/editor Tom Dalldorf served as master of ceremonies for the event and got in some of the evening's best shots, at both the guest of honor ("We have carefully chosen the order of speakers according to who works best sober, slightly buzzed, or totally blotto. Michael, of course, will speak last.") and the roasters themselves (American Brewer publisher Bill Owens was introduced as "The Andy Warhol of beer."). He also obligingly wore a kilt, thus making himself the, you should excuse the expression, butt of as many jokes as was Jackson.

Most speakers' comments centered around a first meeting with Jackson or his impact on their brewing lives. Anchor Brewing's Fritz Maytag recalled the early days "when I thought my brewery was the only interesting small brewery in the country and how wonderful it was I found out Michael thought that as well." And All About Beer's Dan Bradford noted that "beer writers can only follow Michael Jackson, there is no other model. He created the vocabulary and the content of what we do."

Oliver Hughes of Dublin's Porter House Brewing Company, Ireland's first brewpub, remembered how local journalists, no matter what they were told, regularly reported that his Oyster Stout "made you good between the sheets" and how he and his staff groaned one afternoon when told a journalist was on the line, until informed "he says his name is Michael Jackson." I have never seen our brewer move so fast before or since," laughed Hughes. Ale Street News' Tony Forder remembered when Jackson's Great Beers of Belgium was blessed by a Cardinal in New York and "Michael suddenly became less digressional, more coherent, even remembered names," before presenting him with a pair of Saint Michael undershorts flown in from England.

The highlight of the evening was the presentation by Sam Calagione of Delaware's Dogfish Head Brewery, who offered a short story in the style of Raymond Carver ("Michael told me last year that Carver was his favorite American writer") about Jackson's life in an alternate universe wherein he passes a sobriety test in very impressive and very funny fashion.