In Memory of Jack Curtin, part 2: "Belgium in Philadelphia, the early years" 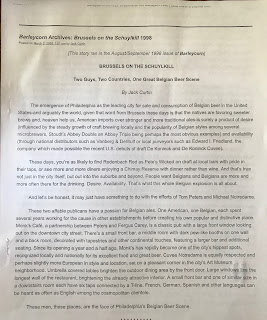 Jack liked to tell stories, right? But Jack also had a thing for facts. As in, get 'em straight. He never hesitated to point out or question something he knew or believed to be incorrect in my writing. Made me a better writer, particularly from a research perspective. He wouldn't just slough it off like too many others that might say something like "eh, close enough" or "what does it really matter?"

As time goes by and at unfortunately increasing frequency, I'm coming across partial truths and sometimes just outright guesses as to what might be considered basic Philly Beer 101. Lazy research or indifference to fact. Just a little research can help uncover a better understanding from those that were there and it's yet another reason why I think to keep writing like Jack's alive is important.

Case in point here with today's article regarding the roots of the Belgian beer scene in Philadelphia.

We got off to a great start here yesterday with the first part in the series that looks back on Jack Curtin as seen through his beer writing. Follow this link where you'll find more about my motivation for this series, which is quite honestly still under development.

In today's entry, I present to you Jack's article he wrote for the August/September 1998 issue of Barleycorn. It was entitled "Brussels On The Schuylkill: Two Guys, Two Countries, One Great Belgian Scene". 22 years ago, amazing! Below, I've included some important snippets from the article, since re-typing all three pages is pushing my limits. If you want your own copy, be sure to click the picture above for a full PDF version of it.

That'll be it for this week. I'll be back after the holiday weekend with more for your memory lane traversing pleasure.

Enjoy! And, as mentioned before, please feel free to comment your own memories and share around your social networks. Cheers!

"These days, you're as likely to find Rodenbach Red as Pete's Wicked on draft at local bars with pride in their taps, or see more and more diners enjoying a Chimay Reserve with dinner rather than wine. And that's true not just in the city itself, but out into the suburbs and beyond. People want Belgians and Belgians are more and more often there for the drinking. Desire. Availability. That's what this whole Belgian explosion is about. And let's be honest, it may have something to do with the efforts of Tom Peters and Michael Notredame."

"When he came home, he went to his boss at the old Cafe Nola on South Street, where he was a bartender, and suggested ordering Chimay for the beer list. "He said it was too expensive, that we'd never sell it, but I promised to buy the case myself if that turned out to be true. I think it took less than an hour to sell the whole thing", he laughs now. In 1987, Peters moved on to become manager at Copa Too! and dove headfirst into serious beers, including whatever Belgians he could lay his hands on. He managed to acquire 14 kegs of Kwak in the summer of 1995, marking the first time a Belgian was offered on draft in the U.S."

"Notredame demurs politely to the suggestion that he and Peters played any significant role in Philadelphia's fascination with Belgians ("I wouldn't say that but you can, of course"), and has some further thoughts on the matter. "I believe that the great interest in homebrewing in this country in recent years contributed greatly to the demand. When you start homebrewing, you quite naturally begin to read more and more about beer and the person to read, obviously, is Michael Jackson, who is a great Belgian beer fan. Someone reads what Jackson has to say and he wants to try his hand at making the style. In order to copy the original, you must taste the original, so those people began searching out Belgian beers." Like Peters, Notredame believes that his selection of anywhere from 60 to 120 Belgian brews is probably greater than that found in most bars in Belgium. "We have beers here regularly that they hardly ever sell back home", he says. "In fact, we probably sell more Cantillon Rose de Gambrinus at Cuvee than they sell in all of Belgium."