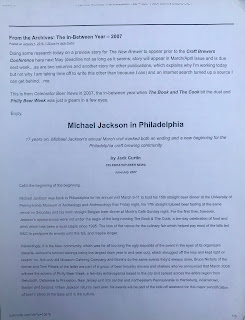 This unofficial memorial continued yesterday with a look back on the life of Jack Curtin as seen through his beer writing in an article he'd written about Michael Jackson in Philly in 2000. Today Jack takes us forward to summer 2007 with an article he wrote, again for Celebrator Beer News and again about Michael Jackson in Philly.
This time, however, it was during a transitional period between The Book & The Cook and the dawning of Philly Beer Week in 2008. It was simply entitled "Michael Jackson in Philadelphia.". When he re-posted it in 2016 on his Liquid Diet blog, in his setup he referred to the motivation for re-publishing it as only Jack could -- "an Internet search turned up a source I can get behind...me".

Michael Jackson was back in Philadelphia for his annual visit March 9-11 to host his 15th straight beer dinner at the University of Pennsylvania Museum of Archeology and Anthropology that Friday night, his 17th straight tutored beer tasting at the same venue on Saturday and his ninth straight Belgian beer dinner at Monk's Cafe Sunday night. For the first time, however, Jackson's appearances were not under the aegis of the long-running The Book & The Cook, a ten-day celebration of food and drink which has been a local staple since 1985. The loss of the venue for the culinary fair which helped pay most of the bills led B&C to postpone its events until this fall, and maybe longer.

Interestingly, it is the beer community, which was for all too long the ugly stepchild of the event in the eyes of the organizers (despite Jackson's tutored tastings being the largest draw year in and year out), which shrugged off the loss and kept right on keepin' on. Not only did Museum Catering Company and Monk's do the same events they'd always done, Bruce Nichols of the former and Tom Peters of the latter are part of a group of beer industry movers and shakers who've announced that March 2008 will see the advent of Philly Beer Week, a ten-day extravaganza based in the city and spread across the entire region from Rehoboth, Delaware to Princeton, New Jersey and into central and northeastern Pennsylvania to Harrisburg, Adamstown, Easton, and beyond. When Jackson returns next year, his events will be part of the kick-off weekend for this major sanctification of beer's place at the table and in the culture.

The Friday night dinner at the Museum may have been the last since it might not be carried over into Philly Beer Week, Nichols said. If this was the swan song, it was a good one. A three-course meal of mixed green salad, beef filet with a shallot demi glace and saffron risotto and Expresso semifredo was accompanied by a dozen beers, four of them at the opening reception and the others served with dinner. The eclectic nature of the brews poured was represented by the presence of Hoptimus Prime, a double IPA brewed for the local Union Jack's chain of pubs by Reading's Legacy Brewing, to the hard-to-find Brasserie Artisanale Dieu du Ciel from Montreal to O'Callaghan's Irish Breakfast Stout, a creation of local homebrewing guru George Hummel. These were accompanied by familiar labels from locals Dogfish Head, Nodding Head, Stoudts, and Victory and from Arcadia, Avery/Russian River, Blue Point (NY), and Port Brewing.

A new wrinkle at the Saturday Tasting (once again, a 1500 seat sell-out for the three session) was Dogfish Head's Sam Calagione acting as an interlocutor of sorts for Jackson's presentation and helping to keep things moving along. The theme for the day was Extreme Beers; the first of eight beers poured was Allagash White, which, while a grand brew, doesn't quite for that category. No matter how the definition of what is and what is not extreme is bended and twisted these days to try and match various agendas, there's just no way to come up with one that matches Allagash White. End of sermon. You can decide about the "extremeness" of the other beers on the docket yourselves: George's Fault (Nodding Head), Peche Mortel (Brasserie Artesinale Dieu du Ciel), Cassis (Iron Hill), Hop 15 Double IPA (Port Brewing), Old Horizontal (Victory), Red & White (Dogfish Head), and Collaboration, Not Litigation (Avery/Russian River).

A fun moment came when Sam asked Michael for his opinion of the trend toward excessively hopped IPAs and received an answer he probably didn't want. "I never thought they could make a beer which was too hoppy for me," quoth the Bard, "but they're getting close." Another came at the end of the two-hour beerfest which follows each session in the Museum's Chinese Rotunda. I got to clang the gong ending the first of these, an honor which felt both wrong and right, hating to end everybody's fun but enjoying the hell out of the great booming clang I'd created. Does enjoying these sorts of things make me evil?

Sunday night at Monk's was special. You got The Man, you got The Venue, you got The Beer. It was all good. THe theme this year was saisons and farmhouse ales and the beers poured were Ommegang Ommegeddon, Vapeur Saison de Pipaix, Fantome Bis Bon Bon, De Ranke XX Bitter, Saison Dupont (shocker!), Blaugies La Moneusse, and Moinette Bruin. Chef Adam Glickman and his staff were up to the task as usual, whipped up an appropriate feast which was highlighted by Belgian Endive wrapped in Ardennes Ham, an extraordinary County Pate, and an incredible pan-seared Red Snapper with watercress sauce. Michael was in full-digression mode, telling stories of his early days as a teen-age reporter, recounting trying to answer the unique question once posed by a gaggle of Glasgow soccer hooligans ("Are you a Protestant Jew or a Catholic Jew?") and quoting Dylan Thomas and Woody Allen along the way.

Hey, I love that stuff. I can figure out the beers on my own, but the stories...? Priceless.


YES, JACK! The stories that come with the beers are indeed priceless.

Email ThisBlogThis!Share to TwitterShare to FacebookShare to Pinterest
Categories: Beer Writing, Jack Curtin, Philadelphia, Rest in Peace, The Book And The Cook