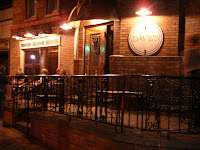 While I can be fairly certain that no one goes to Alabama in search of beer, you may find yourself in the Magic City (Birmingham, that is...seriously, that's their nickname) someday and want to find an interesting beer. Alabama is one of the few remaining states with an ABV cap on beer set at six percent. With the law currently stacked against much of the better and more interesting beer of the world, bars like Dave's Pub are left to do the best job they can within the letter of the law to bring good beer to its customers. (By the way, do you want to check out the State's plight? Go visit the well-maintained website, Free The Hops, to see how things are progressing in their fight to change ill-conceived legislation. It's worth it.)

My trip to Birmingham last week allowed me to once again explore this decent little hangout in the Five Points area, near the UAB campus. I used to get to Birmingham fairly often and Dave's was a place that I'd been to a few times before. Though, it had been almost two years since I was last in Birmingham and this trip was barely a 24 hour southernly jaunt. After deplaning at 8:30pm, I quickly checked in to the hotel and was sitting at Dave's by 9:15pm. This was after staggering down the street in 98F heat that made it feel as if the sun was still hung high in the sky.

The pub is located on the southern edge of Five Points and has a front porch area running the length of the building that overlooks the street action. The Five Points area is definitely considered a nighttime destination for many locals and tourists alike. With the variety of ethnic dining options, bars, and nightclubs there is a little something for everyone here. 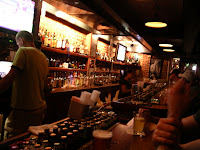 Okay, back inside to Dave's. Obviously, the weather was hot so almost everyone was hunkered down in the air conditioned bar instead of outside. Dave's is a dimly lit bar of brick and wood...very pubby feeling indeed. It's a smoking-allowed pub where the staff is just friendly enough to make for a pleasant visit. The brightest area is at the bar where two flat screen TVs hang above showing some variety of sporting events. (This was the night of Barry Bonds' 756, for whatever that's worth.) The remainder of the seating area fades back into a scattering of high-tops and a jukebox. And, after noticing the missing footrail at Union Barrel Works, I rediscovered at Dave's the beauty of a well-placed footrail! 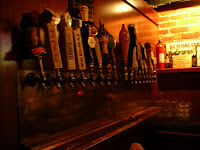 As I mentioned earlier, Dave's does do the best it can to bring in the better of the lower alcohol domestic craft and imported beers. Local favorites of the south, Terrapin and Sweetwater, are readily available by draft and bottle. Lower gravity offerings from Left Hand, Rogue, Sierra Nevada, Weihenstephaner, Anchor, Brooklyn, Red Hook, Franziskaner, Paulaner, and Mackeson are some of the better stocked beers at Dave's. While the taps are lined up approximately 20 long across the far wall, the bottles are presented in an ice trough along the bar top for the seated customers to help themselves to....I mean, to look at. My choice of the litter on this particular evening was a solid standby, Weihenstephaner Hefeweissbier, and a surprisingly well-done newcomer (in my logs) in Terrapin's India Brown Ale.

Food? I wasn't eating and I neglected to check, but I don't believe they have a kitchen there. I could be wrong, so it will have to take a follow-up visit next time double-check this! In the meantime, should you find yourself in the Magic City, check out Dave's. You can't do much better.