Getting Started in Homebrewing - Racking to a Secondary Fermenter

Click here for an index of Getting Started in Homebrewing
Racking (in layman's terminology, moving or draining) to a secondary fermenter is not absolutely necessary. But, I figured it didn't involve that much extra effort, bought me a little more time before bottling, and increased the chances for a more clear, stable, and better beer. The jury's out on those last three claims until I pop open the first bottle. But, the big idea is getting it off the sludge of yeast and other matter that had fallen to the bottom of the bucket after the primary fermentation had completed and allowing the beer to condition a bit more.

After a week in the plastic bucket that served its role in the primary fermentation, the frothy crud produced during fermentation (aka krausen) had mostly fallen to the bottom along with other particles (hops, proteins, and other stuff that I'm sure I'm not aware of) that didn't get strained out on its way into the bucket. 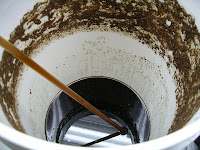 How did I know that it was ready to be racked? Well, honestly, I didn't. The fermentation never got up to a vigorous level of activity, but krausen was being produced...and had subsequently fallen. Watching the airlock bubble at a couple of times per minute for a few days, then not at all for a couple of more days seemed to indicate that some level of fermentation had indeed taken place. Plus, when I took the hydrometer reading, the result was 1.020 (down from an OG reading of 1.050). So, even though there may still have been a bit more fermentation yet to take place in the secondary (which, by many accounts, is not surprising), I felt comfortable racking it to the carboy. 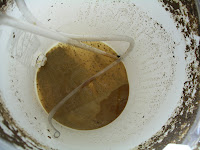 Getting the beer into the glass carboy serving as the secondary fermentation vessel started with, you guessed it, sanitation. The glass carboy, racking cane, plastic tubing, and airlock (to be used again on the carboy) were all soaked in the bleach solution to be sanitized. 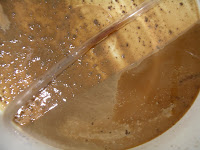 After a thorough rinsing and drying of these parts, I started the process of moving the beer. I filled the plastic tube with water, attached it to the racking cane, submerged the racking cane in the plastic bucket full of beer, and allowed the siphoning to begin. I ran the water out of the tube into a plastic cup until the beer started running through, then took a sample from the tube for a hydrometer reading, then shoved the tube to the bottom of the glass carboy. I was careful to minimize the splashing, or aerating of the beer, as it siphoned over from the plastic bucket. With the fermentation mostly completed, there was no need to get more oxygen into the beer. 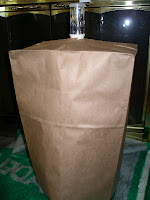 If I thought this whole process of making beer required patience, then the secondary fermentation was the true test. The plan was to leave it in there for two weeks before bottling it. I kept the carboy covered with a brown paper bag (with a hole cut in the top for the airlock and neck to stick out) and kept the temperature regulated between 68-75F (best I could do in the northeast's summertime). After 8 days, things got interesting. Days 9-12 all of sudden brought more vigorous bubbling in the airlock than it had experienced in the primary. It coincided with a dramatic shift in the weather...cool, damp, rainy conditions. Approximately 3/4" of loosely packed bubbles sat on top of the beer for almost 2 days as it bubbled through the airlock several times a minute. Then, it began to subside and the bubbling slowed. 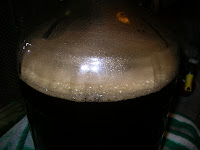 Days 13-17 saw no activity whatsoever. This led me to believe that it may be ready to bottle. Adam loaned his "beer thief" to me so that I could taste the beer and take a hydrometer reading. I did not, but planned to do so before making the decision to bottle the beer.


Click here for an index of Getting Started in Homebrewing

Catching up a bit on your progress over here. When can we taste it!? :-)

Patience, the number one ingredient in brewing.