Getting Started in Homebrewing - Sanitizing & Boiling

Click here for an index of Getting Started in Homebrewing
After laying out the ingredients and equipment, I figured my first step was sanitation. It was, but I quickly learned that this can be done while bringing the water to a boil. See, this much water takes a while to boil and you know that thing about a watched pot, right? 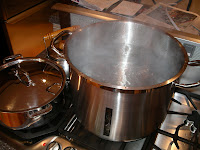 Since I used a 24 quart stock pot, I didn't feel comfortable trying to do a full 5 gallon boil in one pot. Adam advised that I do a partial boil. I used a smaller pot to boil 1.5 gallons, then set it aside for incorporation later. In the large stock pot, I brought a little over 3 1/2 gallons to a boil. 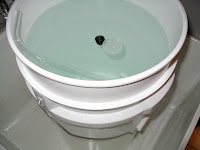 While boiling the water, I mixed somewhere around 1/2 cup of ordinary (unscented) household bleach with approximately 5 gallons of water in the plastic fermenting bucket. Into the solution, I put any equipment that would touch the wort after it begins the cooldown from its boil. This included the plastic bucket (obvious, right?), the airlock, the strainer, and the thermometer.

While bleach worked just fine, I may consider using something else to sanitize in the future. With bleach, I needed to very careful to control splashing. Also, thoroughly rinsing after soaking the equipment was mandatory so not to leave any bleach behind. And, while time wasn't a factor, when using bleach to sanitize, it's recommended to allow the equipment to soak for approximately 30 minutes. Using an alternative like Iodophor would require less time soaking, less care in handling, and no rinse cycle. 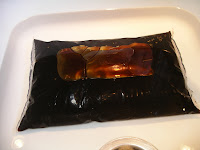 After a few good rinses and drying, the equipment was sanitized. In the meantime, the 3.5 gallons came to a boil around 45 minutes after lighting the flame on the cooktop. Time to add the malt extract. Also concurrently, I had placed the bag of liquid extract in a sink of shallow warm water to help soften the liquid a bit more. I added the extract slowly, stirring it around to prevent scorching on the bottom. This obviously lowered the temperature, so I needed to return the mixture to a boil. I kept the rolling boil for a little over 60 minutes, stirring occasionally. 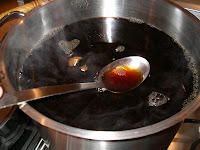 Check back again soon for more information about the boil, the malt, and adding hops to the boil.

Tom, what do you do? Are you listening?

The 1.5 gallon boil was started 2 hours before I did the 3.5 gallon boil. That was only partly intentional, since I needed to make a Home Depot visit for an sink faucet adapter for the wort chiller. In the end, it worked out perfectly, since after the 1.5 gallons boiled I left the pot covered....it took around 3 hours for it to come down to the 80F-90F range on its own. While it was just a bit warmer than the wort when they were combined, I'm counting on it not mattering too much....we'll see.

Yeah, where is Parkerford Tom, anyway?

I use 1 step for sanitizing. It's quick, easy and cheap. I have found that the most important thing (especially when working with plastic buckets) is to clean with a soft cloth (no scrubbing brushes or abrasive sponges).

I generally use really hot water, one step and a soft cloth. It has worked so far (knock on wood).

I used bleach for the first couple of homebrew batches I did ... after that, iodophor all the way! I love that stuff. Easy to work with, soak and drain. As long as stained plastic doesn't bother you (or flashbacks to Army K.P.), it works every time.

Bleach is a nasty chemical.