Kennett Brewfest at a Crossroads? 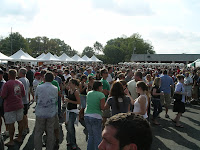 Congratulations to the fine folks behind the planning and execution of the annual Kennett Brewfest. In ten years, it has grown in to a highly anticipated festival that beer lovers put on their calendars as soon as the date is announced and buy tickets as soon as they become available months before the October event. (Here's a link to last year's wrap-up.)

The fact that ticket sales benefit the local organization, Historic Kennett Square, adds to the feel-good local nature of the event. And, of course, more attendees means more money to charity.

But, there has to be a limit. In my estimation, they've hit the limit and are at a crossroads. This event has become wildly popular, probably even beyond the organizers' expectations when they chose the current location two years ago. The relatively small space, the outrageous number of attendees, and poor signage (i.e. no "program") all contributed to an uncomfortable environment. Oh, by the way, I'm speaking of the general session and not of the connoisseur tasting. More on the latter...later.

If I had not attended the connoisseur tasting, I'd probably have been really annoyed. During the 4 hour general session (of which I stayed for an interminable 90 minutes, and had all of about 2 samples...that I actually waited in line for...the other 3 were the skip-to-the-front-of-the-line type of samples), upwards of 50 breweries were entertaining lines of 30-40 folks waiting to get 2 ounces of beer of untold style. I say untold because not only was it not always easy to decipher which brewery was under which tent (when standing at the back of the line), there was no clear signage as to which beers were being poured. Signs hanging high from the tent (the front of the tent) would be a preferred approach.

Sorry, but here comes a personal pet peeve (this isn't the first time you've heard this from me), how about some sort of directory/program/guide/map, whatever you want to call it? Something that gives people a clue about where to find what as it's spread out over the festival grounds. With so many people in attendance (though, I certainly don't think number of attendees should dictate a "program"), and lines stacked upon lines, there was no way anyone could get around to get a full inventory of the breweries in attendance and which beers they were serving. When the lines were as long as they were, it was safer just to pick a line, any line, and get into it hoping that you find a beer at the front of the line that you liked or haven't had before or wanted to try. Just a simple checklist....doesn't have to be fancy.

On the plus side, it seemed that the bathroom lines were shorter than in the past. Apparently, they added approximately 25 more this year, so that probably helped. 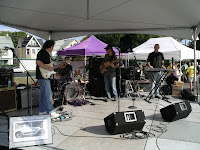 Back to the beginning. In the beginning, there was goodness in the form of the connoisseur tasting. Reportedly 300 tickets sold, close to 20 breweries pouring around two dozen beers, and good food included. I could quibble about the 90 minute duration, but I'll let that go for now. This session had a nice feel to it. Room to move about, never more than a few person wait for a beer, and very good quality food to choose from local business Talula's Table. While almost all of the beers are available to some degree on the 'open market,' the session provided a very comfortable environment to chat with brewery staff and other festival-goers while enjoying interesting beer and great music (Carl Filipiak Group, pictured above btw).

Since I'm not a festival planner (there are far smarter people out there than me for that kind of stuff) I'll only offer a couple of suggestions from my perspective. This is the crossroads that I refer to in the title line above. Many such events experience these growing pains. Ommegang, as one example, last year addressed such concerns.....to the delight of most who attended this year's version.

First, this festival has outgrown its current location. My solution would be to either change venue, limit ticket sales, or create a second general session. The current grounds simply cannot hold as many people as attended yesterday and provide a quality festival experience at the same time.

Oh, hello there, are you still reading? Or are you tired of what inadvertently turned into a rant? Really, it didn't start out that way. I did, on a whole, enjoy myself. It only turned out that there were several more notes of concern that presented themselves to me than I expected.

Well, I should mention my most pleasing finds of the day. It was brews from Vermont's talented Shaun Hill, formerly of The Shed. They were serving up a few beers that impressed and definitely put him on the map when touring through upstate Vermont. Paper City of Massachusetts was also a nice new discovery of the day. They were pouring the Blonde Hop Monster and Cabot Street Wheat. I heard nice comments about the new Oatmeal Stout from Julius at Dock Street in Philly, but did not have a chance to try it. Good reason for a trip into West Philly. The Harvest Pils from Victory impressed, as expected. So sorry that you had to wait 'til the very end here to get some tasting notes from the day. Next time I'll try harder!

p.s. while I was putting this together earlier, this response was posted at Beer Advocate to some of the postings of the same tone earlier in the day. I'll be interested to see how these concerns are addressed in the planning of next year's installment.

The lines were indeed insane. Especially in the once exposed sunny heat. Pretty certain this was unexpected but could surely be solved with ticket limiting. And BTW...there was a Festival map on the website which I printed out and carried with me. Also saw a few others doing the same. Extra expense for the event to pre-print for handing out? Maybe...I wasn't risking not having something prior so...

Overall? Good but wicked busy event. Hats off to Jeff and his wife and Co. for keeping it from turning into a melee though. And rest assured some changes will occur to keep this popular...and not out of control.

Shaun's beers made the event once again. So be happy for that little gem within.

Was there a link for the map? All I noticed was a diagram of tents with some sort of codes, but nothing that appeared to show names associated with the codes.

I'll gladly pay an extra quarter for a simple 8.5x11 sheet of white paper with the brewery names and beers printed on them. Even that alone, without a map, would have been a help.

Right on about Shaun's beers. I liked the t-shirts he was selling too. But, because of the crowds, I never made my way back to him to buy one.

You're definitely right about the civility. This event, even with the crowds, somehow maintains a level of civility that is appreciated. Appreciated too, is Jeff's graciousness in posting his thoughts and reactions over at Beer Advocate.

They weren't handing this map out at the gates? If not, maybe next year?

The large map was not distributed, according to Jeff. And, it was my fault for missing the (small) link on the website to get the brewery names to go along with the codes.

From a conversation this morning with Jeff, I have a good feeling that this year's festival concerns will not go unaddressed when planning for next year's installment. I wouldn't expect any less from the KSQ folks who have built the reputation of this festival to date.

Jackie and I attended the brewfest again this year and I definetly agree with the issues you noted. I hope that they address all of the issues next year! Seems like they added a few more food and merchandise vendors this year, which was nice. The music was great. Hopefully they can find a venue that offers a bit more covered areas or shade.

My favorite beer of the day was Mojo from Boulder Beer Co.