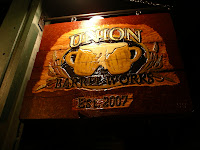 It was a great sight to behold earlier this week in Reamstown, PA. Union Barrel Works hosted their first "official" beer dinner and a group of over 40 beer lovers were there to experience it. The back portion of the main dining room was filled with the noisy chatter of a happy crowd. In less than six months, or thereabouts but who's counting, UBW has gone from an eagerly anticipated Lancaster County brewpub to a well-run establishment that's ready to host events. Not too shabby, I'd say.

Cohort Dennis and I made our way out to UBW for the 6:30pm dinner, making a stop at Stoudt's along the way for a pre-dinner beverage. John Matson and the folks at Stoudt's are readying the Scotch Ale for release any day now and making preparations to get the Winter Ale, a porter, started. A portion of it will be ready in the cooler weather while some will be stashed away in whiskey barrels (a la Old Abominable & Fat Dog, circa 2006) to be pulled out at a later date.

Wait, let's get back to topic here. I'll need to do a separate Stoudt's run, which is obviously long overdue. 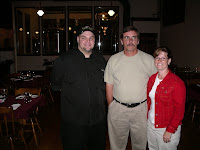 We were greeted warmly by UBW owners Tom and Amy Rupp, who appeared relaxed and ready to host their first beer dinner. Son David Rupp (Executive Chef) was also milling around as he was overseeing the kitchen operations for the dinner. The tables filled quickly and things were underway just shortly after 6:30pm. I've posted the menu before and it stayed the same as advertised. Go further down the page here to see it again. 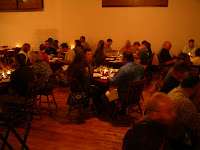 The first course got things started with fireworks. The mini Kobe burger was everything it's supposed to be. Not that I'm any kind of a Kobe expert, but wow! It was a very nice burger with plum ketchup and mustard on the side. It brought out a honey note in the maibock that it was paired with. The only thing wrong with it was its size. Oh, I guess that's why they called it 'mini.' The nice thing is that the full size Kobe burger is on the regular everyday menu which means I can get the big boy version next time I have dinner there.

Courses 2 & 3 and 4 & 5 were interrupted by a sorbet and a lemon jelly, respectively. The sorbet had a refreshingly sweet tangelo flavor and the tart lemon jelly was drowning happily in a hefeweizen foam. 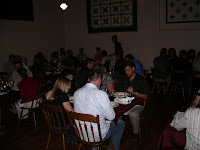 Bookending these intermezzo courses were a cheddar ale soup, a cod plate, and a pork tenderloin dish. Each was well done in their own right, though I think we all agreed that the perfectly tender and flavorful pork, paired with ultra smooth and creamy mashed potatoes, stood atop all of the others. The cod, to me, didn't quite measure up as the broth that it sat in helped make it "wet", but didn't help so much with the flavor. I'm glad to see that the cheddar ale soup also regularly appears on the dinner menu, as this is something worth having again....and again.

Many of my beer dinner reviews (most coming from Philadelphia's Monk's Cafe) conclude with glowing comments about the final course. It's usually a decadently sweet, often with chocolate, dish. They obviously got the word in Reamstown too! Paired with the Round Boy Stout and some of the best ice cream (from Udder Choice in Ephrata) that I've had in quite a while, this course nearly stole the show. And, that would be a bad thing, because why??? 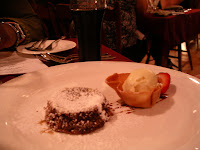 But, in the end it was the first course with the maibock that I considered to be best pairing of the evening. The burger and beer just worked naturally together as perfect complements. Following closely behind in a dead heat was the pork pairing with the doppelbock and the dessert course...but, of course!

Tom, Amy, David, and staff (Mark Brenner & sous chef Ian Newman in the kitchen) seemed so well prepared for this dinner. Astounding me more than the dinner itself was just how smoothly everything went. Sure, they've been in business now for around 6 months or so (though, Tom's been "in the biz" much longer than just at UBW). But, the table service and timing was just so.....right. I can't be any more descriptive than that. Watching the servers, their demeanors and interactions with the rest of us, it just appeared effortless (at least in the "front of the house"). Maybe the story was different in the back?

In fact, the Rupps have said that they were quite pleased with the night and are already planning for next month's beer dinner installment. That's great news for all of us. For those who wanted to wait and hear how the first one went, you're in for a treat next month. On 11/13, they are planning a "Wild Game Dinner." There will be a menu released in the coming weeks, but I'll leave you with one course, elk, as a teaser. The other meats that are being discussed I'll leave for when UBW publishes the menu. I think you'll be pleased. Will you be there? 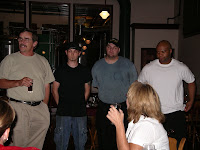 I thought you might like to know that the ice cream that you beam so much about was actually made on premises by the Staff, not by Udder Choice as the above article states, as I was told by my server and the staff that night.

While the ice cream may, at times, come from Udder Choice (a great ice cream in and of itself), that night's dish was devised and whipped up very specially in the kitchen of UBW...