When the Thunder doesn't Roll 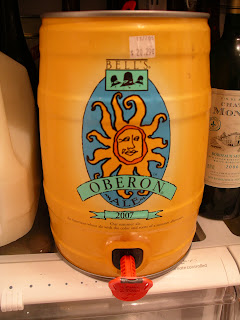 What to do when there's no significant Monday release party at Victory? Why, it means that I should probably invite some neighbors over for Monday Night Football, Baseball Playoffs, and Refrigerator Cleanout. See, I've had these two mini-kegs of wheat beer, one from Paulaner and one from Bell's just taking up space in the kitchen (sacré bleu!) refrigerator. Though, they did a nice job of keeping the milk, wine, and radishes in good company! Not only are they taking up space, but the "season" is kind of running out on these wheat beers. And, I certainly had no plans of aging them until next year.

I bought these mini-kegs from Exton Beverage earlier in the summer and they hold around 1 1/3 gallons (that works out to roughly 14 twelve ouncers). Plans to polish them off during a summer party didn't work out. Neither did my plans for a marathon fundraiser picnic/party. So, last night it was round 1. The Bell's Oberon was drained to leave about one beer remaining for tonight. I'd like to see how it holds up after have been opened 24 hours prior. Adam and I put in yeoman-like efforts and Patty contributed too. The other neighbors...not so much so! But, we definitely enjoyed this smooth wheat beer which still had mildly crisp and subtly spicy nature. It turned out to not be such a bad way to enjoy a cool fall evening watching football and playoff baseball.

Next up, the Paulaner.

It really isn't a typical wheat beer. It seemed heavier and heartier. Kinda reminded me of the Victory Moonglow..kinda.

Another party I missed!

Any recommendations on pumpkin
and or spice beers for the fall
season?

All of the Iron Hill locations are getting ready to release Pumpkin beers. Smuttynose and Southern Tier have both received high marks for theirs. The Dogfish Head, this year, seems more pumpkin-y spicy than ever. If more come to mind, I'll be sure to drop you a note....enjoy!

Its great to see that other breweries are packaging in that size container. I had previously only seen Heinekin, Worstiener (sp), and Bitburg (I think). I'll have to go to Exton to see the selection. Thanks for the tip!