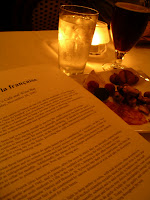 Dan Shelton (don't call me Kevin Healon) appeared at Chick's Cafe to weave stories of France's lesser known Bière de Garde style. It can be one of my more favorite styles and I was certainly looking forward to this event, hoping that my schedule would permit my attendance, ever since I first read of Chick's over at Suzanne's site.

It was nice to see Don's thoughts about the dinner. Because dufus (that's me) left notes and scribblings behind on the table, so it's all up to my memory...which is normally pretty sharp even without notes. But, without a proper dinner and several tastings of beer, weeeelllll let's see how that memory thing goes here. Or, I may take the easy way out and simply defer to Mr. Russell.

The great thing about Don is that he has this (award-winning) way of telling the truth in a tactful way, while letting the reader pass judgment on the subject at hand. Case in point...while I've previously had never sat through a presentation by Dan, his reputation certainly precedes him. I've heard him interviewed on Craft Beer Radio before, quoted in print, and criticized in online forums.

However, he has a business whereby he travels in search of good beer to import for our pleasure. So, I figured this was a chance to check out a new (new, for me) establishment, check out some French beers, and form my own opinion of Shelton.
Written by Bryan Kolesar at Wednesday, November 28, 2007