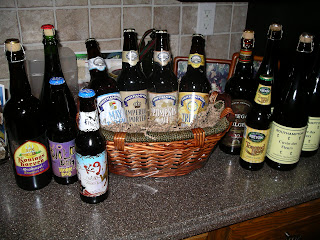 Some of you know that I've been attempting to clear out some bottles that don't hold up as well over time. (okay, the Bigfoot may not necessarily fall into that category.) You may have even received an e-mail from me asking if you'd like to take some off my hands. But, as things go, where there are empty spots, new beer will always find a way into them.

Either by gift (thanks Scott and Kathleen for the Southampton & Ommegang), package from brewery (as always, thanks Flying Dog), or my own doing (Koningshoeven, plus a new piece of glassware in the gift pack) the empty slots are being filled as quickly as they were vacated. Though, in my ever-so-humble opinion, I think the net result is higher quality.

As much as I look forward to dipping into each of them, the Flying Dog package that I received last week is quite intriguing. First, there's the result of the Open Source Project, an unlabeled "Collaborator Doppelbock." It's been recently released commercially, though I'm not quite sure how far ranging the distribution will be. Then, the barrel-aged barleywine, Wild Dog Barrel-Aged Horn Dog. This one's not ready for commercial release yet and, as such, is only available at the brewery. And, finally, the winter seasonal, K-9 Cruiser Winter Ale. These puppies aren't gonna sit around too long I promise you.
Written by Bryan Kolesar at Tuesday, November 27, 2007

In the far right hand side of the picture - is that Cuvee de Flor?

(my cuvee senses are tingeling)

That would be one for each bottle :) Guess next Monday night would not be the appropriate night to share it.

any chance you would save the bottle of Cuvee de Fleurs until I get back? I will bring you something special....

I forgot to ask. If you have had it in bottle, how is the Chocolate Indulgence tasting? I only had it at the Belgian fest in Cooperstown, not in bottle. I thought it was decent.