You kids buckle up and behave back there, because if I have to stop this car and come back there and...uh, drink...yeah drink you guys, you'll be sorry! 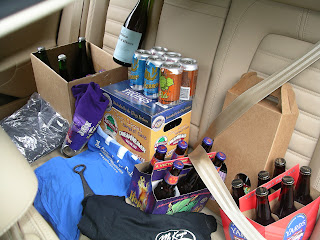 With 43 bottles of beer, or 638.4 fluid ounces, along for the ride, you've got to lay down the law early. That's the way the trip to Pittsburgh began. Safely stowed the brews in the car and westward we headed. Severe thunderstorms ruled the weekend and we found the first one half way into our trip in the mountains of central Pennsylvania.

We survived, but found ourselves in Pittsburgh too late to take in the Pirates game and opted instead for pre-dinner beer at Bocktown Beer & Grill and dinner at Sharp Edge Creekhouse. It was odd how folks thought my name, Bryan, resembled Bryson and they were excited to hear that he'd shown up after being told to get his self to both of these high-quality locations. Looks like for now, I'm two up on him in western PA.

More on these great beer spots, plus East End Brewing, in posts over the coming weeks.

After helping with Gratitude bottle labeling on Saturday morning at East End, we headed over to Bocktown to take my dose of ridicule for being a Flyers fan and to give away free beer from the wager. Turns out the 'Burghers don't like free beer...or that seemed to be the logical conclusion to make. They seem to prefer to pay for it instead at a Sharp Edge Belgian Beer Festival, occurring same bat-time. Or, they're still disappointed about losing the Cup and couldn't bear to be reminded of how their season ended. Nonetheless, we were prepared with the equivalent of 159.6 four-ounce samples of great beer. 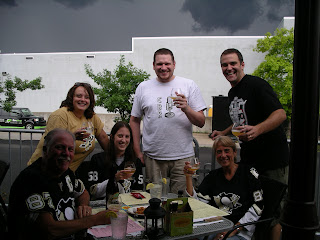 No worries, our small little group of beer lovers (and Penguins fans) gathered and enjoyed all of the beers sent to them. Perhaps most rewarding was to meet a young lady (seen seated at center in picture above) with brewing aspirations who was enjoying the beers, but not so much my Philadelphia presence...being a huge Penguins fan, as the jerseys should indicate. I believe her name is Amanda, so any of you brewers out there looking for some help, drop me a line and we'll get you hooked up.

By the way, everyone wearing a Penguins, Bocktown, or Craft Beer Radio piece of clothing scored themselves a 50% discount on all take-out beer. With a small little Penguins logo on my conference finals t-shirt, I was able to walk out with a $7 Penn Weizenbock, that of recent WBC silver medal fame. 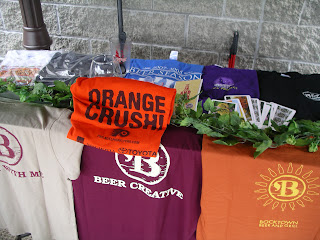 Every beer went down so well, from the Pilsners of Tröegs, Victory, and Sly Fox moving over to the Royal Weisse from Sly Fox stepping up to the Troegenator and over to the big, bad beers of Iron Hill (Cannibal and Old Ale, 2005) every one was hitting all the right notes with these folks. Scattered in between was the Biere d'Hiver from McKenzie, Fluxus from Allagash, and other beers from Tröegs, Victory, Sly Fox, Chimay, and Yards. The night ended with some big beers from Dogfish Head and a little something called Peche Mortel.

Clothing was given away from McKenzie, Grey Lodge, Sierra Nevada, and Sly Fox. And, one lucky guy went home with a handcrafted bottle opener from Monk's Café. 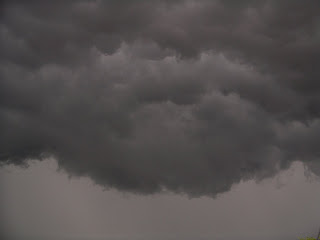 Smack in the middle of the festivities came yet another blast of nasty thunderstorms, moving us inside from the outdoor patio. It was a good transition to a sit-down dinner (to be covered in a future posting), when we began the wind down stage (sort of) of the evening.

All in all, this could have been better attended with a bit more hoopla and antics (where was the Pens jersey I was supposed to be shamed into wearing?), but then again those in attendance had a blast and some great beer they'd never tasted before. Plus, Patty and I had a great getaway weekend in Pittsburgh, adding 3 new beer spots to my résumé...Bocktown, Sharp Edge, and East End.

Oh, and could there be a cuter piece of clothing than the "one-sy" from East End Brewing, modeled by the lovely Allison Bearer (Jeff and Heather's recent addition)? Thanks to Bocktown and Jeff & Greg from Craft Beer Radio for hosting this little party. 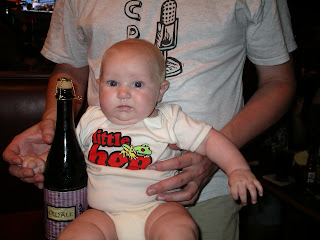 Fear not, it was just a staged photo. They all got put safely into their traveling spots for the long ride. The Biere d'hiver traveled pretty well, but the Cannibal and Old Ale from Iron Hill were all-around hits with everyone who tasted.

Great post! Man, I wish I could have made it, but, alas the BMX races over at South Park under the sun took their toll. However, my nephews kicked some butt and I left thinking I could hit to pro jump...well if I were 25 years younger and uh you get the idea.

Glad to see you made it back safe. I drove past Pittsburgh way late (or early, depending) and said a little prayer for your survival. Also, i'm plus one on the Amanda B. Advocacy.