Back in the New York Groove

Let's talk New York City. I certainly have not made as many trips to the Big Apple in 2009 as I have in past years. I kicked off 2009 waking up New Year's Day in the City that Never Sleeps---let's see how many of the city's nicknames I can use throughout this piece---after a 14 hour pub crawl around Manhattan on New Year's Eve the night prior. 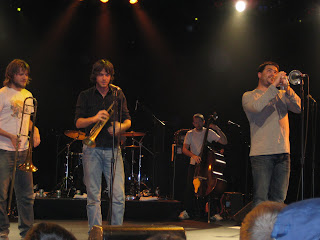 But, over the course of the ensuing year, I only returned twice, most recently at the beginning of December. I love finding relatively small and obscure bands and supporting their music through album purchases and concert tickets...does anyone say 'album' anymore? The Cat Empire is certainly not small in its native Australia, but here in the States when we first saw them 5 or so years ago, they were lucky to have a hundred people see them play clubs around Philly or NYC. Times have changed for the Band. Since playing large-scale U.S. festivals like Bonnaroo, The Cat Empire can now get U.S. crowds with numbers that include a comma. Anyway, that's a long way to describe why we were in NYC in early December...and also a way of encouraging you also to check out The Cat Empire. I truly believe that you'll find it to be both artistically-pleasing and soul-satisfying music. Now...drumroll...for the beer please. This was a drive-up and drive-back in the same day type of trip. It was also the same day that the snowy/icy weather came blowing through the northeast states. But, deterred we could not be. Fortunately, around 2 1/2 hours after departing northern Chester County, we were ascending from the subterranean parking garage in midtown Manhattan. 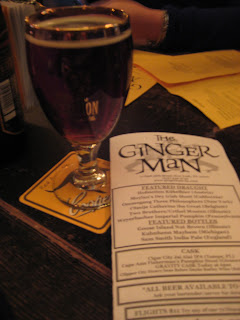 Off to Rattle 'n' Hum, er Ginger Man we went. Let's see, should I explain or not? Nah, never mind. Then I'd have to describe how it was possible that between the 4 of us and the cab driver, we couldn't find Rattle 'n' Hum on 33rd Street. Granted, it was raining/sleeting...but anyway...off to 36th Street's Ginger Man instead. This was my umpteenth visit to Ginger Man, which only tells you that it should be high up on your list as well. The food is never too much and beer list is challenging in the sense that there's way more good stuff to choose from than you'll ever be able to drink in one sitting. You're guaranteed to leave wishing that you had the time and the liver for just one more. A majority of our 10 beers were of the more local origin; this is something that Ginger Man pays attention to. Whether it's from Captain Lawrence, Brooklyn, Six Point, Blue Point, Southampton, Ommegang, Chelsea, and a bunch more that I'm just forgetting right about now, or whether it's from Pennsylvania (they love themselves some PA beer in NYC), Ginger Man has the northeast U.S. beer map covered right smartly. And they pay just as much careful attention to the goodies from overseas as well. For food, we dipped into the Charcuterie Platter and a couple of Giant Pretzels. Both were great starters to set down a bit of a base for the remainder of the day and night. The service? The service was just about perfect which continues the perfect track record of decent service that I always receive at The Ginger Man. Even though there had been a split in The Ginger Man family somewhere in the past between the NYC-based location and the other 5 sprinkled around Texas, this service comment has held true for me with my experiences at 3 of the 5 Texas locations as well as the NYC location. Come to think of it, I never wrote anything about Courtney Love and the Dallas-based Ginger Man, have I? (That's another one of them there lost notebooks that I never got around to sharing with you. Let's see if I can dust that off and get it out to you one of these days!) 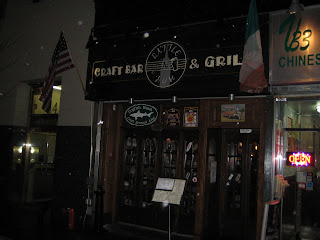 After putting in a solid almost 2 hours at Ginger Man, we ventured down south the few blocks that it takes to get to Rattle 'n' Hum. Much better success spotting it the second time around. 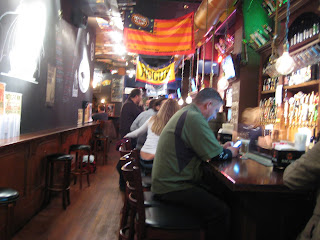 Butterfly Effect. Coincidences. Karma. Luck. Whatever you may call it, I'm always fascinated by what-ifs. What if we had arrived at Rattle 'n' Hum (grr, tired of typing that..from now on, it's RNH) two hours earlier? How would our day have been different? Would have we ever made it to Ginger Man? Would have we met up with Scott's nephew and his friends? How would have things been different? Would the service at RNH have been any different? 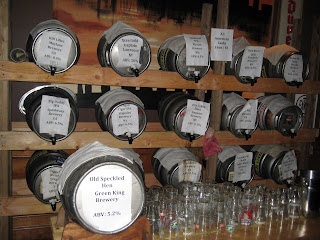 Therein lies my only complaint about RNH. And one that I won't elaborate on too much, since my informal survey around the trusty beer-cooler appears to indicate that our experience was an isolated experience. I'll simply leave it with "the food was good, the beer was great, the service was lacking." I can more than appreciate that a multitude of reasons exist for why my experience could be different from the person who was there an hour before or after me...at any restaurant...anywhere. I said that I wouldn't harp too much. There'll be a follow-up visit to either prove or disprove this particular experience. 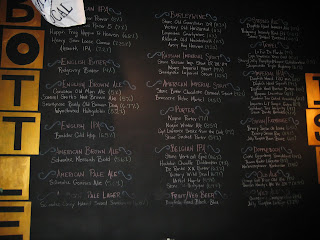 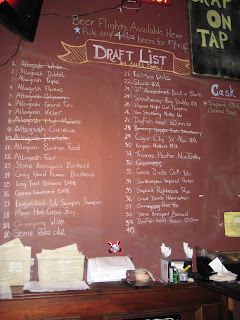 Everything else at RNH was just as I had hoped and expected. For a bar that has an iPhone app with up-to-date information on it, I found the beer and cheese list to be equally impressive. For a bar that partnered with local Alex Hall to put together an anniversary party that included a couple dozen of cask-conditioned beers, I was very satisfied. For a bar with a blog (and otherwise utilizes social media quite well) that updates frequently enough to keep its followers informed, I found the atmosphere warm and inviting. 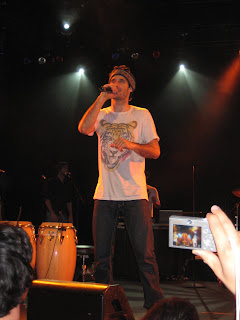 As you can tell, we ate and drank well in our two stops around Manhattan. We got out of RNH in enough time to make it over to the Nokia Theatre for The Cat Empire's 8pm concert...where there was not much good beer to speak of at all. That was fine, considering I don't normally drink too much, if at all, inside concert venues anyway. Plus, anyway, a drive home awaited me that it turns out that I, the driver, was going to be the only one awake for. Priorities.
Written by Bryan Kolesar at Saturday, January 02, 2010

all that looks like fun - kegs going, beer lists on the walls, good music...great!

Nice Post Bryan.
I just stopped at Rattle N' Hum yesterday and the service was a little spotty. This was an actual shock as the service when I was there the first time was absolutely exceptional. I will be returning again and I hop you do the same.

Three (or more) cheers for Rattle-N-Hum. This bar had opened my eyes to importance of American Craft Beers. Glad you enjoyed it as well. Also enjoy your blog.. thanks.

Absolutely, Kevin...I will be doing so. I need to get 'round to finding some new reasons to land in NYC...it's only 100 miles away, it shouldn't be all that difficult!