Day 8 Pictures are all included below 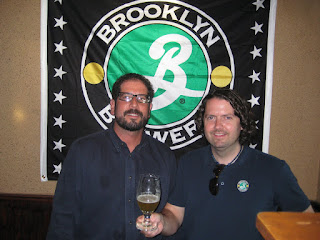 The Drafting Room in Exton became my first repeat venue of PBW 2010. Mainly because on my way out after the Bear Republic event the other night, I noticed those words Sorachi Ace on the door...and Black Chocolate....and Dark---Matter...and Blast....and oh yeah, it was a Brooklyn Brewery event on Friday night. Done deal. 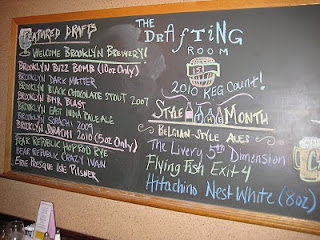 (A solid draft board greets customers at The Drafting Room)
Friday night didn't initially have anything planned for me. I'm basically tapering off in the second half of PBW '10. Too many other things to do and weather that just doesn't make it as fun to hang around drinking lots of beer, particularly high alcohol beer. No matter, it's still fun to try ;-)

So after work, I did a quick (couple-of-hours-quick) stop at The Drafting Room and shared a few nice beers with some friends that I just figured would be there. They did not disappoint. 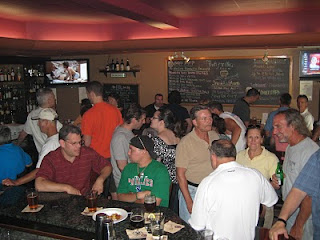 (A solid happy hour/PBW crowd filled the bar for a couple of hours on Friday night)
And the affable Mike Ferry from Brooklyn stopped in as well to chat with the customers and wait out the rush hour traffic before heading back down into the City for a night of "networking."

All in all, a good stop in my third suburban night of PBW '10. Today, once again nothing planned..but, as usual, we shall see. Hello iPhone, what sayeth? Keep it close to home, you say? TJs (hm, yes, let's see....BrewDog and Stone....hows-a-bout that, eh?)
Written by Bryan Kolesar at Saturday, June 12, 2010

Well, what do you know. Every once in a while, the Brew Lounge camera puts in a stellar effort! But, no,.....porn? The Delilah's events were only held in the city not the suburbs.