The Spirit of the Holidays at Teresa's Next Door

Last night at Teresa's Next Door in Wayne epitomized all that is good about the holidays. And it wasn't so much about the beer. Well, okay it had something to do with the beer, but perhaps not as much as usual.

It was about the people. Forgive me if that sounds a bit cliche, but it was 100% honest last night.

There are times when too many people at TND is just not a good thing....or I should say not good if you're stuck 3 deep at the bar in the server gauntlet. But, last night there seemed to be just the right amount of people there. Tables filled for the better part of the dinner rush, and then some. And a steady stream of two deep at the bar.

Enough to keep the staff (Andy, included) hopping, but not too many that we couldn't get a table within a half hour or so and still be comfortable standing at the bar.

We went there in search of a couple of seasonally-appropriate beers, most from the Shelton stable of beers....with names like: Tsjeeses, Black Albert, Red/White, Jolly Pumpkin Noel, EKU, and De Ranke to name a few.

I knew that we'd be meeting up with David McDuff, host of the excellent McDuff's Food & Wine Trail blog where he covers a lot of tasty goodness mostly in the world of wine. Though, he does stray into the beer world a couple of times a month and proves that he's got an appreciative palate for all well-made beverages, he has a firm grasp on the world of wine and his writing provides for enjoyable reading.

What I did not know was just how many other friends from across time that we would cross paths with. Some of them were quite surprising encounters. It's pointless to name names, simply because that's all it would be--or sound like--name-dropping.

Suffice to say, though, that our table for two turned into three with David and then five with a couple of unexpected (at least unexpected from my p.o.v.) friends of his. Then, Matt Guyer (beer retailer to the Main Line Stars and Wannabes) persisted on making it a booth for six. The number of friendly faces that passed by the table, seemingly one after another, was staggering. Twenty or more, perhaps? Sorta Cheers-like.

And, somehow, Sarah (yes, Sarah of Ortino's....Sarah of "Sarah Rocks" fame) kept up with the madness around our table and kept us well liquified.

Old Friends. New Friends. Great beer and Food. The perfect holiday celebration. Thanks to Andy and the entire TND crew for capturing the spirit of the season last night at Teresa's Next Door.

p.s. Even though I had my camera with me (yes, this time the battery was firmly in its place), I wasn't so much in the picture-taking mood--even with all of those friendly faces there. However, I did manage one inanimate picture of one of the suggested pairings of the evening: Seared Scallops, Foie Gras, cran-huckleberry compote, and La Moneuse Spéciale Noël. I know you all love the people pictures, but on this night I was in it for the people interactions on the other side of the camera instead. 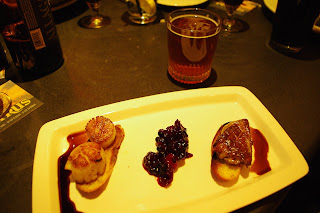 I'm glad you had a nice time. Sorry I didn't get a chance to meet you.

Matt G. was doing a good job controlling access to you :)