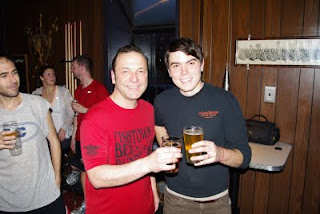 I teamed up with the Fishtown Beer Runners and Johnny Brenda's to provide a venue to introduce Jean Broillet's Tired Hands Brewery beer, which is not yet available for sale in Pennsylvania.

Later this year, that will change when Jean wields the mash paddle solo - commercially, at least - for the first time at his own brewery on Ardmore Avenue in Ardmore, Pa. 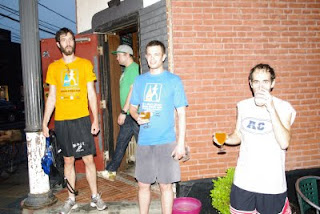 During the planning of every Beer Run that I've conducted, I'll get at least a sideways glance or two when I mention that I'm conduct an event where runners head to the intersection of beer drinking. All of my runs conclude with beer at the end. These are not "party runs", though we do have plenty of fun (usually).

No, the sideways looks I get are likely leftover vestiges of the old beer drinker stereotype. But, many who cycle, run, or perform other physically draining activities know that there can be not much more nourishing of a post-workout beverage than a glass of low-alcohol beer - session beer, if you will. 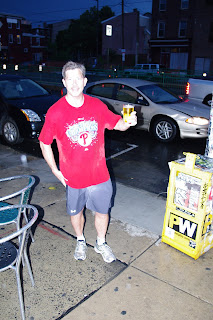 (Dave Casmay takes a beer with him on his cooldown walk)

David April, founder of Fishtown Beer Runners, knows all about that too. In fact, he's leaving tomorrow for Spain to meet with the inspiration for his beer running club.

That's why when Jean asked to share some of his beer with me I said something to the effect of "sure, I'd love to try it and so would a bunch of my running friends". 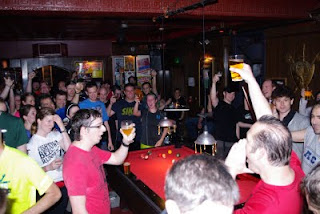 (David April toasts the runners, the bar, Tired Hands, and The Professor, the "inspiration" for Fishtown Beer Runners)

Then William Reed and his crew at Johnny Brenda's offered up their place to host the post-run beer event. Given that they typically have a handful of local and tasty session beers on tap, this seemed like the right night and the right place.

Tired Hands for Tired Feet is what we called it.

Approximately 50 or so showed up to do the run and then promptly drained the keg of Tired Hands Tabel (a spicy saison at 3.6% ABV) easily in less than an hour after they returned to Johnny Brenda's. Doing a rough calculation, there was one glass available for each runner.

After a delightful taste of Jean's beer, we moved on to other appropriate post-run beers like Sly Fox O'Reilly's Stout, Tröegs Sunshine Pils, Victory Lager, Yards Brawler, Tröegs Dreamweaver, and Dock Street Summer Session - all at or below 5.0% ABV.

All around there were plenty of winners. Johnny Brenda's with a nice chunk of business for a couple of hours. Tired Hands that got a vehicle to show off its future beer. And, runners who scored both free beer and a night of friendship through a rain-soaked run and a few post-run beers.

Next time a runner asks for a beer, don't be so surprised.
Written by Bryan Kolesar at Monday, May 23, 2011