The Session #51.5: Beer and Cheese, revisited 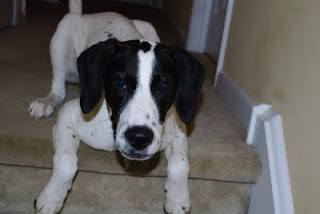 Did I tell you that we have a new puppy in the house? Either way, I can confirm that her love for cheese runs as deep as mine.

All I was trying to do was get the second half of the Great Beer and Cheese-off accomplished, and she kept interrupting. Fortunately, I never left her alone long enough in the room to get anything more than a large tongue-swipe of clothbound cheddar.

Her name is Callie. She's a rescue dog, of course, and pointer mix of some kind. She seems to be a beer and cheese buddy and hopefully she can become somewhat of a running buddy too. You'll, no doubt, be seeing more of her around here.

So, yes, moving along.

For those of you joining late, you may ask what this is all about .

I'll point you back to an article I posted two weeks ago on the first Friday of the month, where on a monthly basis beer bloggers/writer/enthusiasts "gather" on-line to discuss a common theme. One person plays host.

This month it was Jay Brooks and he created a two-parter for May 2011.

Two weeks ago, all participants individually selected beers to pair with specific cheese (or close approximations) that he recommended. Then we wrote about the experience. My experience that I created involved friends to get multiple perspectives and hopefully make the writing more interesting.

Now, for part two, he's asked us to try pairings based on other recommendations made two weeks ago.

In the past two weeks, I've gone from "tapering" into the marathon that I ran just this past weekend, to coming out of marathon-training mode and playing a lot of catch-up this week.

While I would have loved to get a group together again for the tasting, logistically I just couldn't pull it off. So, it was me by my lonesome plowing through beer and cheese tastings. I suffer for this "job".  ;-) 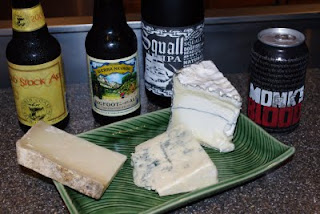 I also poured a Yards Saison ['11] from the tap and pulled out a bottle of Dogfish Head Squall IPA ['11] to serve as alternatives on the table in case any of the pairings were resounding strikeouts.

Here's what I found.

~ My Original Beer Pairing: Dogfish Head Indian Brown Ale
~ New Beer Pairing: suggestion courtesy of 99 Pours, where they remarked on the nuttiness of the cheddar and the caramelliness (spell-check won't like this, I'm sure!) of the beer. The suggestion was a North Coast Old Stock and I had an '06 in the cooler and this seemed like the right time to find out how it has been doing in there.
~ Compare and Contrast: With my original, personal selection, I was counting on caramel maltiness and significant hop bitterness to work well with the strong cheddar. The Indian Brown Ale wasn't really up to the challenge and was too distinctive in its own right. The Old Stock, though, was near-perfect. The only thing missing (simply due to 5-year-old aging, I'm sure) was enough carbonation to clear the palate of the cheese. Flavor-wise, though, 99 Pours was right-on.
~ Other potential pairings: My runner-up in this pairing was a Yards Saison, which was just spicy enough, just ever-so-slightly snappy enough, and just carbonated enough to play really well as a complement to the mildly barnlike qualities in the cheddar. From the list of other beers tried two weeks ago with this cheese, I might imagine that the Speakeasy Payback Porter that Jay Brooks recommended would also go well with this cheese.

Cypress Grove Chevre Humboldt Fog, $22.99 per pound, Arcata, CA
Our signature offering, Humboldt Fog® is an elegant, soft, surface ripened cheese. The texture is creamy and luscious with a subtle tangy flavor. Each handcrafted wheel features a ribbon of edible vegetable ash along its center and a coating of ash under its exterior to give it a distinctive, cake-like appearance. An American Original!

~ My Original Beer Pairing: Saison Dupont
~ New Beer Pairing: suggestion courtesy of Derrick Peterman at Ramblings of a Beer Runner, where he (and his wife) praised the classic fruit and cheese combination of 21st Amendment's Monk's Blood. I had a few cans of Monk's Blood still sitting around and it's a beer that I've got to know well over the past three years, first at the brewery with Mr. Sean Paxton, and particularly more so since it was packaged and distributed in cans last year.
~ Compare and Contrast: I knew going into this cheese that Saison Dupont would be difficult to beat. My hunch held up. Unlike my beer running brother from California, I was not at all pleased with the figgy fruitiness in the beer that was not spritely enough to help lift off the creamy butteriness of this amazing cheese. It became too much of a mush of flavors and textures on the palate.
~ Other potential pairings: With this cheese, Yards Saison stepped up even more greatly and played spoiler. It went real nicely with the mild tanginess of the cheese and was up to the challenge of scraping away the creamy cheese. The Old Stock from North Coast also did a nice job with its strong flavors and alcohol presence (it is 11.7% ABV, afterall).

Maytag Dairy Farms Blue, $18.99 per pound, Newton, IA
Made from cow's milk. It has been produced since 1920's when the Maytag's founded their family farm and began producing cheeses. Maytag Blue has a crumbly texture and it reveals a very spicy flavor. The period of curing and maturing takes six months.

~ My Original Beer Pairing: Sierra Nevada 30th Anniversary Barleywine
~ New Beer Pairing: suggestion courtesy of Stan Hieronymous at Appellation Blog, where he thought the Sierra Nevada Bigfoot Barleywine's deep, rich maltiness would stand up to the Maytag. I have several from 2007 remaining and it's been quite a while since I picked one of these out of the cooler to try. Another great opportunity.
~ Compare and Contrast: The first time around, none of my cohorts nor I seemed "up" for the challenge of the Maytag Blue cheese that particular evening. This time around, my palate was a bit more accepting and I was happy for that. I noted some of the sherry-like notes from oxidation, but maybe not as prevalent as by Stan. Nonetheless, Bigfoot fights big and extreme with big and extreme. I can imagine that this is one of the more difficult cheeses to pair any beverage with, but the Bigfoot does an admirable job.
~ Other potential pairings: From the list of suggested beer pairings from two weeks ago, I might think that Jay's suggestion of Russian River Temptation would work well with its Brettanomyces funk, mild fruitiness, and alcohol strength (7.25% ABV). Tom, at What We're Drinking, suggested Bam Biere from Jolly Pumpkin for the Humboldt Fog and I might imagine it also working well with the Maytag Blue.

What else did I learn? Well, I didn't necessarily learn anything so shockingly revelatory.

One thing, though, was that by reading through dozens of other suggested pairings from other respected beer folks, it reinforced the notion that beer and cheese is one of the most complimentary and enjoyable pairings in the world of food and beverage.

But, more so, that beer is so versatile and with the beauty and subjectivity of taste, there is nearly no wrong answer when it comes to perception of good and bad pairings.

And the other thing was that doing beer and cheese pairings solo is just plain boring. (But, thanks to Callie for trying to help in that regard.)
Written by Bryan Kolesar at Friday, May 20, 2011

Email ThisBlogThis!Share to TwitterShare to FacebookShare to Pinterest
Categories: Beer and Cheese, Beer and Food, The Session Project