Controlled and organized craziness at Victory on Dark Wednesday

I went to Victory for a growler fill up and a sandwich to go...and to witness the throngs of beer enthusiasts lined up for bottles of Dark Intrigue, the barrel-aged Storm King Stout. Bottles? More correctly -- cases, which was the per person limit again this year. Since it seemed that more is the new more and more is always better. So, yes, it was mostly cases going out the door one at a time.

Any thoughts of taking even a single bottle home with me were quickly dashed when I heard the line started at 6:30 a.m. (headed up by Rob, you may know him better as Amish Rob) and swelled to at least a couple hundred by the time the doors opened at 11:30 a.m.

Reportedly, the Storm King picked up a few percentage ticks in ABV from the barrel, nearing the 13% mark this year. If you like your Storm King and you like your Bourbon, I think you're gonna like this. A little heftier in body than last year, it's a smooth sipper with big Storm King and big bourbon flavor, but yet not overly boozy. All around, seems that the balance they were looking for was pretty decently struck.

Downingtown Dish, appropriately, has a quick summary of the mid-day's doings and some quotes from Amish Rob. (uh, er, and it looks like I've snuck into one of their pictures playing the delivery guy. Actually, there's a sorta funny story associated with that handtruck.) 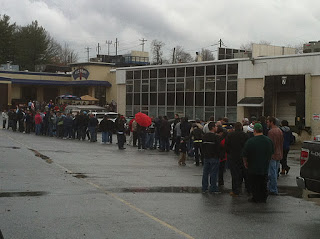 (If stretched out, the line likely would have reached Acorn Lane) 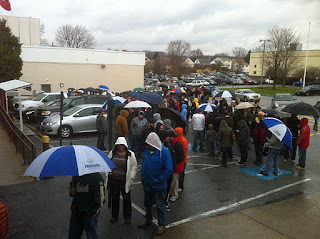 (Lovers of Victory beer, and more specifically barrel-aged Storm King Stout, lined up at the crack of dawn and braved the elements to secure the tasty beverage 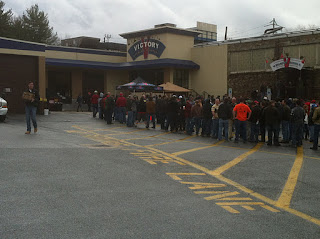 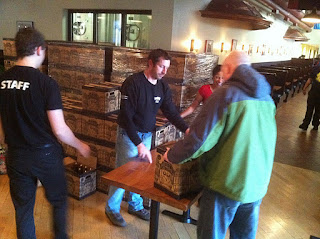 (Matt Krueger and other Victory staff manned the flow of Dark Intrigue out the door beginning at 11:30 a.m.) 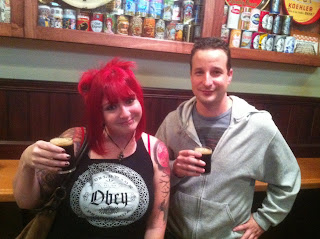 (Kate and Bob, Victory and barrel-aged beer enthusiasts, enjoy a taste of Dark Intrigue at the bar) 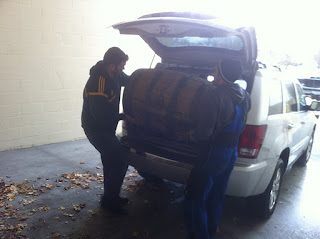 (Everything was priced to move, including the barrels used to age the Dark Intrigue)