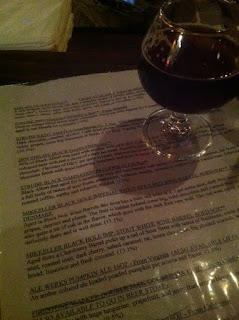 This weekend around the Philly beer scene (actually both lower case and Upper Case) saw a little bit of every kind of beer thing imaginable.

I did the whole Twitter thing, which, by now, I'm sure is getting to be a bit of a boring story line. Nonetheless...

I, as my human limitations demanded, stopped in at Iron Hill's 15th Anniversary Party in Newark, Del. and drank from a flight of firkins.

Then, I dipped into some chowders, porter, stouts, chocolates, and the like at Rolling Barrel's 2nd Annual Stout and Chowder Festival at Penn's Landing.

Great venue. A "welcome beer" on the elevator to the top floor of the Seaport Museum.

AND, Manayunk Brewing under the direction of Doug Marchakitus (head brewer) and Jeff McCracken (brewer) continues to impress.

I won't say that I was the first, but after I proclaimed the Manayunk Porter the beer of the night, I heard a half dozen of so others also make the same reference. Not to say there weren't other very good beers (Flying Fish's annual release of Grand Cru Winter Reserve impressed as always as did Dock Street's Satellite Espresso Stout....just two for-examples), but Manayunk's beers since Doug arrived from Iron Hill continue to remind us all that it would be unwise to overlook this Manayunk mainstay.

But, on to tonight. Yesterday, a major beer geek tasting took place at Capone's outside of Norristown. I suppose it was a bit of a warmup of what has become the Black Friday event around Philly.

In any case, I needed to pick up some bottles that they've held for me for quite some time and I figured it be good for a Sunday night dinner and to check out what "scraps" remained from yesterday's event.