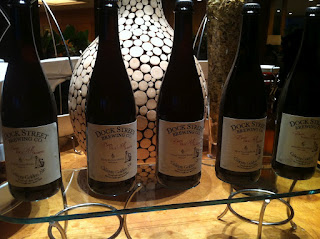 Now I shouldn't suggest that the latest in the series of collaborative brewing between the hotel's kitchen and the West Philly brewhouse is overly spicy.

Layered right through the beer, though, is a noticeable pepper spice kick that catches you ever-so-pleasantly in the finish. A bit more noticeable, in my opinion, than the last beer they did together, the Truffled Old Ale, which was a delight all of its own but a bit more subtle.

And that has been the common thread between the first two beers in this seasonal collaboration series, a deft balance of potentially strong flavors that still allows the beer to first and foremost be a beer. 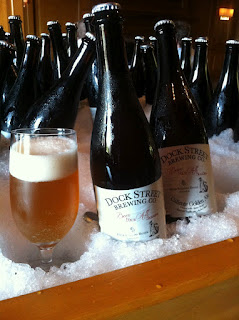 Last night, the hotel at Logan Square hosted Dock Street to unveil the new Caliente Golden Ale. Rosemarie Certo (owner), Scott Morrison (brewer), and Marilyn Candeloro (sales, marketing, and public relations) were all on hand to share the new beer and its background.

The beer, at roughly 7.5%, gets some of its ABV kick from the highly fermentable blue agave nectar which leaves barely any hint of sweetness. The pepper heat comes from Guajillo and Ancho chiles on which the beer "rested" for a few weeks.

For the release event last night, the kitchen whipped up some perfect accompaniments in the form of a citrusy shrimp ceviche and adobo chicken soft tacos. 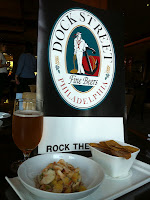 Fifteen cases are available at the hotel where I suggest you stop by for a try. At $14 per 750mL bottle, it is quite the reasonable offer and you get to experience one of the city's finest hotel restaurants/bars.

More of this second beer made it through production than the first, so if you care to try it on draft, Dock Street will have a limited amount of it as well at its 50th/Baltimore location.

You'll want to get this one while you can, because the third in the series — the summer seasonal — is just around the corner.

They're not ready to talk publicly about the brew yet, which gets underway this week. But, I've got some inside scoop where I'm safe to say that it should turn out to be a refreshingly flavorful beer (and, dare I say the word "session" without giving too much away?) perfect for a hot summer June 8 release during Philly Beer Week at one of the planned Four Seasons beer garden/brewery promo events.
Written by Bryan Kolesar at Tuesday, April 17, 2012