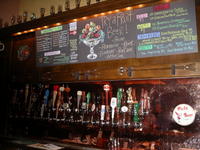 As I promised, we moved on from our first two average stops at Stout and Heartland to Ginger Man. We only had to walk a couple of blocks to 36th street between 5th and Madison. This is one of those bars that could be the one and only destination in many pub tours!

They usually carry close to 75 beers on tap and cover the world from local microbrews to high quality beers from Germany, Belgium, England, and other countries. Also at the bar, the number of bottled beers run well over 100 and several reputable scotch and whiskey selections are also available. So how can I boil this all down to a review that you can use? I think that all I need to say is that this place is a winner that hardly comes up short in anything they do.

There are 4 locations in the country; this is the only one outside of Texas. In Texas, there's a Ginger Man in Dallas, Houston, and Austin. I've been to the Dallas and Austin locations, but ran out of time on my way to the airport in Houston. While the ambience varies a bit from city to city, the overall theme is protected....the theme being a large selection of interesting, high quality beer.

In NYC, the location is in block which feels a bit secluded from other life in the city. While it's 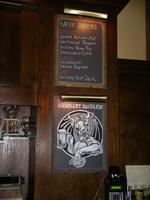 not in Times Square, it's not in a neighborhood either. It's kind of an "in-between" place, where the street scene is not all that interesting. But, of course, we go there to be inside with the beer, right?!

As you can see in this one picture, recent additions to the tap list include Geary Autumn Ale, Smuttynose Pumpkin Ale, Victory Prima Pils, Bear Republic Red Rocket Ale, and cask conditioned Victory Hop Devil. Patty had the Prima Pils and I had the Bear Republic. By this time, we started to work up a bit of an appetite and need to get a base going for the next several hours :)

The food menu basically is a sufficient list of appetizers and bar-style sandwiches. Each time I've been to Ginger Man before, I always fall for the soft pretzel. Hard to say why, but with a limited food menu, the pretzels seem to be any easy choice. And, for a couple bucks you get a decent sized pretzel, with lots of salt and a honey mustard dipping sauce.

A little more on the place and the staff. The interior is fairly large and airy with a mixture of bar seating, low tables with comfortable seating, and separate lounge-type room in the back. The staff is knowledgable and willing to lend themselves for opinions on beer, or to provide as many samples as you need to make a good choice, or to just to make small talk while business is slow. I've found these observations to be consistent at each of the locations that I've visited.

Earlier in the summer when I was at the Ginger Man, a few interesting brews that they had on tap included: Boulder Sweaty Betty; Six Point Diesel Stout; Schneider Edel Weisse; Einbecker Mai Bock; Redhook Sunrye; Cooper's Extra Stout; and Blue Point Hoptical Illusion. The picture above is a little dark and hard to make out the tap handles; however, I hope that from my descriptions you can see that the Ginger Man should also be included in any beer drinking plans when in Dallas, Houston, Austin, or New York City. Oh, how badly I wanted to stay for another one, or 10, beers! But, next, we're taking the subway to the East Village/Greenwich Village.

I think I need a way to download these blog entries onto my ipod. Just in case I need to refer back to them again whilest in NYC :-)

i was just at the ginger man in austin a few weeks ago. it is no lie... this is a wunderbar bier bar. i will just have to check out the nyc counterpart!